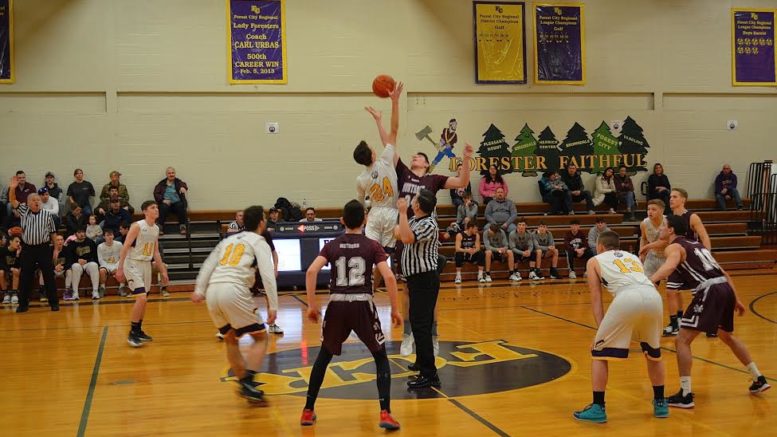 Lackawanna League play began Saturday for local teams with Mountain View and Forest City each picking up wins and Elk Lake losing at the buzzer to division favorite Lackawanna Trail.

Mountain View opened up Division IV play with a 52-35 win over Blue Ridge in the Tom Koes Memorial Game.

The Eagles opened up with a 12-5 advantage as Ryan Henke knocked down a pair of threes and Michael Fanelli added four points.

Fanelli took over in the second quarter scoring eight as he Jalique Gillyard both hit a pair of three-pointers as Mountain View extended the lead to 31-17 by intermission.

“We finally played selfless basketball,” said Mountain View Coach Joe Gibbons. “We were patient offensively and go the looks that we wanted to get as opposed to what the defense wanted us to take.”

Mountain View put the game further out of reach in the third quarter as Fanelli and Henke combined for 10 points and Mountain View led 48-23.

“We also defended with a sense of urgency in a manner consistent with the foundations of Mountain View basketball.”

Fanelli finished with 17 points while Henke and Gillyard each scored 14 to pace Mountain View.

The game was part of triple header featuring Mountain View’s Junior High, Junior Varsity, and Varsity teams to honor and raise money for the scholarship in honor of the longtime Mountain View Assistant Coach and educator.

Lightning struck again late as Lackawanna Trail’s Nico Berrios hit his fifth three-pointer of the game at the buzzer to defeat Elk Lake 59-57.

After the Warriors capped a fourth-quarter rally with their first lead since scoring the game’s first two points, Elk Lake knocked the ball out of bounds just past half court.

Berrios cut off a double screen at the free throw line to catch and fire from about 23 feet to break the Warriors’ hearts.

Elk Lake got off to slow starts each half as the Lions jumped out to a 24-12 lead behind Berrios’ 11 points.

The Warriors tightened down in the second quarter holding Trail to five points while Matt Mowry and Brant Marshall each scored eight to trim the lead to 29-28 at the half.

Josh Rzcidulo scored seven of Trail’s 19 points after the break as the Lions extended the lead to 48-36.

Elk Lake rallied in the fourth behind Trevir Graham who knocked down a pair of threes and scored all 10 of his points in the quarter as the Warriors outscored the Lions 21-8.

Trailing 56-55 Graham took an outlet off a missed Trail free throw and drove to the hoop to give Elk Lake the lead before Berrios’ heroics.

Forest City used strong middle quarters to pull away from Montrose 65-50 in their home league opener.

The teams battled back and forth in the opening quarter with Forest City leading 15-14 after the first quarter buzzer.

The Foresters opened things up in the second quarter outscoring Montrose 25-15 to tqke a 40-29 lead at the half and extended the lead after intermission outscoring the Meteors 18-6.

Jay Lipko and Justin D’Antonio each scored 15 points to lead the Foresters while Cade Hartman added 10.

Brian Teetsel and Connor Watkins each scored 15 to pace Montrose.

Be the first to comment on "Eagles, Foresters open with wins, EL rally falls short"