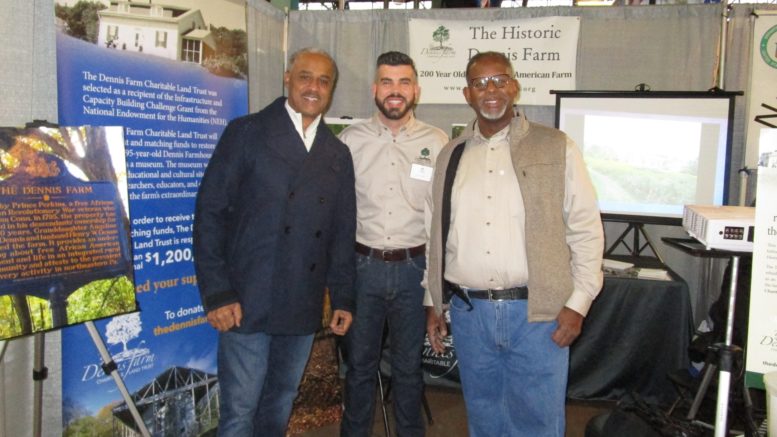 Lonnie Moore III (left) and Darryl Gore (right), direct descendants of the Perkins and Dennis families who settled the historic Dennis Farm in Susquehanna County flank Keystone College liaison Lucas Taylor at the Pennsylvania Farm Show, where they shared the story and information about their capital campaign last week. PHOTO BY RICK HIDUK

The organizers of the 2020 Pennsylvania Farm Show now have 104 years under their belts, having just completed another successful run, hosting more than 500,000 visitors at the Farm Show Complex in Harrisburg between Jan. 4 and 11.

One of the new PA Farm Show exhibitors, however, has them beat by well over a century.

Last week, Darryl Gore and Lonnie Moore III, two seventh-generation descendants of the Dennis and Perkins families who settled in Susquehanna County in 1793, were joined by Lucas Taylor of Keystone College to share the captivating story of the farm in Brooklyn Township operated by free African Americans decades before the Civil War.

In 2017, Denise Dennis, president and CEO of the Dennis Farm Charitable Land Trust (DFCLT), presented a slide show at the Farm Show and was honored with a plaque recognizing the Dennis Farm’s contributions to Pennsylvania and American history by PA Secretary of Agriculture Russell Redding. She was invited back as a featured speaker at the Farm Show’s Public Officials Lunch in 2019.

At the entrance to the Dennis Farm display in the Main Hall this year stood a large photo replica of the historical marker installed at the entrance of the site last summer, perfectly situated to grab the attention of Farm Show guests who might otherwise have passed them by.

“This sign has been a very good hook,” said Gore. “They read it and ask, ‘Where is that place?’ and that starts the conversation.”

“The fascination is that it’s in our back yard and no one knows it,” noted Taylor. As a non family member, he delights in the task of helping people understand that the Dennis Farm was not founded by freed slaves but rather by African Americans who migrated with thousands of other settlers from New England to an area that was hotly contested between William Penn’s family and the founders of the colony of Connecticut.

When Gore explains that he is a seventh-generation descendant, “that’s usually when their eyes light up, and they want to know more.” Free African Americans prior to 1840, he noted, represented less than one-tenth of one percent of the U.S. population, so it stands to reason that their story is still largely untold. “They were the exception rather than the rule.”

As Gore, Moore and Taylor shared the details of Prince Perkins and his service as a Revolutionary War soldier, his receipt of the land as a veteran, and the success of the Perkins and Dennis families as producers of maple sugar at a time when most sugar consumed by Americans came from slave plantations in the Caribbeans, listeners are captivated.

“They’re eyes are not glazed over,” Gore remarked. “They start looking at the rest of the display,” elements of which include a looping slide show and oral documentary and photos of many books and other family items that have been loaned to the Smithsonian’s National Museum of African American History and Culture.

More than once during the week, Gore was referred to by enthralled visitors as “a piece of living history,” a notion he absorbed with humility. “Aunt Hope (Dennis, who formed the Charitable Trust with Denise in 2001) always wanted us to retain our modesty,” he stated. “But we have to tell the story for people to know about it.”

Photos of the family cemetery, which is perched high above the original farmstead, inevitably bring on the question of whether or not the Dennis Farm played a role in the clandestine migration of slaves to northern states and Canada known as the Underground Railroad. Gore treads lightly on the topic because, for as many artifacts and recorded history there exists to support the possibility that the Dennis Farm might have been a stop on the road to freedom, there is no incontrovertible evidence.

“Henry Dennis was very concerned and knowledgeable about the Abolitionist movement and the Underground Railroad,” Gore noted. The family had a first-edition copy of William Still’s history of The Underground Railroad. The original Milford Oswego Turnpike that was a known route for escaping slaves ran across the ridge abutting the top of the farm, and nearby Montrose was a well-known destination. There remain several unmarked graves is what was known in folk lore as The Negro Cemetery.

“There are enough dots that can be connected,” Gore admitted. “There’s enough smoke to say that there might have been a fire.”

In addition to telling the story, the next step for the DFCLT is to raise $1.2 million dollars to unlock an additional $400,000 grant proposed by the National Endowment for the Humanities. Gore, Moore and Taylor strongly feel that their presence at the Farm Show provided a big boost to the recently inaugurated capital campaign, which was announced at the annual Dennis Farm Symposium held at Keystone College in October. Guests provided their names and email addresses to receive more information and to be invited to the 2020 Symposium.

“We might need a bigger room,” joked Taylor, who serves as director of docents for the DFCLT.