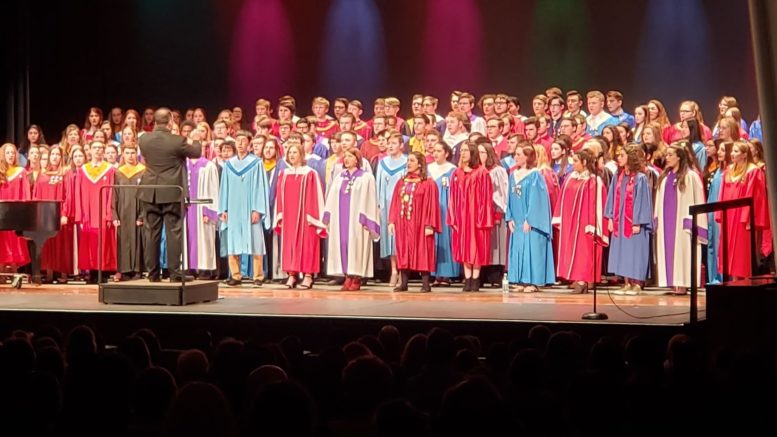 Students in grades 10-12 participating in the festival had been selected after auditions, and after arriving at Marywood University auditioned for to advance to the Regional Chorus festival.

In the meantime, long rehearsals filled the days and nights, while students learned their repertoire and gained an appreciation for a variety of choral music ranging from gospel anthems to folk airs to classical harmonies with lyrics in Latin.

Guest conductor was Joseph Farrell, director of choral music for the Derry Township School District and 2003 recipient of the Outstanding Young Conductor Award from the American Choral Directors Association of Pennsylvania. Farrell directs a variety of choirs in the Harrisburg and Hershey areas. The accompanist was Tsukasa Waltich.

Susquehanna Community choral director Theresa Marino said that it was one of the best choral concerts she’s heard in a very long time.  She said, “Two of my favorites – in terms of beauty and emotional response – were ‘Jenny Rebecca’ and the women’s piece ‘And Stars I Shall Find.’ Mr. Farrell was able to get these students to sing with precision, beauty, and emotion, no matter what piece they were singing. Even my die-hard band student who is new to chorus had an experience more fulfilling than he expected. All of my students came back a little more complete as human beings than they were before this event.”

Audience member Nicole Schake of Springville offered, “When the choir was singing ‘Psalm 23’ a capella, they hit the first crescendo and the music was filled with rich emotion. Tears involuntarily ran down my cheeks. It was stirring, moving, powerful, healing. It was breathtaking.”