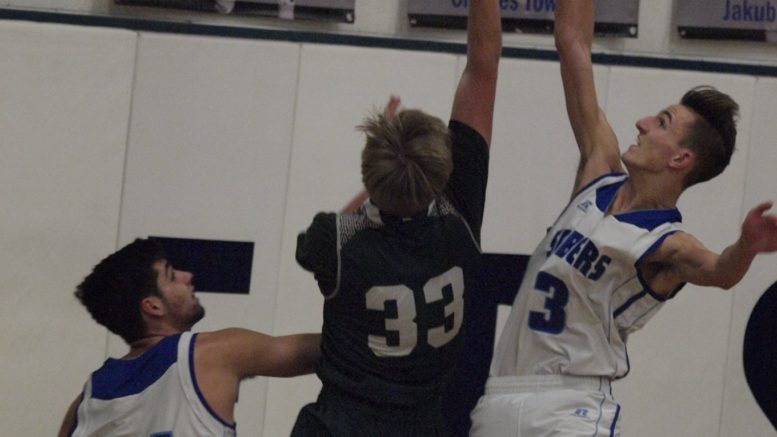 Elk Lake’s Brant Marshall (33) defends Susquehanna’s Gavin Baker during their game at Susquehanna. The Sabers defeated Elk Lake 41-37 to avenge an earlier loss to the Warriors. Photo by Tammy Mowry

Trailing 44-43 entering the fourth quarter Calvin Scheideler scored 10 points and Blue Ridge was 8-12 from the stripe to propel itself to the win. Scheideler hit a pair of shots from deep and added a drive to the basket and two free throws to lead the comeback.

Montrose coming off their first win of the season got the early jump leading 9-6 after the first quarter as Trent Leonard and Sam Stashko combined for seven points.

Blue Ridge came back to knot the game at 22 at the break as Ben Bleck scored six points and Scheideler and Carson Koehler each had four to offset five points from Montrose’s Connor Watkins.

Both offenses kicked into gear after intermission as Montrose outscored Blue Ridge 22-21 in an intense third quarter. The Meteors’ Alex Warriner got hot and scored all eight of his points including a pair of three-balls while Leonard and Stashko each connected from deep. Blue Ridge kept pace thanks to Gavin Rosa who scored nine points to pace the Raiders.

Schiedeler finished with 20 points and eight rebounds to lead Blue Ridge while Rosa added 16 points. Bleck had 12 points and Koehler 10 to join them in double figures.

Stashko paced Montrose with 18 points and Watkins finished with 14 and Leonard chipped in with nine.

Susquehanna rallied from a three-point halftime deficit and avenged a first-half loss to Elk Lake with a 41-37 victory.

The Sabers earned the early lead as Jakub Tomczyk and Garrett Decker combined for three field goals from behind the arc to give Susquehanna a 11-8 first quarter lead. Brant Marshall had four points for Elk Lake.

The Warriors stifled the Saber attack in the second quarter holding Susquehanna to two field goals while taking a 18-15 lead into the locker room behind four points from Matt Mowry.

After intermission Susquehanna took control of the game as Gavin Baker established himself inside forging his way to nine points while Tomczyk drained another three and added two free throws and the Sabers took a 29-27 lead into the fourth quarter.

Decker and Tomczyk were a combined four for five from the line down the stretch as the Sabers held on for the win.

Tomczyk finished with 15 points highlighted by the three threes and 4-4 performance from the line to lead Susquehanna. Decker had 13 points and Baker chipped in with 11.

Marshall and Mowry each had 10 points to lead Elk Lake as the Warriors were plagued by a 6-14 performance at the line.

Slow starts to each half doomed Mountain View in their 47-34 loss to Riverside.

The Eagles fell behind 14-7 after the first quarter against the Vikings backcourt of Brandon Reed and Michael Rickert proved problematic for Mountain View.

Mountain View cut the lead to 25-19 by halftime but Riverside outscored the Eagles 13-6 in the third quarter to take control of the game.

Michael Fanelli had 13 points to lead Mountain View who also got nine points from Preston Petts.

Lackawanna Trail used a 15-0 run in the second quarter to break open a close game and eased their way to a 57-35 win over Forest City.

Trail led 12-9 after the first quarter but after trading baskets the first few minutes of the third quarter Trail held the Foresters to one more field goal and led 31-13 at the half.