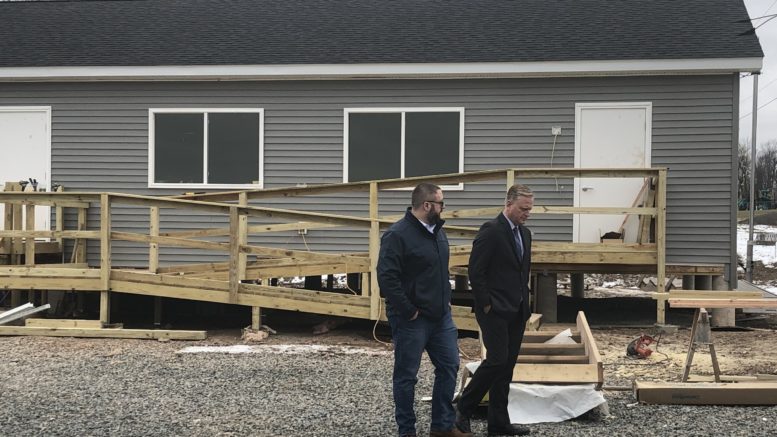 Bill desRosiers, of Cabot Oil & Gas, talks to Rep, Fred Keller (R-12th) outside the CDL program classroom, currently under construction on the Elk Lake campus. Students of the SCCTC have done most of the work on the classroom. STAFF PHOTO/STACI WILSON 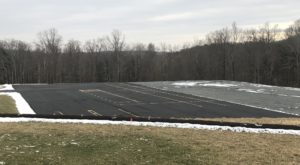 A pad has been paved on the Elk Lake campus to meet the testing standards required for those taking a CDL driving test. STAFF PHOTO/STACI WILSON

During a visit to Susquehanna County on Friday, Keller toured the CDL facilities and heard about the SCCTC’s partnerships that made the program possible.

The CDL program has been in the making for about four years, which SCCTC Executive Director Alice Davis said was “industry-driven.” Employers in need of commercial drivers had been asking the CTC to consider starting a training program. Knowing the demand for CDL jobs and their wages, the CTC got to work.

The tour took Keller, as well as Rep. Jonathan Fritz (R-Honesdale) and Rep. Tina Pickett (R-Towanda), down the road from the SCCTC to the driving practice and test area.

They were also able to see the two CDL classrooms, which SCCTC students constructed.

“I think it’s an outstanding opportunity for our students to have that right here in Susquehanna County, being that there’s so many jobs available in the truck driving industry,” Keller said.

An Occupational Advisory Committee has been helping the CTC formulate its CDL curriculum. Instructors will teach students how to drive box trucks, flatbeds and water tanks, both with and without water, culminating with their driving certification.

At the committee’s recommendation, the training will also incorporate electronic log books and trailer hookup.

Davis predicts the program launching by mid-March at the earliest. Students, who need to be at least 18 to enroll, could choose between a day course over five weeks or a night course over 10 weeks.

The program accepts 12 students per class and requires 150 hours of instruction. The $6,000 tuition covers everything, including the physical and drug tests needed for admission.

Davis has been interviewing applicants and plans to hire 10 instructors, varying between part time and full time.

The CTC has received funding assistance for the program and its facilities from local businesses.

“I think it’s a great opportunity moving forward and I really appreciate the business and industry helping us, because we wouldn’t have been able to fund this alone,” Davis said.

If a student fails the CDL test or isn’t prepared, Davis said the SCCTC plans to offer additional practice time. “We want this to be a class act,” she said.

Bill desRosiers, manager of external affairs for Cabot Oil & Gas, pointed out that besides Susquehanna and Wyoming Counties, the program could also benefit neighboring Bradford and Sullivan counties, as well as southern New York.

“It’s a family sustaining career and it can take you places,” he said. “Young people should have the option to choose where they want to go.”

Conservation topics centered around programs such as the Educational Improvement Tax Credit Program, which has helped support scholarships for CTCs across the state, and how more opportunities should be made available to fund technical education.

Those at the roundtable also discussed the importance of exposing students to career opportunities and helping them get ahead while they’re still in high school. The NTIEC accomplishes this through setting up internships, hosting career fairs and more, while Lackawanna College’s School of PNG allows students to earn college credits in high school.

The group also touched on how stigma associated with going into a trade rather than earning a bachelor’s degree has been eliminated over the years, but still has some ways to go.

Keller commended the SCCTC and its partners for already considering future improvements to the CDL program, such as adding a driving simulator.

Moving forward, he hopes partnerships like this between educators and businesses could serve as a model across the nation. As a member of the Education & Labor Committee, he plans to take what he observed on Friday back to Washington, D.C. to inform future policy decisions.

“We’re all talking about college debt, and here they found a way to make sure people have training for jobs that are going to be available for family sustaining wages,” he said.

Be the first to comment on "CDL program to benefit students"