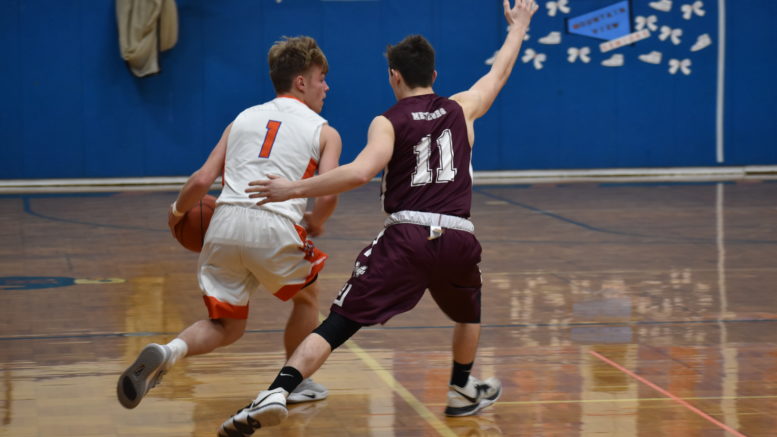 13 turned out to be the lucky number.

Mountain View’s Preston Petts (15) locks in on Montrose’s Trent Leonard (4) as he attempts to find an open teammate. Petts scored a game-high 21 points as the Eagles captured the LIAA Division IV championship. Photo by Corey Gesford

That was the number of years it took Mountain View’s boys’ basketball program to once again claim a Lackawanna League title.

Motivated by a spirited crowd that came to cheer on its seniors in their final game at the J. William McLaughlin Gymnasium for its seven seniors Mountain View came out of with intensity and a sense of purpose and rolled to a 56-33 win over Montrose to claim the Lackawanna League Division IV title.

Sprinting out to a 7-0 lead to force Montrose Coach Reggie Hawkins, Mountain View was led by the spirited play of Seniors Tyler Henke and Preston Petts who combined for 11 of Mountain View’s points as the Eagles finished the quarter with a 14-2 lead and showed no distractions from the Senior Night activities.

“Coach told us we had a job to do and to not let Senior Night get in our way,” explained Senior Guard Wyatt Brozonis.

Petts, normally the sixth man in the Mountain View rotation, added six more in the second quarter as Mountain View increased their lead before Montrose was able to stimulate offensive flow and led 26-10 at intermission. 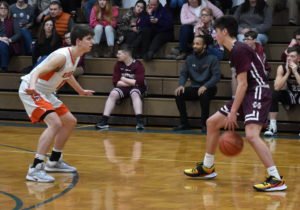 After the break Montrose postman Connor Watkins began to establish himself inside scoring all seven Meteor points and cutting the lead to 13 before the Eagles went on another run as Petts added seven more in the quarter and Henke chipped in with five and Brozonis drained a three to show there would be no extended let down and Mountain View found itself up 43-17.

With the final run Mountain View showed what the difference was between a senior-laden team and one relying heavily on underclassmen.

“I think it was all preparation,” said Henke. “Coming in the summer, getting our shots up, so we could hit the ground running.”

“It means a lot especially since my teammates are some of my best friends,” explained Alvord. “To come out here and win a championship together, and walk off the court together.”

The moment meant a lot for Coach Gibbons who not only is the first coach at Mountain View to win a division championship since Patrick Heaton won two between 2005-2007, but is the first since Heaton to coach a graduating class all four seasons.

“This means everything, when I took this job four years ago, the goal was to put another year up on the banner,” said Gibbons explaining what winning the division meant to the program.

“To send these guys out with a league championship is special,” added Gibbons.

Be the first to comment on "Emotions, experience push Mountain View too D-IV title Program claims first LIAA championship since 2007"