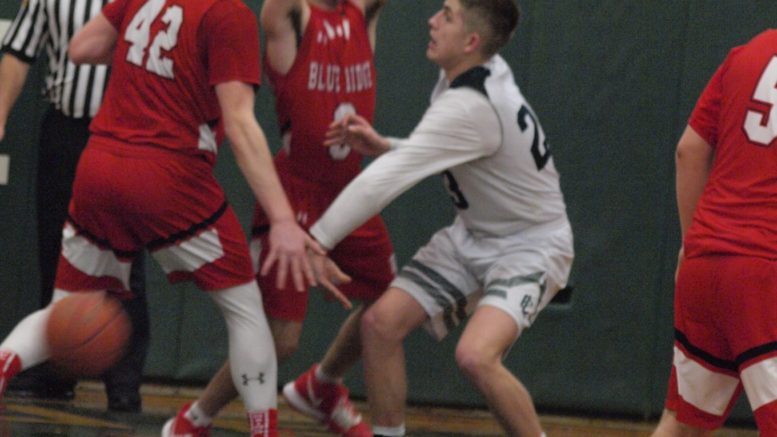 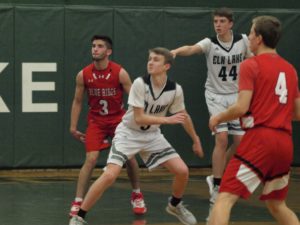 Elk Lake’s Trever Graham (3) and Wyatt Casselbury (44) and Blue Ridge’s Ryan Mills (3) and Ben Bleck (4) put four pairs on the ball in anticipation of it coming their way during the regular season finale. Elk Lake prevailed 60-58. Photo by Tammy Mowry

Leading 8-7 after the first quarter Elk Lake surged ahead as Brant Marshall and Trever Graham combined for 10 points and the Warriors led 23-14 at intermission.

The pace and scoring intensity raised after halftime as the two teams combined for 40 points in the quarter.

Matt Mowry scored eight points for Elk Lake while Marshall and Jacob Gustin each had four and Elk Lake pushed the lead to 44-33. Gavin Rosa matched Mowry with eight to keep the Raiders within striking distance.

The Raiders carried their momentum into the final stanza as Ben Bleck scored 10 points to lead the charge and Tyler Hillard hit a deep three to pull Blue Ridge within two.

After getting the ball back Blue Ridge attempted to enter the ball along the baseline but Marshall tipped the ball twice to deny the Raiders a game tying opportunity.

Marshall scored 21 in his final home game to lead Elk Lake and Mowry finished with  13 and Gustin joined them in double figures with 12 and Graham added 10.

Rosa led Blue Ridge with 17 while Bleck finished with 14 and Calvin Scheideler chipped in with 11 and Hillard had eight.

Forest City rallied from a first quarter deficit and outscored Susquehanna 41-19 in the second half to cruise by the Sabers 64-43 in their final game of the season.

Trailing 14-7 after the first quarter, Forest City cut the lead to one outscoring Susquehanna 16-10 to trail 24-23 at intermission.

Jay Lipko scored 18 points to lead Forest City who finished ninth in the District II Class 2A power rankings and were fell short of qualifying for the eight-team field.

Austin Dishon added 15 for the Foresters while Cade Hartman and Corey Daniels chipped in with 10 and nine respectively.

Be the first to comment on "Warriors hold on against Raiders"