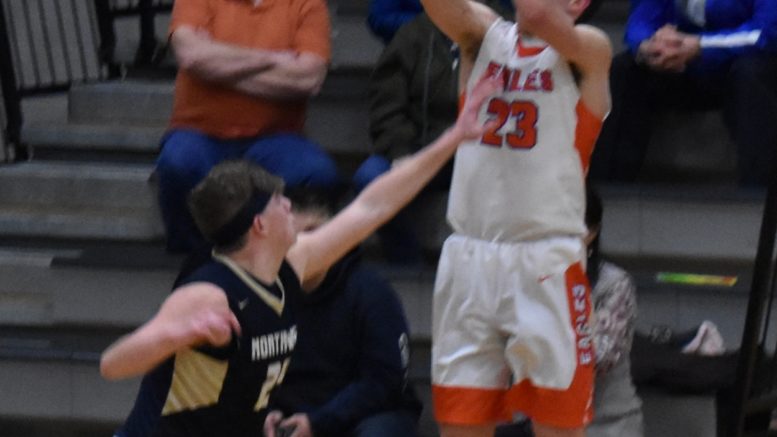 Mountain View’s Michael Fanelli (23) shoots over the outstretched hand of a Northwest Area defender in the Eagles’ quarterfinal win in the District II Class 2A playoffs. Photo by Corey Gesford

Wyatt Brozonis picked the right time to have a career night.

With the Northwest Area defense keying in on Mountain View leading scorer Michael Fanelli, Brozonis seized the opportunity scoring a career-high 25 points as the Eagels overcame a slow start and pulled away for a 56-43 victory.

Both teams got off to slow start shaking off playoff jitters and adjusting to a strange opponent. Brozonis scored the first four Eagle points and with Mountain View trailing 9-5 knocked down a three-pointer with 11 seconds left to bring the Eagles within one.

Brozonis stayed hot in the second quarter and after Preston Petts gave Mountain View their first lead since early in the first quarter at the 2:39 mark, Brozonis added another layup to give the Eagles an 18-15 lead going into halftime.

“What got me rolling was getting the ball to the basket and getting warmed up, and then testing my luck out at the three-point line,” said Brozonis.

After Northwest’s Walker Yaple tied the game at 20 early in the third quarter Jalique Gillyard sliced through the lane and gave Mountain View the lead they would never relinquish. Brozonis scored eight in the quarter as Mountain View pushed the lead to 37-31 by the end of third.

Yaple scored the first basket of the fourth quarter and Fanelli drilled a three from the right wing as the Eagles closed.the game out on a 19-10 run as Petts and Brozonis combined for 13 points.

As he has all season Petts brought inspired play off the bench and gave the Eagles a boost when they needed it.

“I just try to observe their tendencies and what their game plan is and when I get in try and counteract that ,” said Petts.

“It really came down to executing the game plan,” explained Mountain View Coach Joe Gibbons. “We knew they had certain tells on their backdoor plays and in the first half we just didn’t execute.”

Along with Brozonis’ career high Petts finished with 13 and Fanelli had eight.