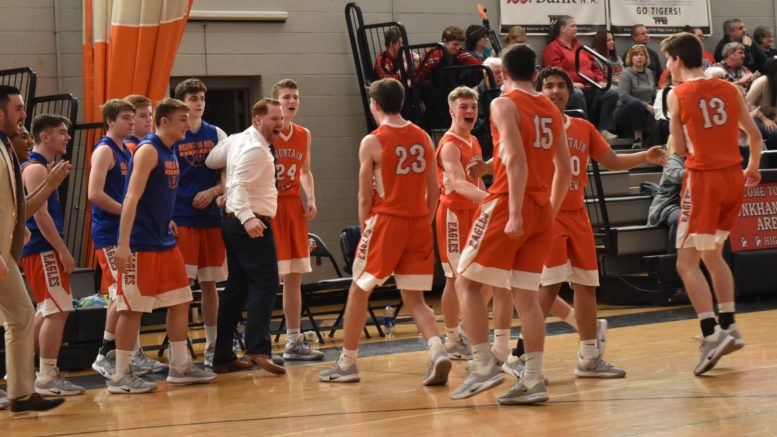 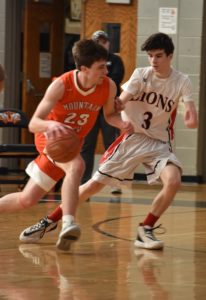 For over seven minutes Mountain View was nearly perfect in their defensive scheme.

After surrendering a driving layup to Lackawanna Trail’s Josh Rzcidulo Mountain View held Trail scoreless until halftime to take a 30-10 lead and then withstood a furious Trail rally in the fourth quarter to win 54-50 and earn a berth in the District II Class 2A championship this Saturday at Mohegan Sun Arena in Wilkes-Barre.

The Henke brothers got Mountain View going in the first quarter scoring Mountain View’s first 10 points. Ryan Henke scored the Eagles’ first bucket off a feed from Michael Fanelli and then Tyler Henke nailed a three from just off the right wing.

“I usually get a couple looks from behind the arc,” said Tyler Henke. “That first one I was pretty open, and it felt good leaving my hand.”

Ryan Henke then hit a short jumper and three of his own as the Eagles took a 10-6 lead to offset two threes from Rzcidulo. Trail’s Nico Berrios brought the Lions within a bucket before Preston Petts’ driving layup gave Mountain View a 12-8 advantage.

“As a team we all look for open shots and move the ball around to the best one, and it just happened to be me and Tyler that got them in the first quarter,” explained Ryan Henke

After Rzcidulo’s layup to open the second quarter scoring Mountain View went on a 18-0 run to close the half and leave the Trail fans silent. 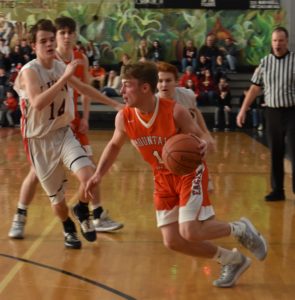 Mountain View’s Wyatt Brozonis (1) drives to the hoop during the Eagles’ 54-50 semifinal win over Lackawanna Trail in the District II playoffs.

variety of ways. But it was the Eagle defense that kept Division IV leading scorer Richard Helbing and the rest of the Lions off balance and contested

“We kept guys in front of us, and our help defense was in the right spots,” said Tyler Henke.

“I thought we kept our energy up, and were just really intent on not letting them score,” said Fanelli.

In the third quarter Trail’s offense revived itself as Helbing scored inside on a dropstep to the middle and Rzcidulo and Berrios combined for eight points and Trail cut the lead to 38-22.

In the fourth quarter Trail scored the first seven points before Petts hit two free throws to make it 40-29.

Helbing nailed a three with Fanelli flying at him and the Lions were under 10 points for the first time since the second quarter.

Mountain View seemed to take back control with four straight points as Petts converted a lob off a sideline out of bounds and Ryan Henke picked up a loose ball and scored on a lay up.

However, in his exuberance Henke was accessed a technical foul for unsporting conduct and Helbing converted two free throws to cut the lead to 44-34.

From there the Lions kept chipping away at the Mountain View lead forcing turnovers and converting on multiple possessions while Mountain View failed to put the game out of reach at the foul line.

Helbing hit a stepback three and Rzcidulo hit two free throws and hit Berrios for a layup off a steal to cut the lead to 51-47.

Mountain View regained some composure after Berrios’ score and Fanelli hit two free throws and partially blocked a Helbing three with 21 seconds left. When Berrios hit a three with seven seconds left to make it 54-50 Mountain View opted to inbound the ball to Petts who was fouled. After missing both free throws Petts and his teammates celebrated as a distant shot fell short and the clock expired.

While the Lions rushed back Mountain View relied on the faith and resiliency they had been taught to earn their first trip to the District final since the Seniors’ freshmen season.

“We practice against pressure every day for four years, and Coach just reminded us to stay the course,” said Tyler Henke.

Be the first to comment on "Mountain View headed to Mohegan"