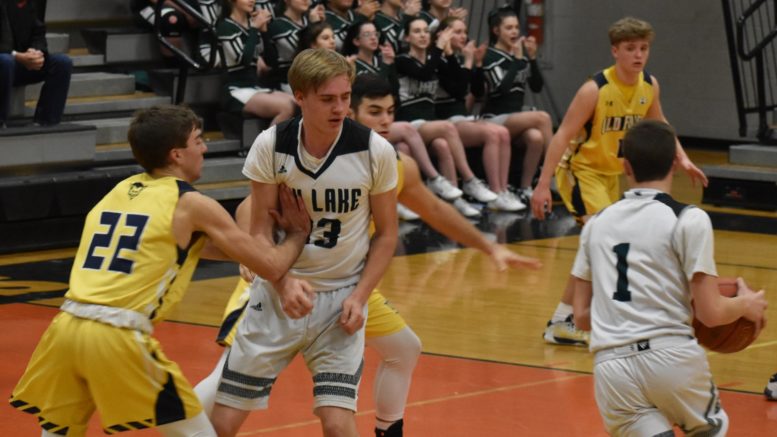 Elk Lake’s Jacob Gustin (1) utilizes a screen from teammate Brant Marshall (33) during Elk Lake’s District II playoff game versus Old Forge. The Warriors saw their season come to an end with a 59-52 loss.

Experience was the teacher for three of the local boys’ basketball teams in the opening round of the District II Class 2A playoffs.

A young talented Elk Lake team demonstrated guile and resilience before bowing to Old Forge 59-52 in the opening game of a doubleheader at Tunkhannock High School.

The Warriors jumped out to an early 7-4 lead answering an Old Forge three with seven straight points as Matt Mowry bookended a Wyatt Casselbury putback with a soft jumper off the glass and a three from 20 feet.

However, Old Forge would fight back with Dante Lucarelli and Sean Donavan combining for 12 points and when Donovan nailed a three to put Old Forge up 13-11 the Blue Devils would never trail again.

Old Forge extended their lead to 26-20 by halftime as Michael DiGregorio scored eight points in the second quarter.

After halftime the Old Forge lead ballooned to 32-20 but Elk Lake went on 7-0 run as Jacob Gustin scored five and Mowry added a layup to give the Warrior faithful hope. That enthusiasm was quickly extinguished, however as Old Forge went on a 10-4 run to finish the quarter and the more experienced Blue Devils seemed to take control and lead 42-31 going into the final stanza.

“They came out and put on a lot pressure, but mainly they just kept knocking shots down,” said Elk Lake Senior Brant Marshall.

But Coach Rich Emmons’ troops buckled down and chipped at the lead getting the margin down to seven points on several occasions before a Mowry three cut the Old Forge lead to 50-44. Trever Graham was fouled on a drive the next possession and hit the second free throw to cut the lead to five.

“I told the guys that as long as we continued to put pressure on, we could stay in the game,” said Emmons. “We were able to speed them up a little bit.”

After a DiGregorio free throw Graham buried a jumper from 22 feet, part of his eight points in the quarter and cut the lead to 51-48 and send the Warrior fan section into a frenzy with 1:25 to play.

“It took us a little bit to get rolling, and if we had got on our run a little sooner, we would’ve had a better shot,” said Graham.

Old Forge’s Donovan buried two free throws to push the lead back to five, but Marshall answered with an offensive rebound and score that would be the last Warrior bucket. The Blue Devils finished off the scoring icing the game on the line.

Mowry led the way for Elk with 16 points while the steady Marshall finished with 14. Graham, added 11 and Gustin chipped in with nine.

Graham explained that despite the loss he and young teammates that will return next year gained from the experience.

“I think it makes us really hungry for next year,” said Graham. “We know we’re supposed to be here, this is what we were made for.”

Emmons and Graham praised the group of Seniors that included not only Marshall but Jason Mowry and Pierce Forkal.

“This group played for our Seniors, that was their motivation,” said Emmons.

He continued to explain the value of each Senior even if it wasn’t always seen on the court.

“Everyone recognizes Brant, and what he has meant for us, but if you ask anyone in our locker room who are the most popular players, who treats their teammates with the most respect, Pierce, Jason, and Brant are the first three names mentioned,” noted Emmons.

“Those guys’ value can’t be calculated, it’s just off the charts,” added Emmons.

“They meant everything to us,” added Graham. “The led us, provided the energy we needed and were always positive.”

Marshall, who entered the season with seven career varsity points and tallied 333 on the season, stressed the value of the team’s growth and the closeness between the upper and under classmen.

“The experience I had was fantastic, I couldn’t have asked for any better teammates,” said Marshall. “I love each and every one of those guys in there, we fought together through everything.”

Be the first to comment on "Youthful Warriors rally falls short"