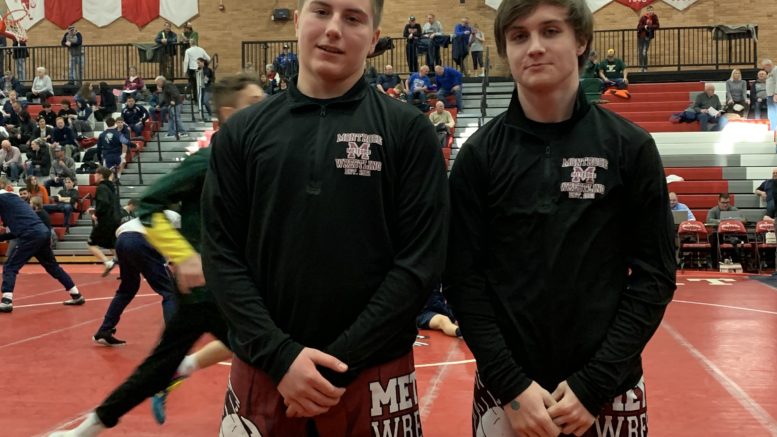 It was a tough trip to Billtown for local grapplers at the North East Class 2A Regional Championships, as none of the four area wrestlers advanced to next weekend’s PIAA Championships in Hershey.

Wrestlng at Williamsport Area High School Blue Ridge’s Eli Aldrich and Jordan Williams and Montrose wrestlers Dylan Geertgens and Derrick DeMann found that the next step in the quest to reach the PIAA finals is a whole different level than the previous weekend’s District II championships.

“The competition down there (regionals) is not comparable to District two,” said Aldrich. “Just the energy down there is different.”

Williams, the District II runner-up at 170 pounds squared off against Canton’s Timothy Ward. Williams held his own throught the first period but almost midway through the second Ward put the Blue Ridge Sophomore on his back and recorded a pin at the 3:25 mark.

In his following match Williams was eliminated by Mount Carmel’s Shane Weidner. The Senior earned a 6-0 decision over Williams.

Aldrich suffered a quick loss at 220 pounds when Southern Columbia’s Max Tillett put the Blue Ridge Senior on his back 52 seconds into their match.

“The way I usually wrestle didn’t work,” said Aldrich. “I didn’t dictate the match or the tempo.”

In his first consolation round match Aldrich fell in the second period to Tunkhannock’s Nick Marabell.

DeMann found out how difficult the wrestling is for a Freshman at the upper weight classes when loss to Canton’s Garrett Storch. The Warrior Senior earned a 15-0 major decision over DeMann early in the final period.

DeMann then faced District II champion Frankie Scranta in the consolation round and the Tiger Sophomore major decisioned DeMann 8-0.

Geertgens, who finished third at 126 pounds the previous weekend, suffered a 15-0 technical fall at the hands of Mifflinburg Junior Gabe Gramly. Gramly would go onto capture third place and earn a trip to Hershey.