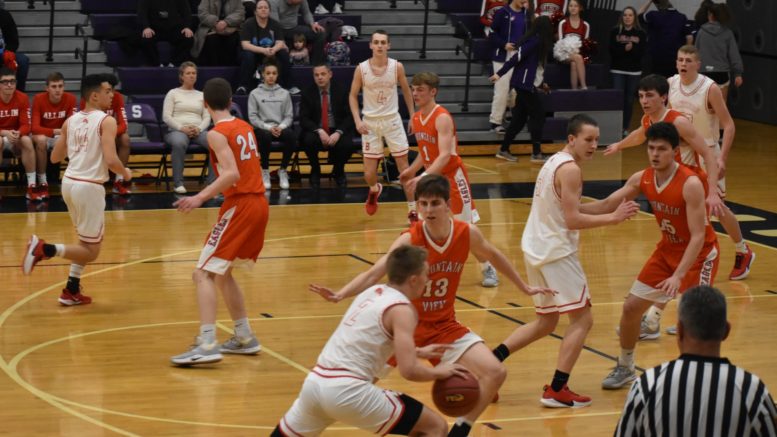 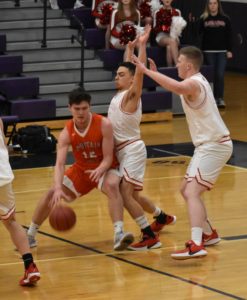 Mountain View’s Preston Petts (34) powers his way to two of his team-high 19 points in the Eagles’ PIAA Class 2A first round game. Mountain View fell to Bloomsburg 48-45 in overtime. Photo by Corey Gesford

basketball team. This time he almost saved the season.

Despite 10 fourth quarter points from Petts Mountain View fell in overtime to Bloomsburg 48-45 in the first round of the PIAA Class 2A playoffs.

Petts who has come off the bench every game except Senior Night brought his trademark energy and athleticism to the Eagle offense early in the fourth quarter when Mountain View found itself trailing 37-28.

In a span of two minutes Petts scored four points and took a charge on the defensive end to lift the Eagle faithful off their seats and renew the spirit of his Mountain View teammates.

“I didn’t really think about it, if the ball came to me, I would try and make a move and get to the rim,” explained Petts.

“I’m so proud of Preston, from where he came from last year, not seeing a lot of minutes,” said Gibbons. “He was essentially a sixth starter, but we felt his energy and athleticism coming off the bench was a little better for our team.” 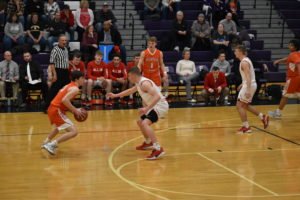 After Petts’ first five points cut the lead in half to 37-33 and forced a Bloomsburg timeout, Michael Fanelli was fouled on an offensive putback and made one of two free throws to cut the lead to one possession.

Petts sandwiched a Bloomsburg score with a bucket and a free throw to make it a 39-37 game.

After a couple empty possessions for both teams Wyatt Brozonis buried a three from the corner, his only field goal of the game, to give the Eagles their first and only lead.

Bloomsburg’s Cade Klinker answered with two of his game-high 25 points and then Bloomsburg forced a Mountain View turnover.

The Panthers then held the ball over a minute before Klenker was fouled driving to the basket and made the second of two free throws.

Petts answered with his tenth point of the quarter off a spin move with 20 seconds remaining that eventually sent the game into overtime.

After each team started with an empty possession Bloomsburg struck first when Adam McGinley cut off a screen at the high post and found room for a layup to put the Panthers up 44-42.

“We knew they had that set, and our plan was to switch it on top toward the ball side and get into the passing lane,” explained Gibbons. “We were just a little too antsy to get into that passing lane.”

Mountain View made one final run when Fanelli took a feed from Tyler Henke and was fouled. After converting the first, Fanelli’s second shot fell short but a determined Petts grabbed the carom and laid it off the glass to cut the Bloomsburg lead to 46-45.

Klinker got to the basket for the final score and gave Bloomsburg some cushion at 48-45. Fanelli’s three from the wing fell short and Petts attempted to draw contact on the putback to no avail.

The final of 12 minutes of thrills did not seem likely earlier in the game.

Bloomsburg opened with the game with 7-0 lead and seemed to set the tempo of how the game would be played.

But thanks to four points and an assist from Fanelli the Eagles closed the quarter on a 9-4 run to trail 11-9 after one quarter and trailed 21-18 at intermission.

The Eagles comeback was attributed to the return to their game plan and their defensive principles that provide a league championship and an appeanace in the District II Final.

“We finally kept people in front of us, and I reminded them about the game plan,” said Gibbons. “We wanted to send two guys to the offensive glass and three guys back to stop that transition because we knew they love to run.”

After halftime the teams traded baskets before Bloomsburg went on a 10-3 run to go up double digits.

However, as he has all year Fanelli answered with five points in the final half of the quarter to keep Mountain View in striking distance.

The spirited Fanelli stoically explained after the game his mindset.

“I knew we needed to keep our composure and control the tempo,” said Fanelli. “I just tried to keep everyone in check and do what I had to do.”

“Mike’s our leader, he’s been our leader for two and a half years,” said Gibbons. “He did everything in his power to not let that game get to where we couldn’t come back.”

The resiliency came as no surprise to Gibbons who praised his Senior captain.

“If I was in a foxhole, and I could pick anybody to be my buddy, it would be Mike Fanelli,” gushed Gibbons.

Despite the end of the road for the Eagles the players and coaches appreciated the path they had taken together.

“I love these guys, there’s just no words to explain what it’s been like,” said an emotional Petts after the game. “It’s been like having another family.”

Coached Gibbons talked about the path his six seniors, Fanelli, Petts, Brozonis, Henke, Jalique Gillyard, and Dakota Alvord and what they’ve meant to the program.

“A wise coach, I had in High School told me it’s not about the destination, it’s about the journey,” reflected Gibbons. “I told those guys in the locker room that we’ve had one helluva journey.”

Be the first to comment on "Mountain View rally falls short in OT Seniors, Petts, Fanelli take Eagles to verge of upset"