For three minutes Mountain View looked poised and confident, a much 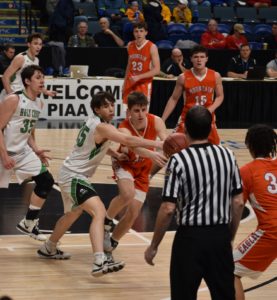 different team than what their opponent Holy Cross had faced in the season opener in December. Then Holy Cross showed that they had grown too.

Leading 4-0 midway through the opening quarter the Crusaders scored 11 unanswered points and set the tone for the rest of the game, forcing the Eagles into turnovers and rushed shots meanwhile cutting and driving to the basket always a half step ahead of a Mountain View defender.

“We weren’t ready for their physicality and intensity defensively,” explained Mountain View Coach Joe Gibbons. “You try your best to simulate it in practice but it’s extremely difficult to do that.”

Mountain View managed just four shot attempts the entire first quarter and turned the ball over 12 times in the first half.

“They came out with a lot of aggression and quick double teams to take passing lanes away,” said Mountain View point guard Jalique Gillyard.

Two minutes into the second quarter and after two more Holy Cross field goals Michael Fanelli finally put Mountain View on the scoreboard with a short jumper. However, the Eagles did not soar from there managing just five more points while surrendering 13 to trail 32-7 at the half. 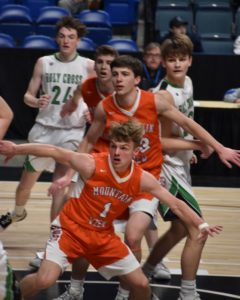 During the push to the Lackawanna League Division IV title and run through districts Mountain View received timely three-point shooting from its methodical ball movement and willingness to pass up a good shot for a better one, but Holy Cross’s pressure inhibited that and forced the Eagles into a woeful 2-17 from behind the arc the entire game.

“We got outside of who we are, took a few shots we don’t normally take,” explained Gibbons. “We didn’t move the ball; we didn’t reverse the ball the way we needed.”

Fanelli led Mountain View with 11 points on 5-10 shooting while the rest of the Eagles shot a woeful 3-22.

With the loss Mountain View finds itself playing Bloomsburg in the first round of the PIAA playoffs Saturday 2:30pm at Shamokin Area High School.

Despite the disappointment of falling in the District final both players and coaching staff were confident that the Eagles can get back on track and find success in the state playoffs.

“We just get back to practice and do what we do and know we have something to work for,” said Fanelli

“We get back to what we did that made us successful this season and hammering those points home, we’ll be ready for Saturday,” said Gibbons.

Be the first to comment on "Mt. View overwhelmed by HC intensity"