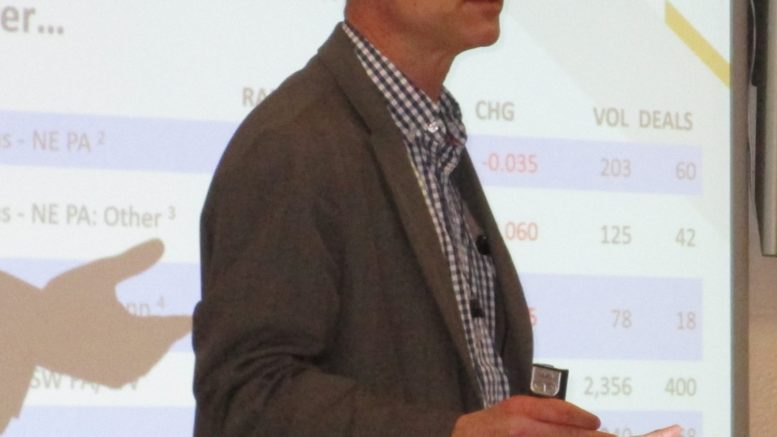 Daniel Brockett of Venango County provided comparison of the natural gas industry in different parts of the state and nation in one of many workshops offered by the Penn State Extension at Ag Day on March 6. PHOTO BY RICK HIDUK

Workshops and presentations offered by Penn State Extension educators and other experts at Susquehanna County Ag Day garnered record attendance on Friday. Among the 18 choices was a timely discussion by Extension community development specialist Daniel Brockett titled “What Shale Owners Want to Know.”

Participants included lease holders from both Susquehanna and Bradford counties, for whom Brockett provided some good news among sobering statistics. Using current market data, Brockett explained how continuously advancing technology is allowing companies like Cabot, Chesapeake and SWN to make profits while their counterparts in western Texas and other regions are floundering.

“Ten years of a conventional well won’t get you three months of what your wells are producing,” Brockett said in reference to lateral drilling in the Marcellus shale. “Companies in the Permian Basin are literally paying to take the gas from here.”

Royalty checks are smaller than they once were for a number of reasons, including a glut of natural gas on the market and not enough ways to get it out, combined with a mild winter. “We are overproducing in a big way, because peak energy use is usually in the winter,” he said “Why do they keep producing if they are losing money? Because the companies have to generate cash.”

The gas industry in Susquehanna County, in particular, Brockett noted, is different than even the rest of Pennsylvania. “You have more activity,” he explained. “Your producers here are more profitable because you have an abundance of gas.” Improvements in drilling techniques have reduced the time needed to complete a single well from months to weeks to days.

While most gas companies are planning to spend less over the next two years, Brockett expects an uptick in activity here as companies return to pads that are already producing to plug more wells. Other noticeable changes, Brockett suggested, will include longer well bores; more fracking stages, and “walking” more rigs across gas pads for another plug, rather than completely dismantling and moving it to another site.

Whereas, there can be as many as 30 wells on a pad in Greene County, he noted as a comparison, “your pads in Susquehanna County usually have four to six.” But there’s room for more. “If they find more formations,” Brockett explained, “That could double.” There are two layers of Marcellus, separated by the Purcell Limestone. Cabot and SWN have done some test wells and have found the upper Marcellus to be very productive.

“Your upper Marcellus still beats the heck out over everybody else,” Brockett remarked. Royalty checks may not immediately reflect the increases, as they are generally a reflection of what was happening three months ago. But Brockett believes that many local wells will be back among the top 100 producers by the end of the year. Currently, 53 of the highest producing wells in Pennsylvania are in Susquehanna County, followed by 26 in Bradford County and 17 in Wyoming County.

Renewed activity is necessary in many cases, said Brockett because many of the earliest leases are set to expire. “It’s time for them to come back and drill or let you out of your lease,” he stated. Companies aren’t as quick to file a “release of lease” at the county courthouse as they were to file the original leases. Brockett cautioned landowners to be vigilant of their lease status and contact the county Recorder of Deeds if they suspect their lease has expired. “But you have to pay for it. Find out the exact amount and take cash.”

Even landowners who have not been let out of their leases should look for subtle changes. “There’s no perfect lease. But, if they are changing the language, you should talk to your legal council,” Brockett advised.

Because gas is a more regional commodity than oil, which is traded many times, that which is extracted in Bradford and Susquehanna counties is worth more where it is right now. New England is currently relying on Canada for the gas needed there by residents and paying handsomely for it.

In the future, more of the local gas will be compressed into its liquid form (LNG) to make exporting it overseas more profitable. Some will be used to produce fertilizer and other fuels, and much more of it will go to power generation plants.

Despite the growing desire for renewable energy and pledges by major corporations like Google, Microsoft and Amazon to be “carbon neutral” by 2030, the technologies are not yet fully developed, Brockett sees their goals as a bit ambitious and expects natural gas to hold its own for many years to come.

“Natural gas is probably a good partner with renewables,” he related. Solar, wind and water power are all intermittent resources dictated by nature that cannot meet peak demands. Little power is generated and stored on cloudy or calm days. Hydroelectric power is dependent on fluctuating river levels. And battery storage, is nowhere near the technical level needed to solve the problem.

“We will still need gas or coal to meet those needs,” Brockett maintained.

Be the first to comment on "Penn State educator offers advice, reassurance to shale gas owners"