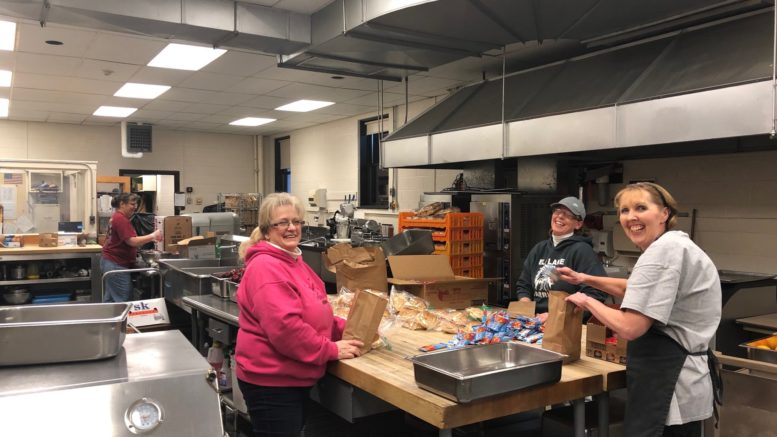 School districts are working toward mitigating hardships students and families are facing during mandatory shutdown due to COVID-19, but those who live farthest from the schools are also the most difficult to reach.

The Elk Lake School District began distribution of free breakfast and lunch last Wednesday. As school faculty members tracked where the families were coming from, it became immediately apparent that the meals were not reaching children in the Meshoppen/Black Walnut area in Wyoming County and those in Middletown Township.

“We’re very concerned about making sure those kids are getting food,” said Dr. Ken Cuomo, Elk Lake superintendent. “We are focusing on our students and any younger non-school-age siblings.”

According to Cuomo, the district applied to the state as plans for food distribution were being developed “because we are now technically operating outside the school year.”

Parents of students must also apply and sign a waiver via an online registration form at www.elklakeschool.org. “It’s the best way for us to track meals and numbers and locations of where people are coming from to see how we may modify our program moving forward,” Cuomo related. “We need to make meals accessible to all areas of our district.”

After providing two meals per day Wednesday through Friday for those who were able to get to the schools, Elk Lake’s program changed this week to two single pick-ups on Monday and Wednesday, when families were given meals for two and three days, respectively.

“Our cafeteria staff has been amazing,” Cuomo remarked. Some of the 10 employees who are going to the school each day to prepare and package the meals are driving considerable distances to do so. “This is above and beyond their contract. Their efforts are huge. They are putting kids first.”

Cuomo and fellow administrators understand that distance may be the biggest factor for those who reside in the southern- and northern-most parts of the district. It is hoped that two pick-ups per week will alleviate some of the stress incurred by parents in the outlying areas and that they will be able to make the two trips to the school.

“We’re building this plane as we’re flying it,” Cuomo conceded. “We may have to decide to set a delivery location in the Middletown and Meshoppen/Black Walnut area.”

Another consideration for administrators and the food services department to figure out is how much food they have in stock, how long it will last, and when and where the next deliveries of food items  – including milk – will come from.

The Susquehanna County Career & Technology Center is, of course, also shut down. The timing could not be worse for those anticipating the opening of the new CDL Driver Certification School, where classes were set to begin on March 30.

According to SCCTC executive director Alice Davis, many of the new students were preparing to leave their day jobs during the course of enrollment.

They were contacted individually and urged not to take a leave of absence from their current employment at this time.