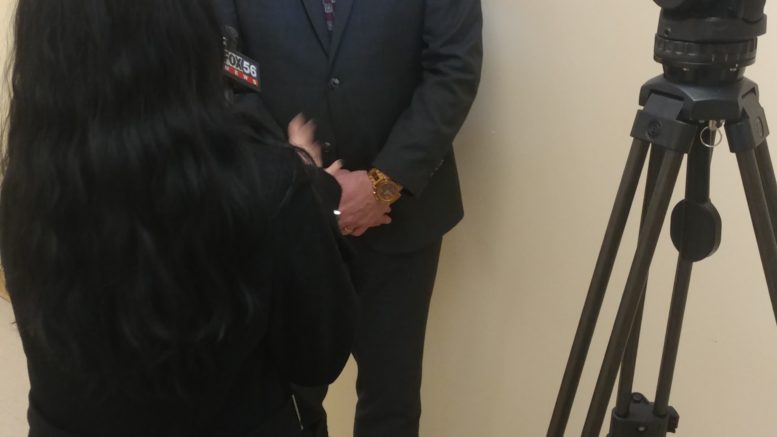 Last week’s visit to Endless Mountains Health Systems by U.S. Representative Fred Keller (R-12) kicked off a busy week of government activity aimed at calming a worried public and keeping them safe from the novel coronavirus, or COVID-19.

On Tuesday (March 17) Keller met with top hospital management at the 25-bed acute care facility, one of the county’s biggest and busiest, to assess how the federal government can assist smaller, rural health care providers like EMHS.

Congress has passed an $8.3 billion supplemental bill including over $7.8 billion for COVID-19 dedicated funding, said Keller, a member of the House Committee on Education and Labor. Keller took his seat last year in a special election to fill the vacancy caused by the resignation of Tom Marino.

“We should be serious.  We should be combating this thoughtfully following the CDC guidelines and the Department of Health, but we should not panic because I think we have very capable and competent people,” Keller added.

“Of that funding $4 billion will make diagnostic tests more readily available, support treatments to these symptoms, invest in vaccine development and procure vaccines when they are available,” he said.

“This is a difficult time for all of us as healthcare workers and it is only to protect our patients and ourselves that we have changed the policy,” reads a notice on the EMHS website.

“Right now we have had no confirmed cases of COVID-19.” hospital CEO Loren L. Stone told Keller last week, saying that EMHS was continuing to follow and emphasize CDC guidelines such as frequent hand washing and social distancing.

While EMHS is only a 25-bed facility, its small size actually helps it, Stone said.  He explained why.  “My response is that I think we’re more able and more prepared. Because we’re a smaller organization we’re very nimble; we don’t have to go through several levels of bureaucracy in our organization.  We can pull a team together and act on something.”

At the same time he acknowledged that its small size also exposes an unfortunate vulnerability.

Annually, EMHS averages 7,500 emergencies, 1,000 admissions and 42,200 office visits.  On Monday, March 16, state health officials reported 479 COVID-19 cases in Pennsylvania. One week later, on Monday, March 23, that number had increased to 644, with no positive cases reported yet in Susquehanna County.

But as the virus continues to spread worldwide and more and more reports come in on health care worker exposure to the virus, for employers the related issues of keeping employees safe and on the job have emerged, Stone said.   School closures, fear of contagion and other issues may also affect staffing levels, he observed.

Blaine Dibble, is a longtime member Health Care Coalition of the Northeast, a consortium of health care providers in this instance linked by mutual aid agreements.

“That sharing mechanism has been out there for a while,” Dibble said.  “And we have daily phone calls to update everybody on what everybody’s status is.  We know which hospitals are going to restrict visitation first and where everybody is on a day to day basis.  We’re out there to help each other,” Dibble explained.

Paula L. Anderson, the hospital’s human resources and public relations chief, said she was encouraged by the good working relation EMHS has with other area health care providers as everyone anticipates longer, more restrictive measures in fighting COVID-19.

“We are anxious to hear what the Senate may pass on some of those bills that are coming out so that we can provide some resources to our staff,” Anderson said.

“We realize there are many challenges to come,” she said.

Keller told Anderson that proposed federal legislation would if signed into law eliminate co-pays for those insured and uninsured who sought to be tested.

“If somebody needs a test it shouldn’t be a barrier for them,” he said.

Jeralyn Adams, the hospital infection control head, joined Stone in lauding both the CDC and the state Department of Public Health in continuing to provide directives and updates.

“Because that gives us the confidence to impart to our staff that they can be confident that the CDC and the Department of Health has their welfare in mind as well as the welfare of our patients,” she said.

“It’s nice that we have concise directives as to how to handle this in every situation and every type of exposure and potential exposure,” Adams said.

Mary Mushala, the hospital’s chief nursing officer, said that she has been busy working to keep patients and staff up to speed on the latest COVID-19 updates.

Mushala, like every other health care professional these days, reemphasized the basics.

“Like everyone else in the room says: wash your hands, keep the social distancing and keep at home the best you can and we’ll get through this,” she said.

EMHS’s rural setting might lead some to the conclusion that it is “safer” and somehow insulated from spreading infections than larger city hospitals, especially as the county has yet to officially log its first case of COVID-19.  Stone jumped to dispel that notion.

“That is I believe a little bit of a misconception because we’re rural, to get to services like shopping or other things we do travel outside of the area a lot to access shopping, entertainment, etc.  We’re a much more mobile society than we were.  As much as we’d like to think we’re shielded in rural areas, we have just as much vulnerability, especially when your workforce commutes out of your area to larger metropolitan areas an hour away,” he said. “We hope that we don’t see a case, but we aren’t immune from it.”

“We hope that we don’t see a case, but we aren’t immune from it,” he said.

At the same time, Stone said the cautionary messages don’t mean that everyone should run to their doctor and demand to be tested.  Unless you are demonstrating upper respiratory symptoms, Stone said that response could do more harm than good.

“The concern is that if there’s just community-wide testing it’s going to slow down the labs processing of ones that may actually be important for making clinical decisions about a patient’s condition,” he said.

Until more capacity for testing becomes available, physicians will have to be vigilant in deciding which patients get COVID-19 testing, he said.

In a related development, last week Keller lashed out at Gov. Tom Wolf for ordering all non-life sustaining businesses to immediately close, shutting off potential customers from goods and services and workers from their paychecks.

“Unfortunately, your order came with no notice, limited details, and insufficient explanation.  It has injected chaos and uncertainty into an already trying time and placed more concerns on employers and workers,” read a letter Keller sent Wolf.

Wolf later delayed enforcement of the order until Monday and enlarged the list of businesses that were allowed to stay open.

To those shopping at those stores still open, Dibble offered an observation.

“You don’t need 14 loaves of bread.  It’s going to go stale or get moldy or rot on you over a period of time.  I don’t want to say ‘Calm down’ because that’s a quick way to make people angry, but, you know, ask yourself – is this something I would normally do?”

Be the first to comment on "EMHS, gov’t officials offer COVID-19 update, guidance"