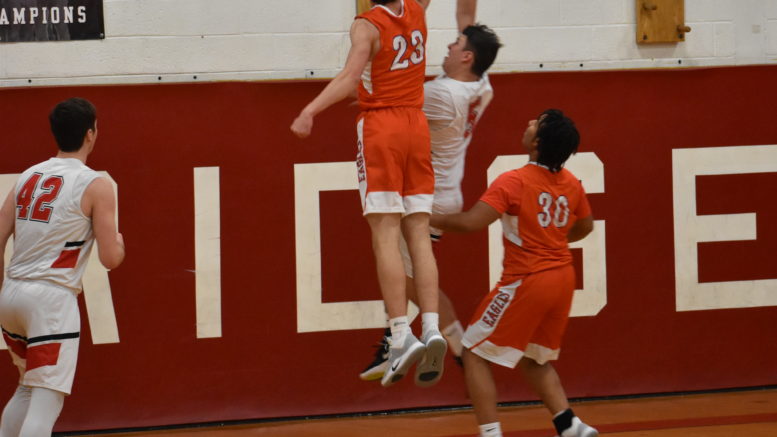 Mountain View’s Michael Fanelli (23) elevates to block a shot against Blue Ridge during their contest earlier this season. Fanelli was selected LIAA Division IV Player of the Year by division coaches. Photo by Sue Gesford

Once again, an Eagle stands perched at the top.

Elk Lake’s Brant Marshall (33) defends Susquehanna’s Gavin Baker during their game at Susquehanna. Marshall was selected to the first team by the LIAA Division IV coaches. Photo by Tammy Mowry

Mountain View’s Michael Fanelli was selected Player of the Year and was joined by three fellow Seniors and the league’s top Sophomore as All League distinction.

“It’s awesome to be recognized, there were a lot of great players in our division,” said Fanelli. “But it feels great to know my hard work paid off.”

Fanelli was second team member a year ago and knowing with Schermerhorn’s graduation would assume a larger role for the Eagles.

“We really worked on my shot from the outside and worked to get stronger physically,” said Fanelli.

Mountain View Coach Joe Gibbons was estatic for Fanelli felt he’s made a great transition throughout his career.

“To see how far he’s come, from this 5-11 skinny kid, who could do some things, to becoming a strong 6-3 player who could led us a variety of ways,” said Gibbons.

“We knew his role would grow this year,” explained Gibbons. “So, we tweaked a couple things with his shot and worked on his range. I think he shot 31 or 32 percent from the three-point line.”

Marshall, who as a Junior scored a mere seven points emerged as the league’s preeminent post player averaging 14.5 ppg and 12 rebounds. 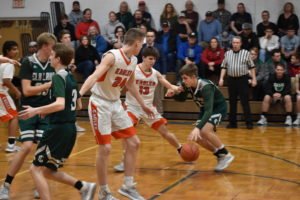 Elk Lake’s Matt Mowry (23) attempts to drive to the basket against Elk Lake earlier this season. Mowry was selected to the LIAA first team all stars by Division IV coaches. Photo by Sue Gesford

Mowry who after breaking into the Warrior rotation as a Freshman thrived with a larger role teaming with Marshall to also average 14.5 points while scoring from a variety of ways including 28 three-point goals as the duo led Elk Lake to a fourth-place finish in the division and a near upset of Old Forge in the first round of the District II playoffs.

“Playing with Brant was good, he gave us a big presence and took a lot of pressure off the rest of us,” said Mowry.

While the honor was the capstone achievement of their careers of the four Seniors, Mowry will be around to torment league opponents. rest of the first team

“He’s a really good player and going to be a problem for all of us the next couple years,” lamented Gibbons.

Gibbons felt Mowry’s offensive tenacity is something that separated him from other players in the league.

“People talk about players playing hard defensively, he plays hard offensively” explained Gibbons. “He plays with an intensity on the offensive end that you rarely see.”

Helbing lead the division in scoring at 16.4 points per game and free throw percentage among players who attempted at least 20 free throws. Berrios averaged 11.8 point per game while leading the league with 1.8 three-point field goals.

In a poll conducted by NEPA Basketball Blue Ridge Senior Gavin Rosa joined the five as a Division IV first team representative. The Raider Senior averaged 13.5 points during the season.

In NEPA Basketball’s poll Bleck, Baker, and  Watkins were joined by Susquehanna’s Jakub Tomczyk on the second team and Susquehanna Coach Lawrence Tompkins was selected Coach of the Year.

Be the first to comment on "Fanelli named Div IV Player of the Year: EL duo Marshall and Mowry also tabbed"