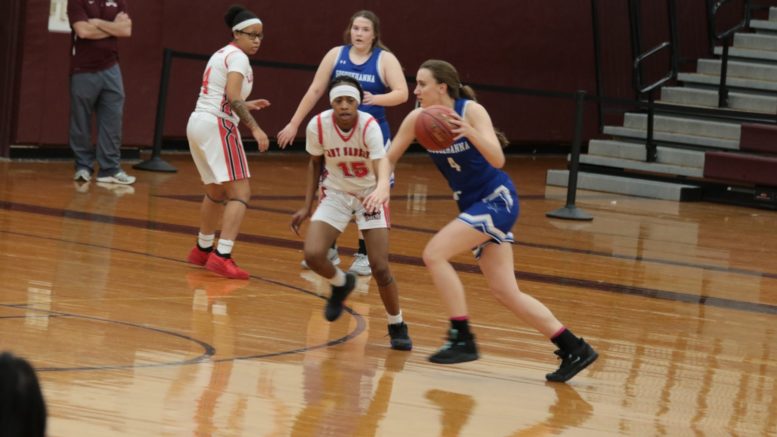 Susquehanna's Mackenzie Steele (4) starts a drive to the basket during the Lady Sabers' game versus Chester Charter. Susquehanna's first round of the PIAA playoffs. Steele was recently named Player of the Year for the LIAA Division IV.

Another year, a different Lady Saber. 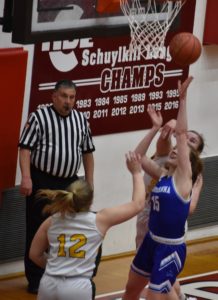 Susquehanna’s Taylor Huyck (15) takes the ball to the basket against Nativity BVM during the Lady Sabers’ game in the District II/XI Subregional Championship. Huyck was named to her third straight LIAA Divison IV first team. Photo by Jackson Gesford

League Division IV coaches when she was named Player of the Year in a poll conducted by the Scranton Times Tribune newspaper.

The 6-1 Steele averaged 13.5 points per game, 8.7 rebounds and 2.1 blocked shots in league play while leading Susquehanna to their third-straight LIAA Division IV title, a District II Class A championship, and the District II/XI Subregional final, and the PIAA state quarterfinals.

“I woke up to a ton of texts from my family, before I could even read about it,” laughed Steele. “But it’s just a great honor to receive, and I’m thankful to be recognized.”

A first-team selection a year ago and a presence on the defensive end for three seasons Steele looked to take her offensive game to a new level during the offseason.

“I got a lot more confident offensively, worked on a few more moves,” explained Steele. “I’ve always been confident defensively, but I needed to be on the other end as well.”

One of the people Steele credited for her development was her AAU Coach the late John Bucci.

“I worked out a lot with Coach Bucci, and the other coaches at Backcourt Hoops, to get better offensively,” said Steele. “We worked on positioning and feeling where the defense was.”

It was also the versatility of her offensive game that impressed Susquehanna Coach Kirk Fallon.

“We were able to use her a variety of ways,” said Fallon. “She’s tough inside, but also has a nice mid-range jumper, and we were even able to use her at the point to try and mix things up.”

Huyck led Division IV in scoring at 15.2 points per game, free throw percentage .756 (15 or more attempts), and second in three-pointers per game at 1.9.

That versatility was something that Fallon valued from Huyck.

“She was very good at everything I asked her to do this season,” explained Fallon. “We ask her to play 32 minutes, guard the other team’s best perimeter player, and be the point guard at times. And she’s done all that at an all-star level.”

Zajaczkowski was Elk Lake’s leading rebounder XX and second-leading scorer at 10.5ppg while leading the Lady Warriors to a third-place finish in Division IV and the second round of the District II Class 2A playoffs.

“She gave us trouble for two years,” quipped Fallon. “Sometimes she gets overlooked with all the guards they have.”

Snyder and Pompey were part of a Montrose unit that by the end of the year was starting two freshman and two sophomores, and a junior.

“I was very surprised (by the selection),” said Snyder. “Transitioning to the varsity level from Junior High is quite a change.”

Snyder credited her fellow teammates and coaches for adapting to the next level.

“My teammates really supported me, and our coaches do a great job of pushing us and making us better,” Snyder added.

Receiving the honor in their inaugural varsity season only fuels the drive to get better according to Snyder and Pompey.

“I think it encourages me more,” said Pompey. “I don’t want to rest and want to keep pushing to get better for the next year.”

Be the first to comment on "Steele headlines girls’ Division IV all stars; Huyck, Zajaczkowski, and Montrose pair also honored"