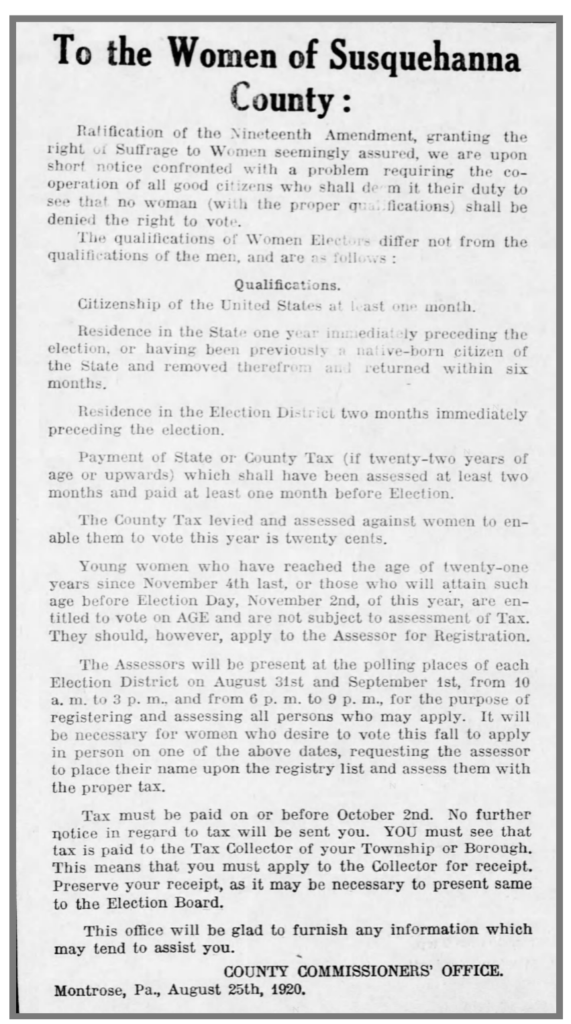 Women gained the right to vote 100 years ago, as Tennessee ratified the 19th Amendment on Aug. 18, 1920. That ratification fulfilled the two-thirds requirement to make it law. Eight days later, the U.S. Constitution was formally modified to reflect the law. This Aug. 25, 1920 announcement from the Susquehanna County Commissioners appeared in the Montrose Democrat and defines the times and places where women could register to vote. It also notes that the newly registered voters would be subject to a 20-cent poll tax in order to be eligible to cast a ballot. (20 cents is equal to about $2.59 in today’s dollars).

August 18, 1920. On that day, the Tennessee legislature became the 36th state to ratify the 19 Amendment, fulfilling the two-thirds requirement of state approval for the women’s right to vote to become law.

The Women’s Suffrage Movement began in the 1800s with women organizing, petitioning, and protesting in efforts to achieve the right to vote. The amendment was first introduced in Congress in 1878 and finally passed the U.S. House of Representatives on May 21, 1919, followed by the passage by the U.S. Senate just two weeks later. To officially become a constitutional amendment, ratification was needed by 36 of the 48 states.

On June 24, 1919 Pennsylvania was the seventh state to ratify the amendment, behind Wisconsin, Illinois, Michigan, Kansas, New York and Ohio. The amendment reads: “The right of citizens of the United States to vote shall not be denied or abridged by the United States or by any state on account of sex.”

The vote in Tennessee was tied, 48-48, when Harry T. Burn – as a young member in his first term in the Tennessee General Assembly – cast the deciding vote. Burn originally intended to vote for the amendment but began to side with Anti-Suffragists at pressure from his party leaders and, according to reports, misleading telegrams from constituents.

But Burns also received a letter from his mother urging him to vote in favor of ratification. He entered a personal statement to the House Journal: “I knew that a mother’s advice is always safest for a boy to follow, and my mother wanted me to vote for ratification.”

The Aug. 25, 1920 edition of the Montrose Democrat contained an announcement from the county commissioners (see photo), which outlined the days, times and locations where women could register to vote in Susquehanna County.

The announcement also noted a poll tax of 20 cents that had to be paid by women in order to actually participate in the election (and required a receipt of payment shown on election day at the polling place).

Some Susquehanna County women shared the year they cast their first presidential ballot, and who they voted for in that election.

In 1968, Judy Dennis voted for Richard Nixon and says she has voted every year since then. Robin Armstrong’s first presidential election was 1972, with a vote for George McGovern. Mary Ellen McCarey also voted McGovern in 1972 – when the voting age lowered to 18 from 21.

Several women reported first votes for Ronald Reagan – in both 1980 and 1984; and another cast her first ballot for John Kerry in 2004.

Be the first to comment on "100th Anniversary: 19th Amendment becomes law"