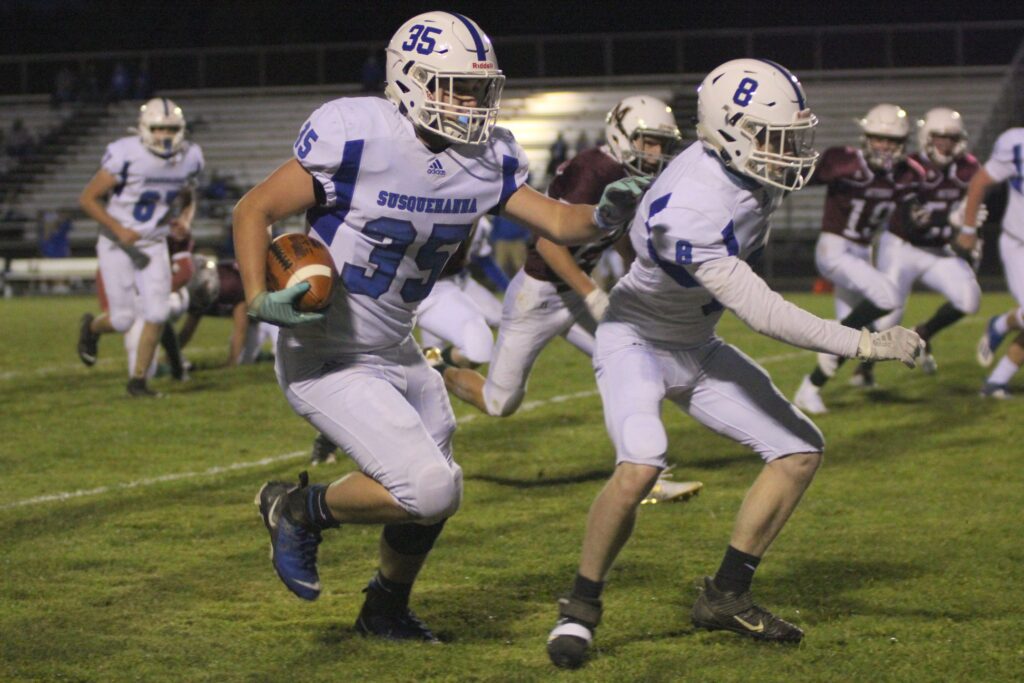 Susquehanna’s Calvin Sheideler (35) makes his way up the field, aided by Cole Soden (8) in Saturday’s Battle for the Bluestone which saw the Sabers take the win over Montrose, 51-0. Sheideler rushed for 162 yards, scored three touchdowns, and added an interception, and earned the Tom E. Robinson Memorial Award. PHOTO BY JESSIE BLANEY 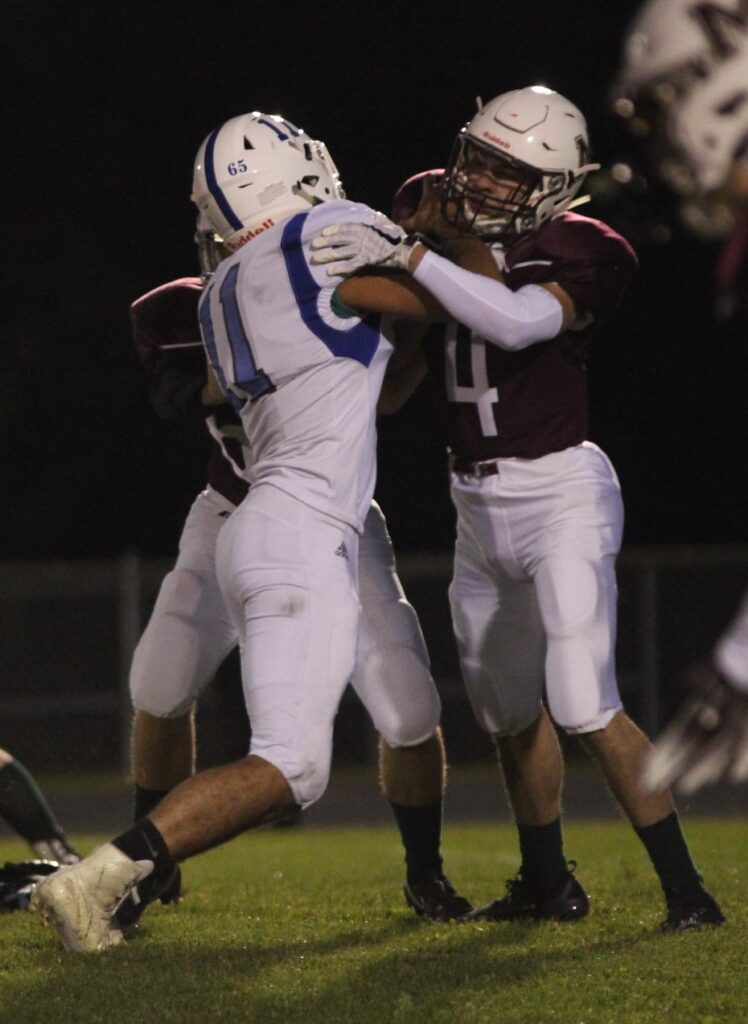 What normally would have been a midseason clash between archrivals turned out to be the dawning of a new season and the start of new era.

Susquehanna and Montrose stepped under the Saturday night lights for the first game of the COVID-delayed 2020 high school football season. Saber Calvin Scheideler made quick work of spoiling the debut of Montrose under the direction of first-year coach Kerry Patton.

Scheideler followed the blocks of the Susquehanna line to rip off runs of 24, 22, and 45 yards as the Sabers scored 35 unanswered points in the opening quarter.

“It all starts with the line,” said Scheideler. “Our blocking schemes worked and there were just so many holes created.”

Susquehanna Coach Kyle Cook also credited his senior Quarterback Garrett Decker for creating the opportunities for Scheideler. “We didn’t have any film on them because they hadn’t scrimmaged,” explained Cook. “But Garrett audibled a ton, recognizing at the line of scrimmage what would work.”

Decker added a one-yard dive into the endzone after Scheiderler’s first two touchdowns and finished with 20 yards on three carries.

“It’s really big that coach has the confidence in me to be able to do it (audible), and decide what will work best at the time,” said Decker.

For Cook, it’s a not a very big decision to have that confidence in his quarterback. “Garrett’s one of the most intelligent football players we’ve had since I’ve been coaching, on both sides of the ball,” stated Cook. “He started as a freshman, primarily on defense, and has grown and soaked in a lot of knowledge in that time.”

Layne Fisk also added to the Sabers’ scoring onslaught. Fisk recovered a Meteor fumble in the endzone with just over a minute left in the first quarter and tacked on the extra point to give the Sabers a 35-0 advantage.

Fisk then opened the scoring in the second quarter. After Scheideler stymied a Montrose drive with an interception, Fisk got free and scampered 83 yards for a touchdown and caught his breath enough to add on the extra point. 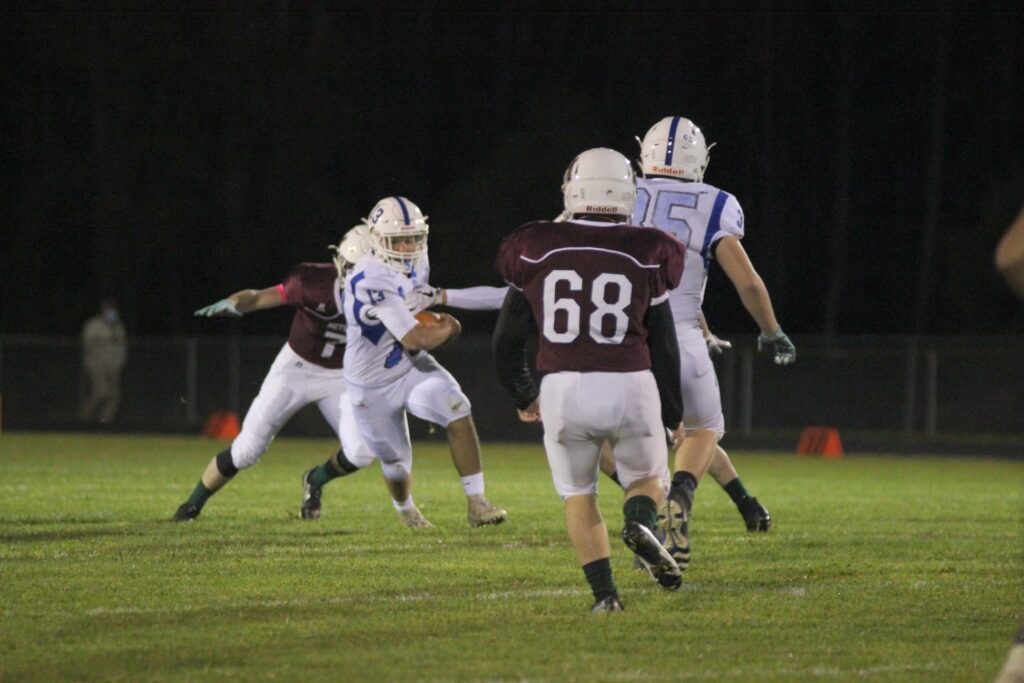 Susquehanna QB Garrett Decker added a touchdown to the score and finished with 20 yards in three carries on the night. PHOTO BY JESSIE BLANEY

Susquehanna finished off its scoring with a safety when they sacked Montrose Quarterback Gus Brown in the endzone.  Kaleb Shimer added an eight-yard scoring run in the final minute of the half to give Susquehanna a 51-0 lead at intermission.

Scheideler finished with 162 yards rushing to go along with his three touchdowns and the interception to earn the game’s Tom E. Robinson Memorial Most Valuable Player award.

But just as important as the win for the players, it was the chance to finally get the season underway that made the night special.

“We’ve been at it for four weeks and we’re sick of going against one another,” said Cook of team practices. “It’s just nice to go up against another jersey.”

If there is a positive to the opening delay due to the coronavirus pandemic, it’s the seriousness that the players have brought to the season, explained Cook. “The kids want it more, there’s a better energy to our practices, and fewer issues,” he said. “I think the guys appreciate every minute we are able to get on the field more.”

Decker concurred with his coach and said there might have been a few more emotions going into the game.

“There were a lot of nerves, we weren’t sure we’d ever get to play,” noted Decker. “But when kickoff happened it was just football.”

Montrose Coach Kerry Patton agreed with Decker and Coach Cook. “Getting on the field was everything, you got to take small victories, and the fact that we had kids on the field playing a game they love is a win in itself,” said Patton.

With a new coaching staff and the implementation of new players and system Montrose has probably been hurt as much as any program in the area by the pandemic.

“Probably half our kids have never played football before and the half that has this was their first experience at the high school level,” added Patton. “We had a week of spring conditioning before everything was shut down.” 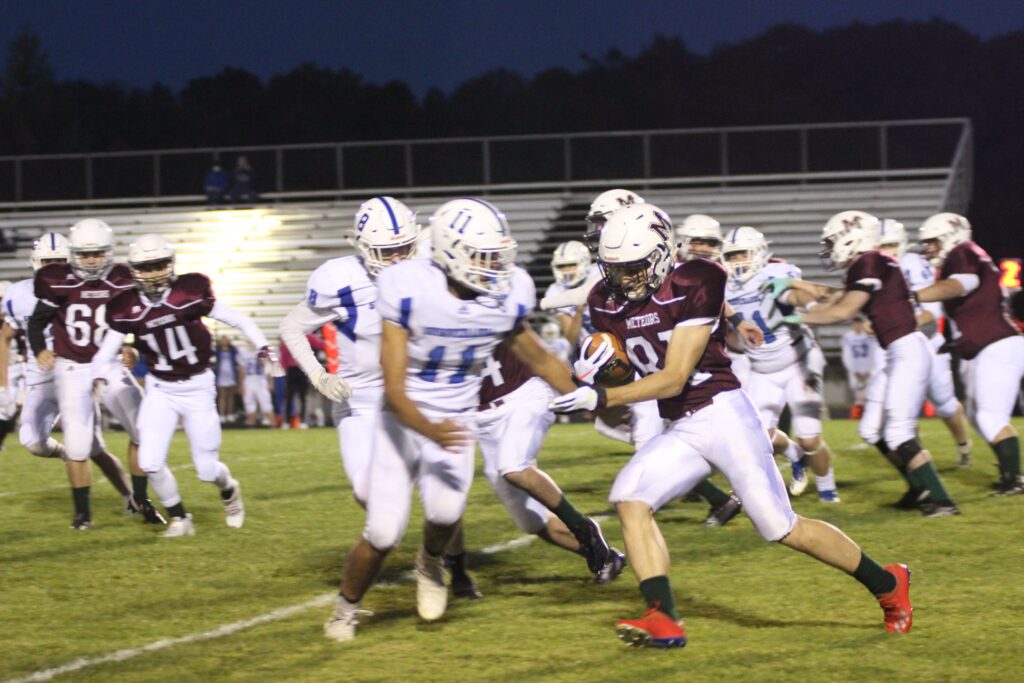 However, Patton was pleased with what he saw out of his team and their attitude despite the early deficit.

“It’s a tough spot for our seniors, but they’ve shown exceptional leadership and demonstrated a positive attitude in leading the underclassmen,” said Patton.

Patton was especially pleased with Brown, a sophomore, at quarterback.

“I told him at halftime that this is his team and gave him responsibility to recognize formations and make decisions at the line of scrimmage,” added Patton.

Patton also commended the sportsmanship shown by Cook and his staff, as Susquehanna rested many of their starters during the second half.

“He (Cook) gave us an opportunity to see ourselves and show our younger players what they need to do in situations,” said Patton. “We’re rivals but we are both trying to accomplish the same goal and use the sport of football to teach our players life lessons.”