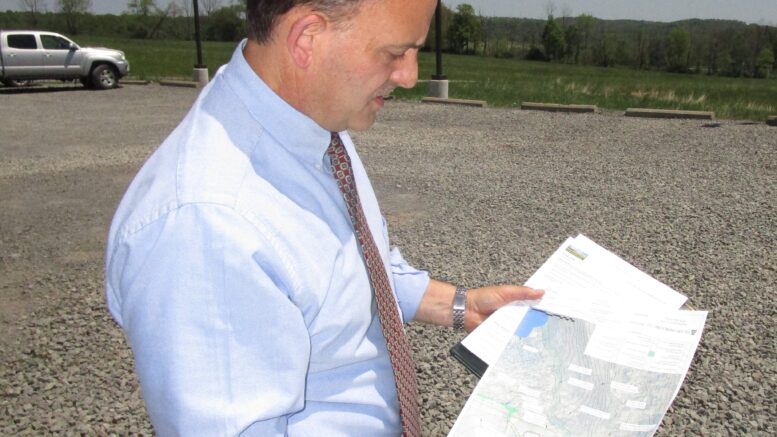 Elk Lake superintendent Ken Cuomo reviews plans for the eventual construction of a paved walking trail on the campus that will compliment a major wetland mitigation project and provide Dimock Township residents with their first public park. 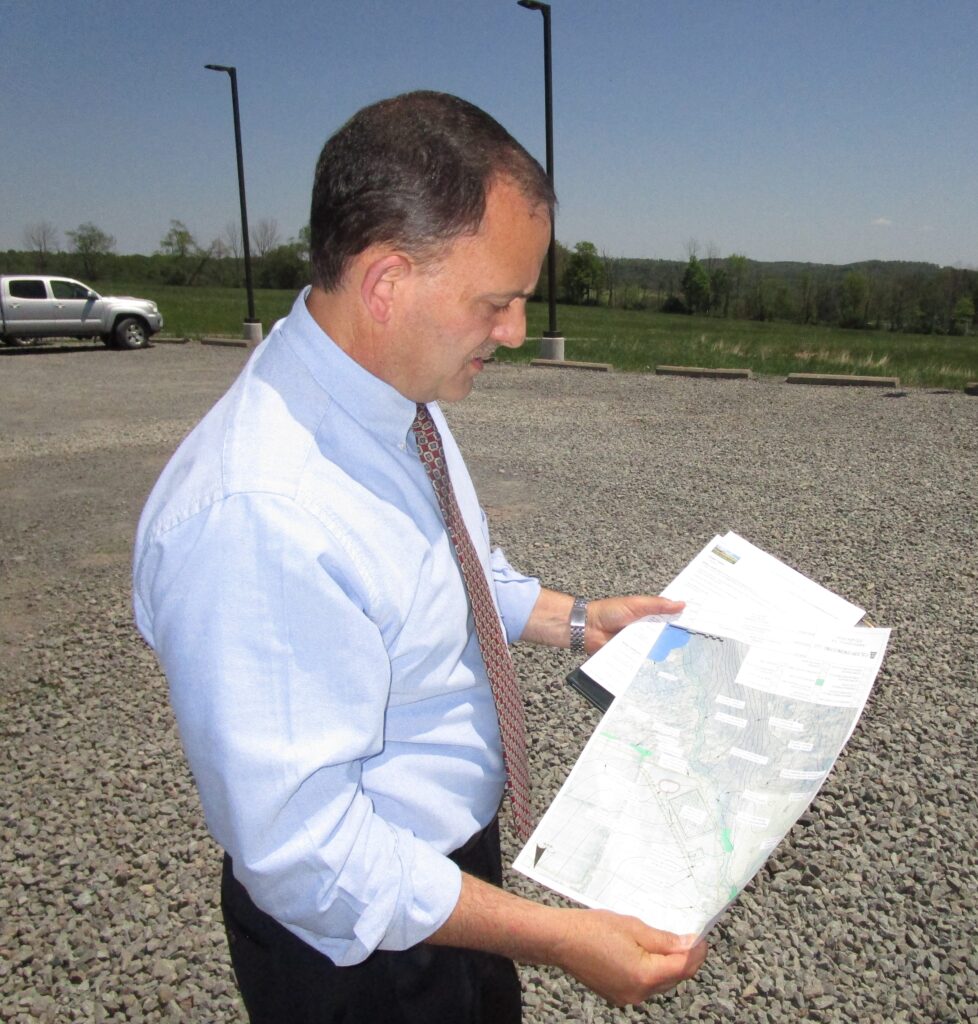 Elk Lake superintendent Ken Cuomo reviews plans for the eventual construction of a paved walking trail on the campus that will compliment a major wetland mitigation project and provide Dimock Township residents with their first public park.

Dimock Township is lush with forests, farmlands and waterways but, according to a report by the PA Department of Conservation and Natural Resources (DCNR), this portion of Susquehanna County is a high-need area when it comes to public trails. At the same time, mitigating the effects of land use of the Elk Lake campus on the water that naturally pools on the hilltop also became a necessity.

According to Elk Lake Superintendent Ken Cuomo, residents near the campus began expressing concerns about storm runoff when construction for the CDL Training Center was planned. The school district brought in environmental consultant Rebecca Peterson, owner of Folsom Engineering, to address erosion issues and devise a plan to stabilize the wetland. The end results will not only fix the problems but increase amenities for both students and local residents.

“The solutions are multifaceted and will result in environmental educational opportunities and an ADA-compliant walking trail for the community,” Cuomo explained.

The final phase of the estimated $300,000 project will include the development of a one-mile, paved walkway. Thanks to grants funneled through Dimock Township from several state representatives and a DCNR match, $143,500 has been committed so far toward a wetland mitigation project at the south end of the Elk Lake campus.

In the years before agencies like the Department of Environmental Protection (DEP) started raising awareness of the importance of wetland preservation to the overall ecosystem, it was not uncommon for water to be diverted as a matter of convenience during construction. Like many other building sites modified over time, land on the Elk Lake campus was raised and paved, and storm runoff was channeled to a culvert below the elementary school, where it found its way across a field toward the tree line.

“It wasn’t very natural,” Peterson said of the resulting swamp. “We could see where the water wanted to run, and we wanted to restore it to more of a head-water stream.” The marshy area is difficult to distinguish from the air or ground, but it actually forms the head waters of a stream that leads to nearby Broadhead Pond and on to White Creek.

Fortunately, existing infrastructure and the addition of the CDL school with its access road and paved driving range could be incorporated into the new plans. The tree line that marks the approximate property line between the school and adjacent residences and farms was also the likely the barrier to the old stream bed, Cuomo noted. At the lower end of the property, the stream will be diverted with a rip-rap apron to connect the old channel with the new main.

Upstream- in the area from the elementary school down around the CDL Center – the water needs to be slowed down a bit. “Our plan is to get that section back into a natural stream channel with ripples and pools and better habitat,” Peterson explained.

The mitigation elements will also address concerns about the estimated 185 pounds of phosphorous, 204 pounds of total nitrogen, and 337 pounds of general sediment released via the waterway each year.

The remedy for that is what gets Cuomo and his teaching staff particularly excited.

With the study completed and approved, the earth moving will begin shortly. As the streambed becomes re-established, Peterson will work with the school to define where and what should be planted to create a riparian buffer that not only holds the new banks in place but naturally removes potential toxins from the water.

At that point, the site will become an outdoor classroom where students can get hands-on lessons in biology and environmental issues. They will help to install signage to provide future students and the public better information about what has been planted and why it is so important to protect and preserve this vital component of the Upper Susquehanna/Tunkhannock Watershed.

“They will be involved once the construction part is done to identify tree markers, trail length markers and any other educational documentation,” Cuomo related. In subsequent years, students will be able to take water samples to test its properties and keep track of its ongoing effects on wildlife.

Construction of the trail is still some years away and is contingent on further grants and potential financial support from the community and businesses operating in the area. The trailhead, Cuomo noted, is already established with the pavilion and portable restroom facilities near the elementary playground. The project also has the backing of elected officials like Sen. Gene Yaw, Sen. Lisa Baker and Rep. Tina Pickett, all of whom worked to secure the most recent $95,000 grant through DCNR’s Greenways, Trails and Recreation Program.

“When I heard about this project early on, I knew that it was something we could support,” said Sen. Yaw, who is also a Vice Chair of the Chesapeake Bay Commission. “Just like we take care of roads, we need to efficiently manage and take care of our streams and other tributaries.”

“I am pleased that the stream project is moving forward and was happy to advocate for funding approval,” Rep. Pickett stated. “While this project will result in a cleaner waterway, students will participate in the monitoring and maintenance plan through their ecology and biology classes, creating a win-win situation.”

“It’s the perfect spot for it,” Peterson said of the Elk Lake campus. “I think, in a lot of ways, it’s a hub for the community. It has things that other rural communities don’t have.”