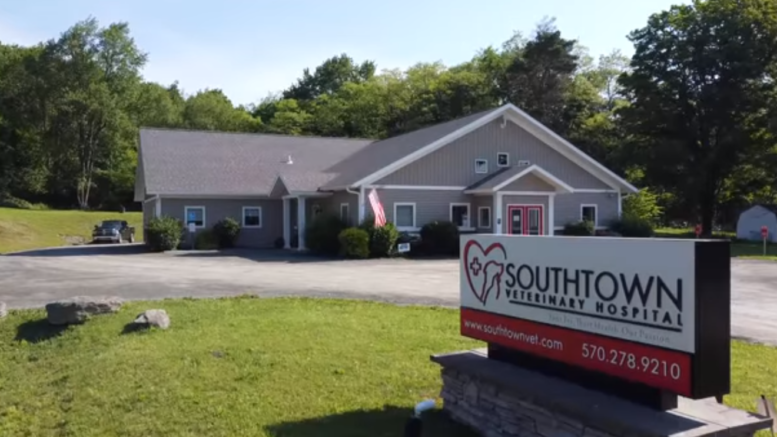 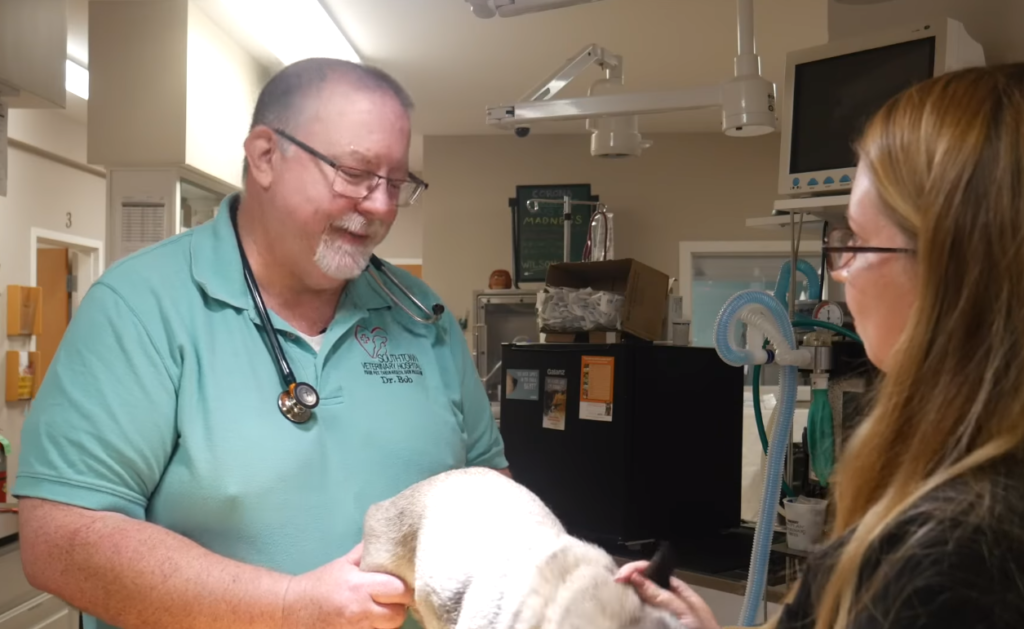 It won’t be long before Southtown Veterinary Hospital opens its doors to the public for the first time in about 15 months. The facility has operated with curbside and drop off appointment as part of their COVID mitigation efforts.

The move back to more normal operations on Tuesday, July 6, needed an announcement. Office manager Rebecca Sullivan had the idea to create a video, so she turned to Ed Luecke and Michael Whitbeck of LORE Marketing and Media for help.

“We’ve gotten used to speaking louder and playing music,” Rebecca said, “We all have to go back to our ‘inside voices.’” She was inspired by a video that used the concept of a “swear jar.”

But the LORE team came up with a more creative concept. “We wanted something original, something with a little more substance to it,” Luecke said.

The end result, “The Curse of Dr. Bob,” has (as of press time) received over 742,000 views on the Southtown Veterinary Hospital’s Facebook page.

In the video, “Dr. Bob” is challenged by his staff to bring his swearing under control before the veterinary center reopens to the public.

Luecke said people saw their friends and themselves in it. “It just spoke to people at this time.”

Rebecca said, “If anything, we were just hopeful the people that like our Facebook page would get a good laugh. It’s really something.”

Luecke said, “We knew it had universal appeal with what’s been going on. It’s engaged so many people – not just locally, but around the world.”

Comments came flooding in to the post: “Thank you for bringing joy to our very burnt out lives. Laughed so hard I cried,” wrote a veterinarian named Carolyn.

Dr. Sullivan, aka “Dr. Bob,” said he’s been absolutely amazed at the response the video has garnered. “The most rewarding thing is the compliments and comments from fellow veterinarians,” he said. “All veterinarians have had a pretty rough year.”

On the video’s internet popularity, Dr. Sullivan said, “I believe it is timing. People were in need of something hysterical.”

And what makes the video even funnier, is the irony that Dr. Sullivan actually doesn’t swear.

Luecke and Whitbeck have used humorous sketch-style videos for years as marketing tools for their insurance business. They decided to take that idea to the next level and launched LORE. Businesses can use a video as a marketing tool and/or a team-building exercise.

He said Dr. Sullivan, Rebecca and the staff were easy to work with and that shows in the final product.

The video was shot on a weekend when the veterinary center was closed.

“We do it in individual shots,” Luecke said. As the director, he walked the staff through the script, “one line at a time,” and coaxing out the style and performance he was looking to achieve. “They were improving as the day went on,” Luecke said. “Basically, I told them at the beginning they were not going to be acting but playing (themselves).”

“It’s interesting how 8-10 hours is perfectly edited into four minutes,” said Rebecca. “Ed and Mike did the magic that made it happen.”

For their first effort, LORE Marketing and Media is also gaining more attention. “Not as much as Southtown Vet,” Leucke said. “But we’re doing our job by putting them out front.”

Dr. Sullivan never expected their video to go viral. “For it to happen for our little practice in South Montrose,” he said in wonder. He would love to see it hit one million views but would be dumbfounded if that happens. “I was just ‘me’ in the whole thing,” he said.

As the Southtown Veterinary Hospital prepares to open to the public next Tuesday, the office will still be offering curbside and drop-off appointments for pet parents who want to continue using that service.

If you haven’t watched “The Curse of Dr. Bob,” visit the Southtown Veterinary Hospital page on Facebook to view it. https://www.facebook.com/SouthtownVetHospital/videos/312156013784128

For more information about LORE Marketing and Media, you can find them on Facebook.