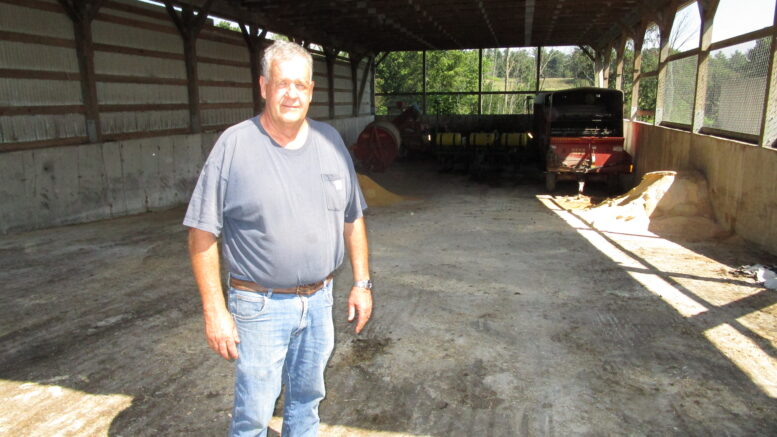 Shamrock Farms owner/operator Ed Kelley’s “paint-tray” manure storage facility is all but empty in the summer months, which affords him some extra room for his farm equipment. 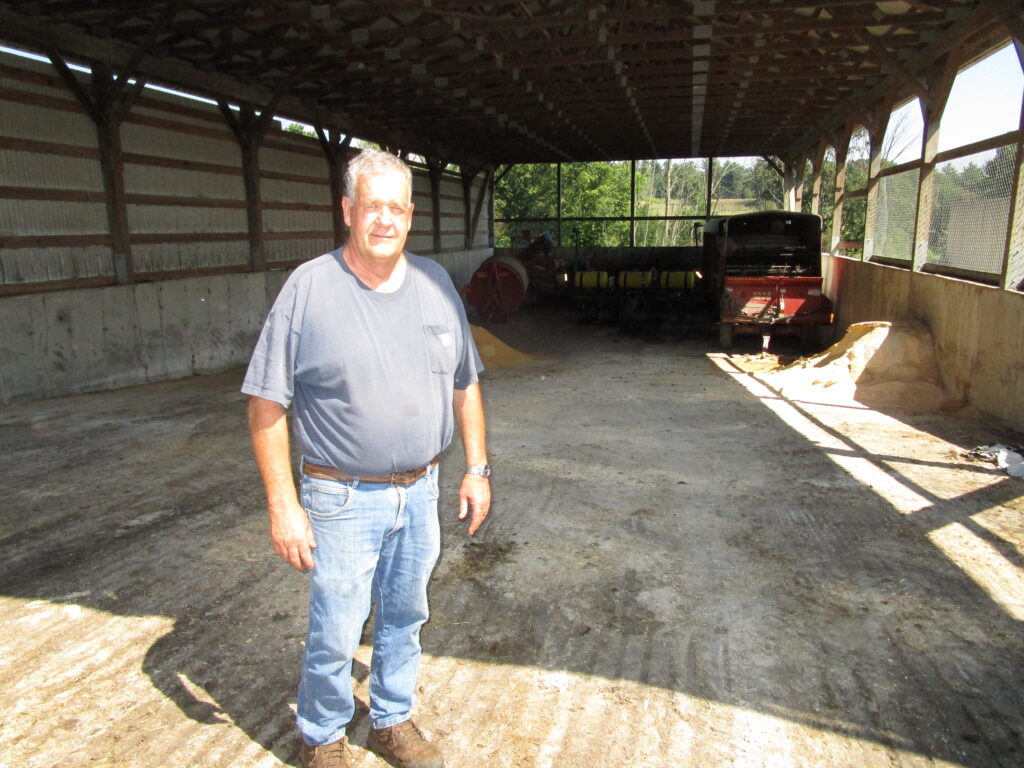 Shamrock Farms owner/operator Ed Kelley’s “paint-tray” manure storage facility is all but empty in the summer months, which affords him some extra room for his farm equipment.

Local farmers had an opportunity last week to share details about their varying operations and talk to elected officials about the unique challenges they face. Three farms were highlighted on Aug. 24 during a Legislative Farm Tour coordinated and sponsored by the Susquehanna County Farm Bureau (SCFB). Nearly 30 local ag producers participated in the day’s event.

Featured sites included LaRue’s Produce and Shamrock Farms near Lawton and Russell Farms in Silver Lake Township. Topics varied from soil nutrient management and pest control to the effects of weather and an increasing deer population on crops. Deer, in fact, were deemed “enemy number one” by the owners of each venue visited.

LaRue’s Produce along Route 706 between Lawton and Montrose is a multifaceted operation seven generations in the making. Dennis and Victoria LaRue raise beef cattle on the farm, while their son, Ben LaRue, and his wife, Renee, concentrate on produce. Combined, they grow 30 acres of silage corn, 12 acres of prized sweet corn, 12 acres of vegetables, 100 acres of hay and a variety of fruits.

SCFB vice president Jim Barbour welcomed tour members at the first stop on the steamy Tuesday morning, before turning over the talk to Ben and Renee LaRue.

The LaRues have been using tunnels – arched temporary greenhouses – since 2004 to extend their growing season for tomatoes and peppers and upgraded to higher tunnels in 2016. According to Ben, the tunnels give them a four-week head start in the spring and afford them an extra three to four weeks of cover into the fall.

In addition to providing warmth earlier in the season, the tunnels and a drip irrigation system help the LaRue’s manage the effects of moisture on the crops. “There’s less disease with the tunnels because we can keep the leaves dry,” Ben explained.

They start growing flowers and other vegetables in the fields for their roadside produce stand in the spring, as well as corn. Ben and Renee joke that their target date for picking is always July Fourth, and they came the closest this year with their first picking on July 8. “The seeds may say 60-day corn, but it’s still a 90-day crop,” Ben remarked.

The stand is currently brimming with tomatoes, green beans, zucchini, cantaloupes, and peaches, and sweet corn is still a hot commodity. Renee said that pre-ordered corn for freezing should be available well into September as the operation transitions from corn to pumpkins, winter squash, and mums.

Also popular in the produce stand is beef raised on the farm, which is available as steaks and ground meat or a pre-ordered half steer. About half of the beef cattle Dennis raises on the farm is marketed through the farm stand.

“There’s been a big uptick in that,” Renee said of beef sales. “People want to know where their food is coming from.” The remaining 50 percent of the cows go to Cargill for processing, from which the meat is sold to regional grocery chains.

The LaRues also put a lot of time and effort into soil health. “Plants are a lot like people,” Ben said. “If they have all the nutrients they need, they won’t get sick.”

Just one flash flood however, which he noted has been more frequent in recent years, can take all of the fertilized topsoil downstream in one day.

Nutrients in the form of cow and chicken manure are mainstays for crop production at Shamrock Farms along Irish Hill Road north of Lawton.

Owner operator Ed Kelley stores manure from more than 500 beef cattle in a unique paint tray shaped, roofed manure storage facility that gently slopes from zero to six feet deep. Units like Kelley’s have been perfected by trial and error over the years by fellow farmer and longtime SCFB environmental coordinator John Benscoter, who provided tourgoers with details of its construction.

The storage facility is filled nearly to capacity by the beginning of spring, when Kelley starts spreading it on his hay and silage corn fields.

As the basin is emptied and cleaned, Kelley starts receiving shipments of dried, pulverized chicken manure from Lancaster County. It doesn’t require as much room to store, so the storage facility doubles during summer months as a convenient parking area for farm equipment.

Nearby, about 50 head of cattle, weighing between 1,200 and 1,400 pounds each, were milling about in a relatively new structure awaiting transport to Vermont for slaughtering. Kelley’s cattle are considered “select,” which is one grade lower than “choice” and preferred by restaurants. Once they are pulled from the pastures, their diet is restricted to grain and silage until they are ready for transport.

“The beef market has very stringent guidelines in regards to hanging weight, fat content, and no antibiotics,” Benscoter explained.

Aiding in animal health and enhancing the cleanliness of overall operations is an increase in heavy use area protection (HUAP). Almost all the new barns and work pads have concrete floors, which Benscoter related, will last forever if installed correctly.

Benscoter also spoke of the conversion of dairy farms to beef cattle production, noting that old dairy barns often don’t allow for easy access by skid-steers, which are an essential part of beef operations.

After lunch at the Rush Community Center, where SCFB representatives offered brief presentations and elected officials shared some remarks, the entourage headed to Russell Farms.

Formerly known as Russell Orchards, the venue is home to one of three retail stores, a packing house, 30 acres of apple trees, and acre and a half of blueberries and raspberries, 30 acres of pumpkins and 100 acres of hay.

Owner Mike Russell Sr., who manages the operation with his wife, Debbie, and sons, Mike Jr. and George,  spoke of a production season that begins with pruning apple trees and blueberry bushes in mid-march and wraps up with long days of harvesting fruit and pumpkins well into the fall.

New technologies and soil conservation projects have helped the Russell family increase yield and stave off diseases. “One thing that people don’t realize about an orchard is how much subsurface draining it takes to make it work,” John Benscoter told those in attendance. Russell thanked Benscoter for his guidance in the installation as well of a spray irrigation system that prevents frost kill.

Like the LaRues, the Russells noted that the pandemic has been good for businesses like theirs as people shop closer to home and are relearning the value of locally sourced foods.

Tourgoers were shown how the apple cider is made and were also encouraged to pick an apple from the orchard to eat.

Mary Ann Hawley, one of local farmers on the tour, runs a beef cattle operation in Forest Lake with her daughter Virginia and son-in-law Brian. In 1985, they were among some of the earliest farmers in Susquehanna County to make the switch from dairy to beef. “Dairy wasn’t profitable. We knew we couldn’t keep it going,” she explained.

She took part in the Farm Bureau’s tour to learn what fellow beef farmers are doing. By the end of the day, she was impressed at the variety of options for farmers. “There are so many opportunities in agriculture, we need more people to know about it,” Hawley remarked.

“Our aim was to help educate our tour attendees with the different types of farming, how farming techniques are changing, and the growing need for continued funding, which helps the farmers to install and implement good conservation practices that will aid in protecting the environment,” Benscoter stated. “Farming is not dead in Susquehanna County. It is just changing and evolving for the present times.”

For more information about the Susquehanna County Farm Bureau, follow the organization on Facebook or send an email to Benscoter at johnrbenscoter@yahoo.com.