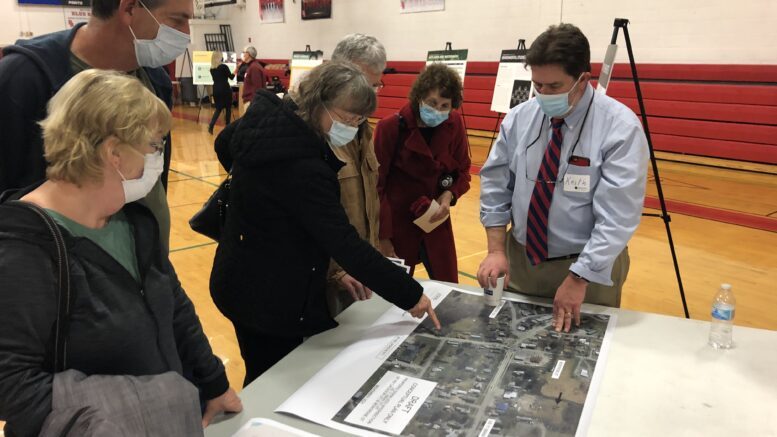 Residents review plans to add turning lanes and a traffic signal at the intersection of Routes 11 and 492. STAFF PHOTO/STACI WILSON

Residents review plans to add turning lanes and a traffic signal at the intersection of Routes 11 and 492. STAFF PHOTO/STACI WILSON 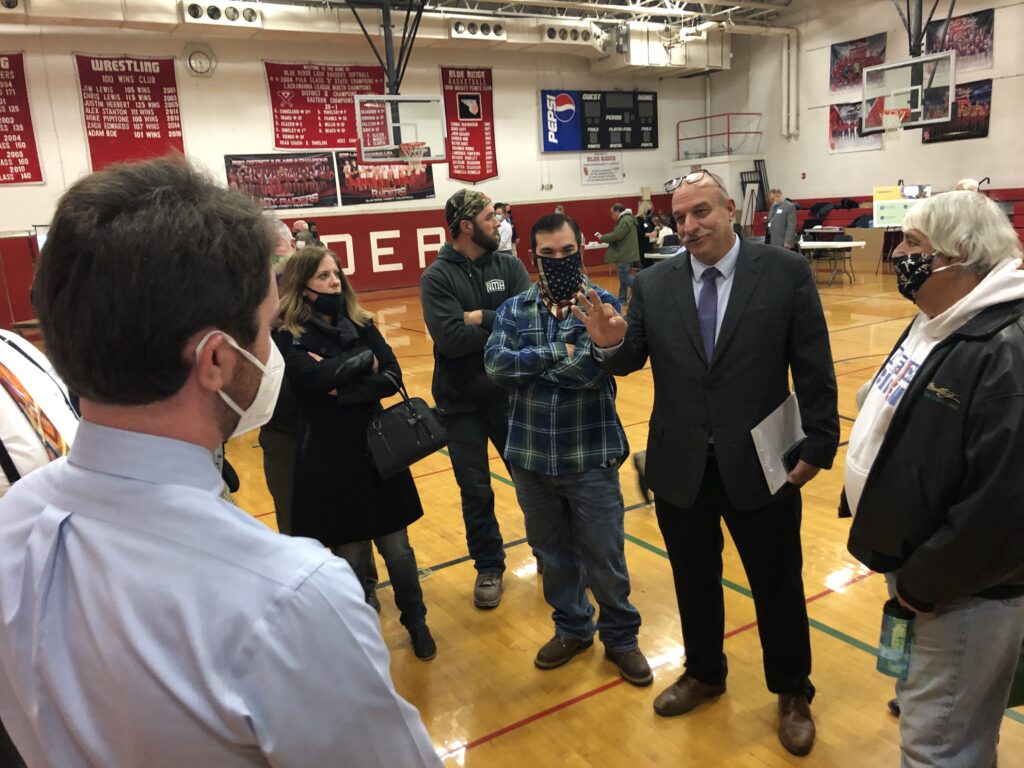 Commissioners Judy Herschel and Alan Hall, along with local residents, questioned PennDOT officials about the proposed tolling and impacts of the I-81 bridge over the Susquehanna River in Great Bend Twp. STAFF PHOTO/STACI WILSON

PennDOT’s open house on the proposed tolling of a Interstate 81 bridge in Great Bend Township did little to assuage concerns of residents and elected officials who attended the Monday event held at the Blue Ridge High School in New Milford.

The purpose of the open house for the I-81 Susquehanna Project was for the state’s Department of Transportation to provide information, answer questions and solicit comments on the project being a candidate for bridge tolling through the PennDOT Pathways Major Bridge Public-Private Partnership Initiative. The I-81 bridge over the Susquehanna River is one of nine bridges in the state being considered for tolling. Under the initiative, tolls collected would be used for the bridges’ construction, maintenance and operation.

The I-81 Susquehanna Project is a nine-mile stretch of reconstruction and repair work along Interstate 81 from New Milford Borough to the New York border. In addition to the full repaving and replacement of guide rail and barrier systems, signage and drainage network, the work includes the replacement of one overpass structure, four dual bridges over local creeks, roads and a railroad, as well as the main dual bridge over the Susquehanna River between Hallstead Borough and Great Bend Borough, which were built in 1961 and rehabilitated in 1979, 1993 and 2006.

The toll would be in place for the 30 year length of the contract, according to PennDOT.

With project displays set up around the gymnasium, PennDOT representatives faced a barrage of questions from those in attendance.

“How can we trust you to handle this project?” questioned one person.

“How can we trust the money will stay here?” asked Commissioner Judith Herschel, with Commissioner Alan Hall noting the Pennsylvania Turnpike lost $110 million in revenue from uncollected tolls.

The response to Hall on the lost tolls was that amounted to only one percent of turnpike revenue that was lost.

Herschel said the tolling of the bridge will “have an economic impact on (Susquehanna County.” She said the county is often “left on the back burner and we’re just sick of it.”

“It’s bad public policy as far as I am concerned,” Baker said. “The governor failed to take into account public input before proposing a toll on nine bridges.” She also noted that eight of the nine bridges were located in Republican-held state senatorial districts.

Baker said she was deeply concerned about the cost of tolling over the 30 years of the project on local shippers. She related that one small shipping company estimates they would pay $250,000 in tolls and added that she was not in support of the toll initiative.

Baker said, “We continue to frequently hear about is the condition of local roads and bridges, where maintenance always seems to have lagged or been insufficient.  No matter how much state money is committed or available, it is not distributed equitably, which is a problem that must be addressed.  Pennsylvania taxpayers deserve to know where their money is going, and how we can efficiently ensure a strong infrastructure for future generations.”

She explained that the study is both appropriate and vital as a valuable tool to assess our State Highway Maintenance funding program.

“As the legislative and executive branches grapple with transportation policy and funding, it is important to have accurate and current data,” Senator Baker emphasized.  “A modern assessment of how the factors in the formula should be weighted, according to documented needs and anticipated outcomes, will be an extremely useful tool.”

At the open house, Baker also noted that several municipalities and counties in western Pennsylvania are pursuing a lawsuit against PennDOT’s proposed bridge toll projects.

Hall said the county would be looking at the possibility of joining in that suit.

Several people voiced concerns of traffic that would divert off of the interstate to avoid the toll and travel Route 11, including New Milford Twp. Supervisors Jack Conroy and Scott Ferenczi.

Conroy said the traffic diversion would be a “disaster.” He said that when there is a vehicle wreck on I-81 that diverts traffic onto Route 11, the township has been unable to get out with their snow plows.

“It’s not good now and it’s only going to get worse, “Ferenczi said.

New Milford Borough council members in attendance saw plans that included the installation of turning lanes and a traffic signal at the Route 11 & 492 intersection. Council President Teri Gulick got her first look at the map at the open house and had questions about the addition of the turning lanes and signal maintenance.

PennDOT District 4 Director Richard Roman said the cost of the toll has not yet been set, but expected it to be $1-$2 for passenger cars; and tractor trailers would pay four to seven times that amount.

He also said that the diversion traffic onto Route 11 from the highway would not be as significant as the local residents and officials believe it may be. He said the trucking industry is based on timing and they would not be deterred from their schedules by the toll.

The open house was conducted as part of a 30-day comment period on the bridge that also includes an on-demand virtual public meeting that is available online at www.penndot.gov/i81Susquehanna until 11:59 p.m. on Dec. 8.

PennDOT is re-evaluating a Categorical Exclusion that was previously approved for the I-81 Susquehanna Project under the National Environmental Policy Act to examine how bridge tolling might affect local communities and how the alternate routes drivers could take to avoid the toll might impact local traffic and roadways.

Online comments can be submitted directly from the meeting website or via the below methods. All comments will receive equal consideration regardless of the method of submission.

For more information, see the project website at www.penndot.gov/i81Susquehanna.

Be the first to comment on "Proposed toll raises concerns"