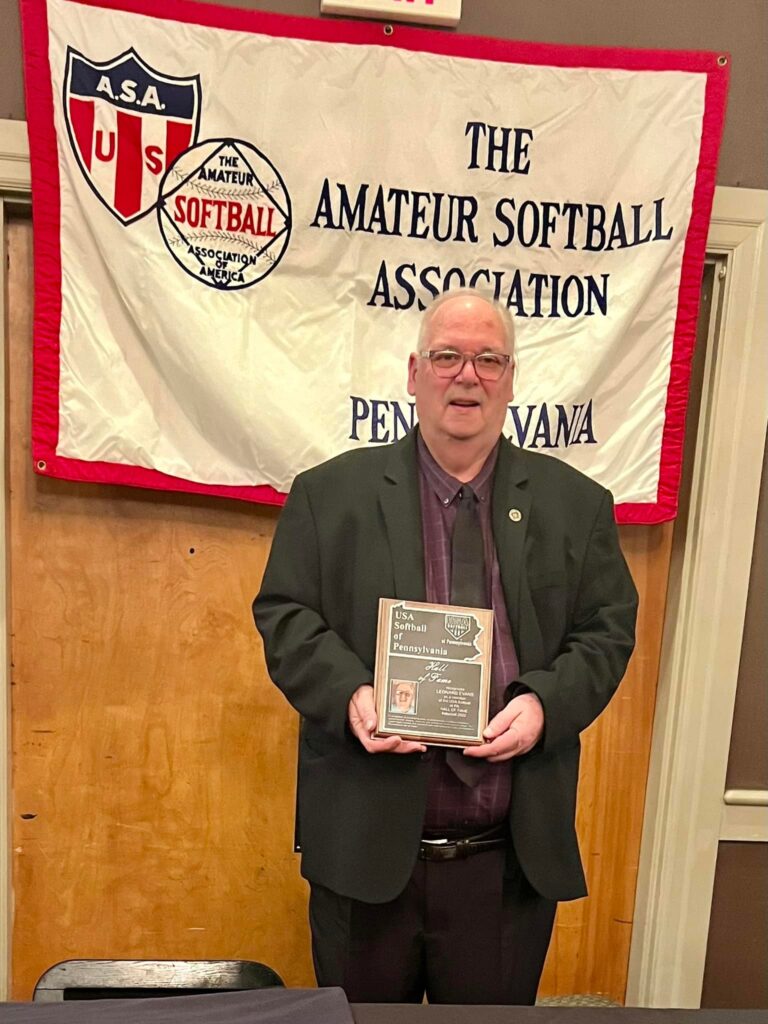 After leading several local softball teams to state titles and serving as a USA/ASA softball deputy commissioner for over 30 years, the Hall of Fame doors opened for Hop Bottom’s Leonard Evans.

Evans who managed and played for several local teams gained notoriety for the modified softball team Ace Robbins. In 1987, the Ace Robbins team climbed through the loser’s bracket to win five games and capture the 10-man modified state title.

Over 24 family, friends, and former teammates travelled to the USA/ASA Hall of Fame induction ceremonies held at the Holiday Inn in Grantville, on March 5. Among the group, Evans thanked his wife, Patricia, for being by his side for 40 years.

Evans is extremely honored to be inducted and reflected on the rich softball past of the area.

“I’m really humbled by it,” said Evans.
“There was a stretch in the 1970s through the 1990s where we had some great teams and players come out of this area.”

In his speech, Evans noted the rarity of something like this happening to someone from a small-town area. “I’m proud because growing up in small towns like Hop Bottom, things like this don’t happen very often,” said Evans. “But it is the same community that has made me who I am, so that is who I am representing today.”

Evans retired as a player/manager in 1992. He played and managed modified teams sponsored by Ace Robbins, Peoples National Bank, and TC Generator. In his time, his teams won four league titles and two state tournaments.

Before and after his retirement, Evans has been active as the Deputy Commissioner for District One that represents Susquehanna, Bradford and Wyoming counties within the USA/ASA softball organization.

“The world was a different place in 1985, but to be able to serve with guys like John Rokish, and Ron Trimbale for almost 40 years, has been rewarding and beneficial to the communities,” said Evans during his speech.

Evans became the third local player or manager to receive induction into the USA/ASA softball Hall of Fame joining Bob Strait, who was inducted in 1984 as a manager for Cavanaugh Well Drilling and won National titles in 1981 and 1982, and one of the pitchers of those teams, Donald Johnson, who was inducted in 1992.

Athletes ready for next steps in playing career

1 Comment on "Evans inducted into softball Hall of Fame"