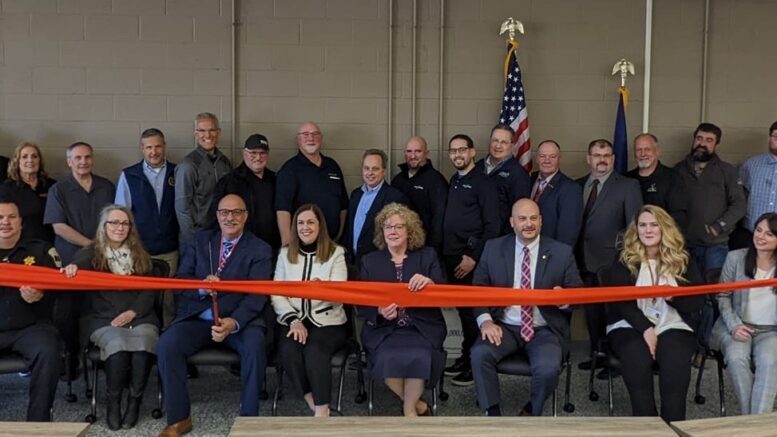 A ribbon cutting event at the Susquehanna Public Safety Complex was held Friday, April 29, with elected officials and all those involved at various levels of the project joining in for the event. STAFF PHOTO/STACI WILSON

A ribbon cutting event at the Susquehanna Public Safety Complex was held Friday, April 29, with elected officials and all those involved at various levels of the project joining in for the event. STAFF PHOTO/STACI WILSON

Twelve years and $20 million culminated on Friday, April 29, with the formal opening celebration of the Susquehanna County Public Safety Complex in New Milford Twp. The complex is approximately 42,000 square feet within three buildings and covers about 17 acres of land.

“This is truly a great day for Susquehanna County residents,” said Commissioner Alan Hall, as he opened the ribbon cutting event.

The complex houses a climate-controlled PPE storage facility; the county coroner’s office; garages; the district magistrate’s office; instructional area that can serve as an emergency shelter; 911; and emergencmanagement, complete with a state-of-art emergency operations center; and a new 250-foot tower – critical for communications and emergency services.

“This facility will serve residents for the next 50 years,” Hall said, noting the technology incorporated into the design.

Hall offered up a brief history of the project that began with sitting down with employees to develop what was needed. He said the parameters were that the facility needed to be efficient, maintenance free, last 50 years, and not be a burden to county taxpayers.

Hall thanked county businessman Andy Aulakh, who donated the acreage to the county where the facility it located. The property was appraised at over $1.7 million. “We are so blessed to have you in the county and doing business in the county,” Hall said.

He also noted that the commissioners made a commitment to not raise taxes or incur debt while taking on the construction. “We were able to do that,” Hall said.

The county received $1.5 million in a state RACP grant.

“To see a world-class facility in New Milford Township is fantastic,” Baker said.

Hall also said it was the natural gas money the county received in Act 13 funds through the years that enabled the building to come to fruition.

George Stark, Coterra Energy spokesman, said, “You’re seeing the benefits come back. We take pride that things like this are the legacy we leave behind.”

PEMA Director Randy Padfield said, “Look at this facility! It is great to see everyone come together with the right resources, at the right place at the right time.”

Hall said that everyone in the building for the ribbon cutting helped to “get us here.”