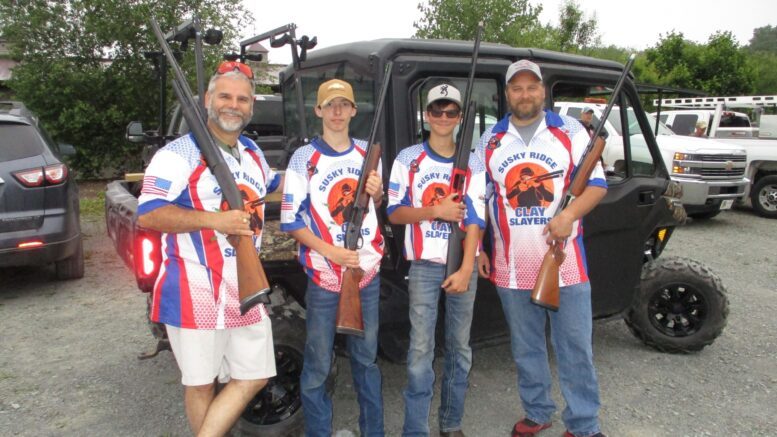 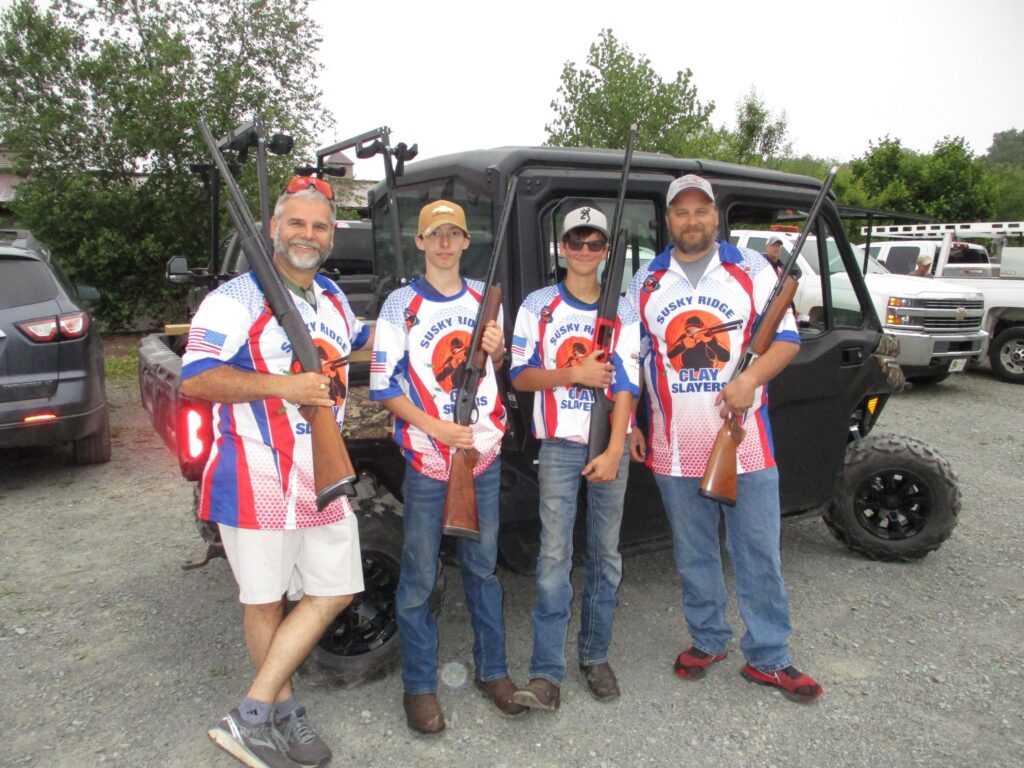 An overflowing parking lot at Rock Mountain Sporting Clays in Auburn Township was the first clue that Friday’s Clays For Kids shooting tournament was going to be the biggest ever.

The morning fog lifted just as the event began, and the sun broke through to quickly warm the course as 76 shooters – 18 teams and two individuals – set out to try their luck at 17 shooting stations.

It was the seventh year for the event, proceeds of which go to the Children’s Advocacy Center (CAC) of Susquehanna and Wyoming Counties, which operates under the umbrella of Family Services Association (FSA) of NEPA.

The CAC offices, located just off Route 29 south of Montrose, provide a safe location where law enforcement officials can work with CAC staff to investigate allegations of abuse or neglect of children and provide counseling to victims, as well as to witnesses of violence.

“Your participation in this event greatly helps us to meet those needs and provide those services,” CAC director Janine Fortney told those in attendance.

Trion Industries and Williams were the two key sponsors of the event, with Trion entering two teams and Williams one. Other teams were amalgamations of coworkers, past participants who brought friends, and some who simply appreciated the opportunity to shoot. The cost for participation was $400 per team and $125 for individuals.

Tom Adornato, a teacher in the Susquehanna Community School District got into trap shooting with his friend, Dave Passetti. Then they 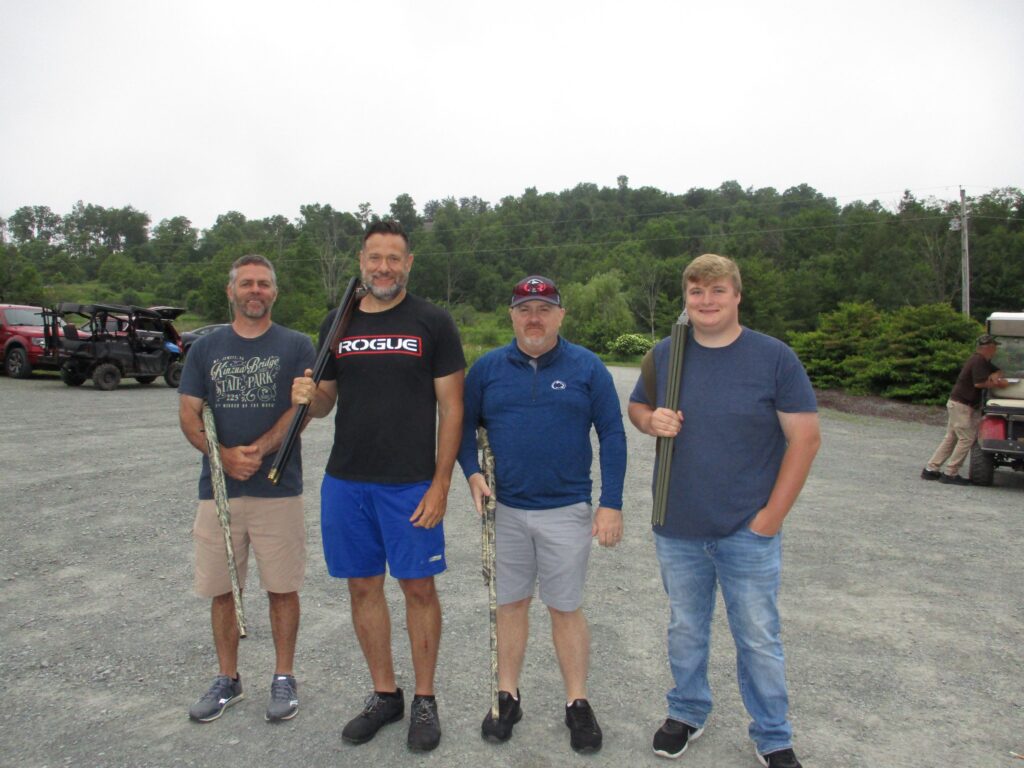 started trap shooting with a group of kids from the school.

“When we heard that they were doing this, we decided to join in,” Adornato explained. “We’re here to support the students.” He, Passetti and two other friends formed a team called Squadra Italia,

Phil Radichi, another Squadra Italia member, was more aware than most of the participants of the services provided by CAC. “That’s a big part of it for me,” he stated. “If I can do something that I like and support a good cause, that makes it all the more worthwhile.”

Though there may have been more female contestants in previous years, youths were especially well-represented on June 24. A group called the Susky Ridge Clay Slayers, adorned in colorful team shirts, was coached by John Ord, a computer tech teacher in the Susquehanna Community School District, and Jimmer Warren, a dispatcher for RHL Companies.

The two youths on their team had participated in similar tournaments, Ord related, but it was their first time at Clays For Kids.

Ord credited the school nurse for getting the word about the tournament out among the faculty. The school has “jeans days” on Fridays throughout the year, where faculty members can wear jeans in exchange for a $5 donation for a specific charity. Ord found out that there was one such day left on the school calendar and got permission from the superintendent to earmark it for CAC and Clays For Kids, raising enough money to cover the entry cost for the team.

FSA CEO Sean Gerow and Fortney know that many people coming to Rock Mountain for the first time are there for the sport, the camaraderie, or because their company asked them to participate. But they make sure that the shooters fully understand the impact of their involvement with a presentation about CAC at lunch time.

One of the biggest challenges that Gerow and his associates faced in setting up this year’s tournament was the rising cost and limited supply of ammunition.

“Through Rock Mountain, we’ve been able to offer the ammo as part of the cost of participation. If we couldn’t do it, we probably wouldn’t have had the event,” he related.

Several shooters indicated that the inclusion of ammunition influenced their decision to take part. Gerow added that he felt the gradual waning of the pandemic also brought out more people.

Fortney was excited with the turnout, noting that initial response to the opening of registration was swift, followed by a lull. In the week prior to the event, though, the rest of the roster filled up.

In addition to serving as a charitable outing for coworkers from a wide variety of supporting companies, Clays For Kids is a true family affair for others. Jimmers and Kaiden Warren on the Susky Ridge team are father and son.

Athens High School junior Connor Thetga shot with his mother, Kim, as a two-person team. Connor has been shooting clays since he was 12, and mom Kim is just getting started in the sport.

Fortney’s son, Austin, was one of four Lackawanna Trail seniors competing together. And cousins Scott and Adrian Zanon shot with their wives, Nina and Amanda. It was the second time at Clays For Kids for the Zanons. Nina works at the Wyoming Valley Children’s Association and said that she likes the idea of supporting a like-minded non-profit like CAC.

When all was said and done, Connor Thetga was the youth winner of the tournament, Kim Thetga had the highest female score, and Tracy Gregory did the best among adult male participants.