It’s hard to imagine today nearly 200 employees and guests dressed in their finest willing to be hoisted in baskets to the temporary deck of the new bridge for a dance party held on Sept. 3, 1914. PHOTO COURTESY BROOKLYN HISTORICAL SOCIETY 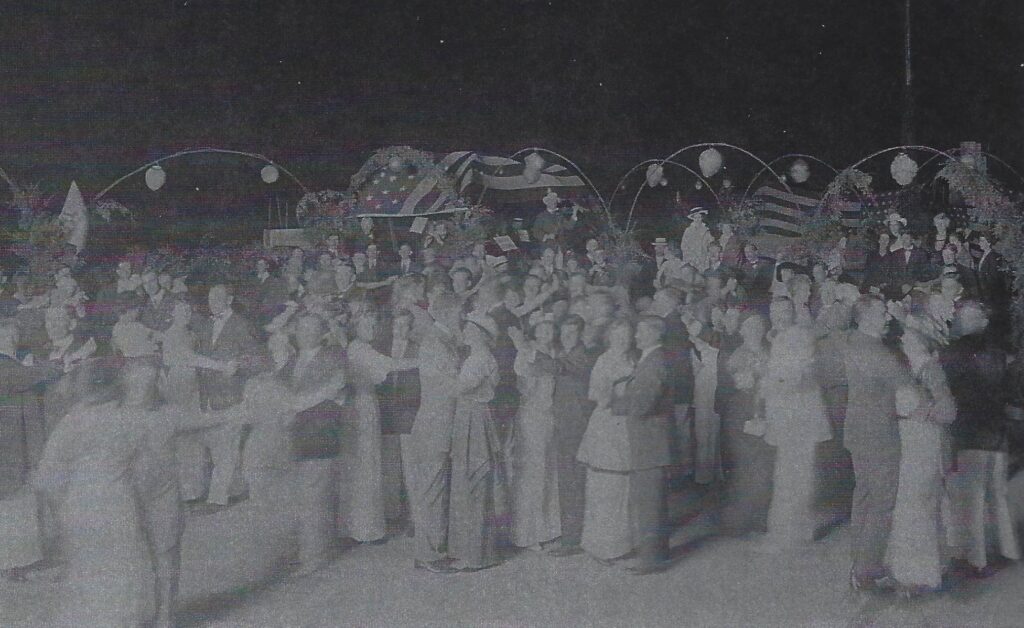 It’s hard to imagine today nearly 200 employees and guests dressed in their finest willing to be hoisted in baskets to the temporary deck of the new bridge for a dance party held on Sept. 3, 1914. PHOTO COURTESY BROOKLYN HISTORICAL SOCIETY

The massive Martins Creek Viaduct, constructed between 1912 and 1914, was just one of a series of bridges, overpasses and tunnels that helped reduce both the grade and curvature of the rail line between Clarks Summit and Hallstead. It endures as one of the most visible representations of a nearly forgotten era when railroads were the driving economic force in the United States, and it is now easier to view from a distance.

The BHS spearheaded the clearing and construction of the overlook, which had previously been a pull-off with room for no more than two or three vehicles at a time. The ribbon cutting will follow the annual business meeting and election of officers, which begins at 2 p.m. at the Brooklyn Universalist Church on Maple Street.

The Martins Creek Viaduct, also called the Kingsley Bridge, is often overlooked as the smaller sibling of the Tunkhannock Viaduct at Nicholson. But it was completed first and was for a few years the largest reinforced concrete bridge in the world. It retains its second-place ranking in that category to this day.

Its construction was financed by the Delaware, Lackawanna and Western Railroad Company (D, L & W) and overseen by bridge designer Abraham Cohen. When it was finished, the D, L & W threw a lavish dance party on its deck for 200 employees called the Ariel Dance. One of the remaining construction derricks was used as an elevator to carry guests to the top of the structure where they enjoyed music by the Oppenheim Orchestra from New York City. Local newspapers dubbed the event the ‘Cloud Dance’ due to its loftiness.

The “New Line,” as the improved railroad was called, not only increased safety and cut down on the time that it took to move freight and passengers through the area, but it also dramatically altered the ethnic composition of the region with the influx of Italian, German and Eastern European immigrants who settled into the small towns along its path.

Cohen and his team employed the latest bridge building technologies, many of them developed for the construction of the Panama Canal a few years prior. The engineering of the arches – 15 in all – was so complex that the American Society of Civil Engineers sent hundreds of practicing engineers from the New York City area via the old rail line to visit the building sites at Martins and Tunkhannock creeks.

The changes to the villages of Alford, Kingsley, and Hop Bottom through which the New Line ran were dramatic, as the project took the railroad out of the center of the towns.

According to a book about the Martins Creek Viaduct written in 2015 by current BHS president Dr. John Martin Darcy II to commemorate the 100th anniversary of the undertaking, new railroad stations were built in each village. It’s easy to see from the exquisite photos recreated from glass plates that the old rail bed became the foundation for much of U.S. Route 11 that runs through or alongside the towns.

Alford held particular prominence because it served as a crucial junction between the D,L&W line and a seven-mile spur that connected Montrose with the rest of the world. The Alford-Montrose spur was abandoned in 1943, and the line was eventually deeded to the PA Rail-Trail Council to become part of the organization’s network of recreational trails.

The Martins Creek Viaduct still surprises many travelers through the area when they come upon it, though it has been enjoyed by local residents and anglers for 110 years. It was initially more visible because of the number of farms spread across the hillsides that had been largely deforested for both agriculture and timber.

“I can remember as a youngster the large number of troop cars going over the railroad, as well as tanks and army vehicles,” recalled Richard Zick, the former BHS president credited for leading the overlook project. “It roused my curiosity and interest. As the vegetation on Route 106 from Kingsley to Lenox obscured the bridge in its entirety, you could only see it from the Milford-Owego Turnpike that ran right down through the center of the farm.”

Zick’s father purchased the former Ely farm and moved the family there in 1943, their house having originally been a stagecoach stop on the turnpike where travelers would spend the night and stable their horses. The once busy thoroughfare was renamed Zicks Hill Road when the turnpike fell out of favor to the railroad and the new Lackawanna Trail highway.

The aforementioned pull-off on Zicks Hill Road was utilized by those who knew of its existence, but it also attracted people who did not respect it as private property. Zick joined the BHS, members of which sought to create a permanent overlook that could be enjoyed by travelers and railroad enthusiasts for many years to come.

In 1995, the 625-acre farm was broken into smaller parcels, and Christopher Simone bought a 10-acre parcel on which the overview is located. “He is a train enthusiast, and we thought that Mr. Simone might be interested in allowing us to put an overlook in,” said Zick. “He agreed, and the spot was picked out that had a full panoramic view of the bridge.”

The BHS formed a committee and has been working steadily on the project since 2011.

The endeavor received substantial financial support from the PA Department of Natural Resources (DCNR), the Endless Mountains Heritage Region (EMHR), the Susquehanna County Room Tax Fund administered by the Endless Mountains Visitors Bureau, People Security Charitable Foundation, Molenko Sign Company,  and many other local businesses and individuals that are credited with donating time and equipment and providing materials at or near cost.

Zick also credits the cooperation of the township supervisors who started unloading extra fill at the site until it was large enough to build upon. So many local business owners and residents stepped up to support and help with the construction that it would be impossible to acknowledge all of them, but Zick maintains that its completion would have been impossible without Rick Masters, Craig Robinson, John Arnone, and Joe Thomas.

“Just doing the project brought together different people in the community,” past BHS president and EMHR board member Dave Palmer concurred. “It gives the local people an opportunity to be proud of our history. There are still local people here whose family members worked on the bridge.”

Palmer and Zick agree that the overlook has already been discovered as a popular new attraction. Cameras installed for security purposes show ongoing visits to the site. “Not a day goes by that I don’t see some activity there,” Zick remarked. “People see it and stop and take photos. People have set up easels and painted pictures or set up video cameras to catch one of four Norfolk Southern trains per day that cross the bridge. People have been very respectful, and we appreciate that.”

Readers interested in attending the ribbon cutting ceremony should gather at the Brooklyn Universalist Church, from which they will be shuttled by school bus to the site. Zicks Hill Road is fairly narrow, and there will not be enough room for additional vehicles. The meeting is open to the public, and the bus will depart from the church to the overlook at about 4 pm. For updates and more information, interested readers can follow the Brooklyn Historical Society on Facebook.