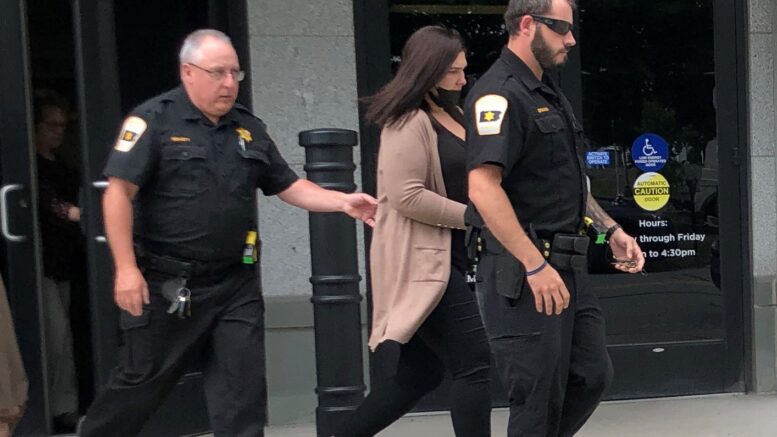 Paige Scully is led from the Susquehanna County Courthouse by sheriff deputies after being sentenced to serve three years in prison for the November 2020 DUI crash that claimed the life of her 4-year-old daughter. STAFF PHOTO/STACI WILSON 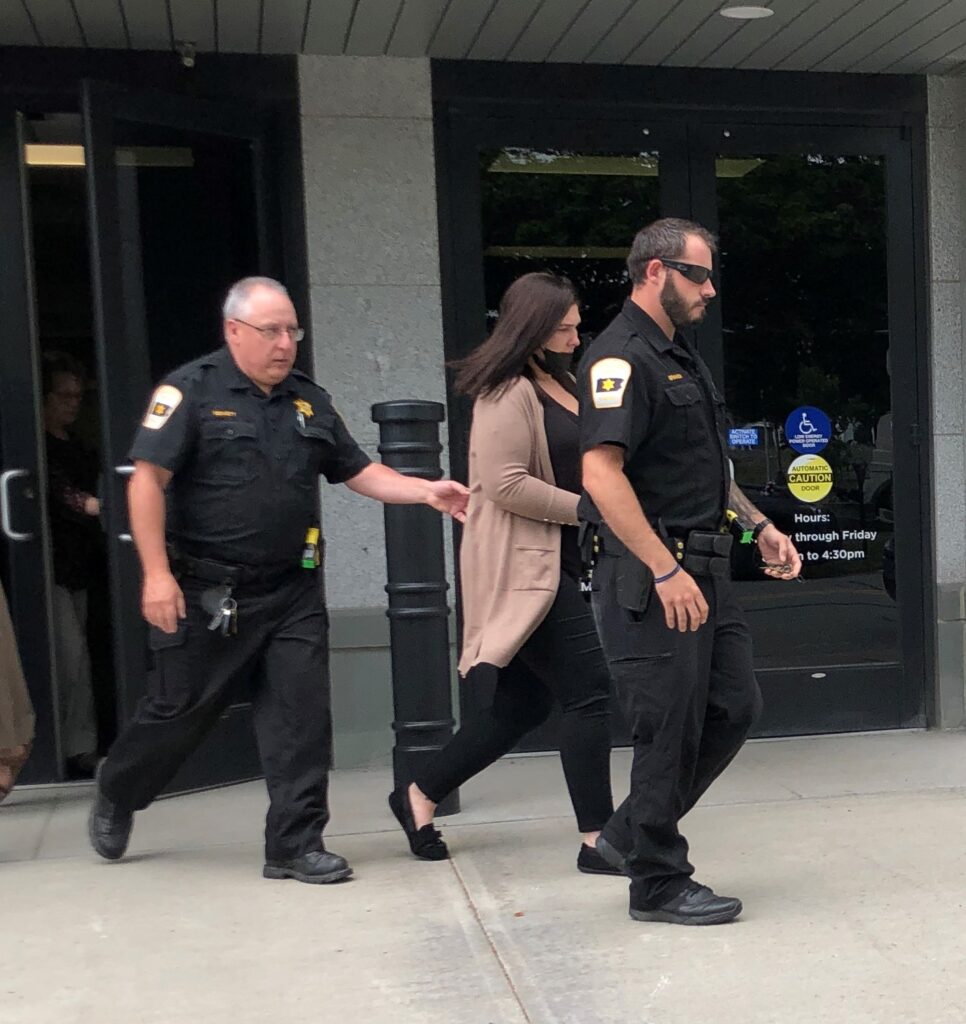 Paige Scully is led from the Susquehanna County Courthouse by sheriff deputies after being sentenced to serve three years in prison for the November 2020 DUI crash that claimed
the life of her 4-year-old daughter. STAFF PHOTO/STACI WILSON

The mother of a four-year-old girl killed in a Rush Township car crash in November 2020 has been sentenced to serve three years in state prison.

Paige Scully appeared for sentencing on Wednesday, July 6, before Susquehanna County President Judge Jason Legg on a count of homicide by motor vehicle while DUI. The judge noted he was bound by the mandatory minimum sentence of three years, but credited Scully with 596 days she has spent on bail supervision.

Judge Legg said the court had received a large amount of letters that had been “generally supportive.”

Scully’s defense attorney William Thompson Jr. told the court that his client has accepted full responsibility. “This is by far the most tragic case I have been involved with, it absolutely breaks my heart,” he said.

Thompson detailed Scully’s transformation since the crash that killed her daughter, including her journey to get sober and seek treatment and therapy, as well as her involvement in the Pathways Program.

He said this is something should has to live with for the rest of her life. “I don’t think anyone can punish her more than she punishes herself,” Thompson said.

Scully also spoke at the hearing, saying the past two years have been “emotionally devastating” for her, starting with the death of her daughter’s father in April 2020.

“I didn’t know what to do with that pain,” Scully said. “I started to cope by drinking. It was the worst thing I could have done. A recipe for disaster.

“I love my daughter more than anything in this world. She made my life worth living. Not a day goes by I don’t think of her and her daddy. We had plans,” a tearful Scully told the court.

Through recovery programs, Scully said she has found her life’s work. “I want to help people. That is my mission now, my way of honoring my daughter.” District Attorney Marion O’Malley said she also read the letters of support offered to the court.

“Paige Scully chose to get intoxicated,” O’Malley told the court. “In a TikTok video posted that day she bragged about getting free alcohol.”

O’Malley said that later that night, Scully drove to a local bar with her daughter. She said videos from the bar that night show the child sitting on barstool, largely unattended by her mother.

The district attorney said Scully left the bar, traveling south on Route 367, which had a posted speed limit of 40 mph, but she drove the winding dark road at a speed of 69 mph.

“What we know of the mangled remains (of the vehicle), the car seat was not properly installed,” O’Malley said. She also stated that it was possible that the child was not in the car seat, but possibly seated on Scully’s lap.

The crash, said the district attorney, sheared off a utility pole and the vehicle struck other objects. possibly not even in it, possibly on her mother’s lap

“That is where Aubree met her end,” O’Malley told the court. “She said Aubrey came first, that is not true,” adding the reckless and dangerous behavior spoke to someone who was “only thinking of herself.”

O’Malley said that at four years of age, Scully’s daughter “never will have all the opportunities a child should have.” 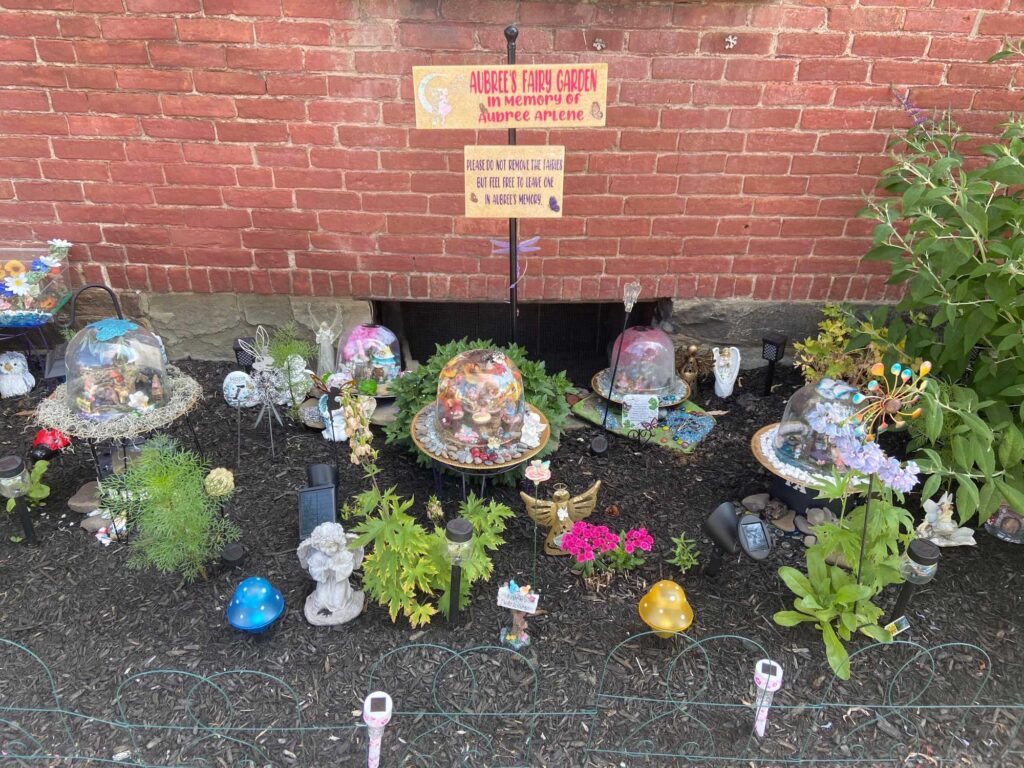 In remembrance of her daughter, Paige Scully
installed a Fairy Garden next to Trehab’s
Community Resource Center on Church St.,
Montrose.

She said that Scully’s “life purpose” can be served in a state facility.

“This is Aubree’s story – not anyone else’s. Aubree was four years old when she died. Her life goes no further than that.”

Judge Legg said he disagreed with the district attorney. “Those with faith know Aubrey’s journey did not end. With certainty as a person of faith, Aubrey forgives you,” he said to Scully.

He also said that he found what she has done since the crash to be both impressive and inspirational. “You have a gift and are surrounded by a community that extraordinary and have taken advantage off all of that. You have chosen a far more difficult path, a path that would honor Aubrey,” he said.

Judge Legg commended Scully on the fairy garden she installed next the the Trehab Community Resource Center in honor of her daughter.

He also noted that if the DUI crash had not caused a fatality, the punishment would be a “slap on the wrist.”

Judge Legg said, “You continue to touch lives wherever you go.” He said she would have the opportunity at a state facility to make a difference.

“Whatever we do to punish you, the jail you are in is self-imposed,” said Legg. “The people around you know what you did and love you and forgive you. You will have an impact. God has a plan for you. Today starts new part of your journey.