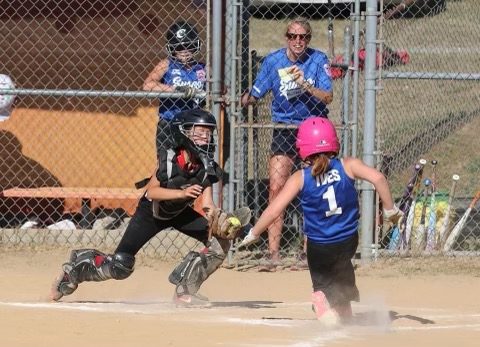 Just as they had for most of the tournament, the Susquehanna County Minors All-Star Softball team used baserunning opportunities and superior pitching to claim the Little League District 15 championship with a 11-2 win over Troy.

Susquehanna County jumped out to 2-0 lead in the first inning as Alyssa Wiser and Rylee Traver reached base and came around to score.

The locals scored what proved to be the winning runs when the bottom of the order came through. Olivia Bowman, Alexa Ives, and Lexi Mosher each earned walks and took advantage of baserunning opportunities to score.

Susquehanna County added a run in the fourth inning as Bowman scored again after walking, and three runs in the fifth as Traver, Anna Evans and Miah Rosin all scored.

Evans handled the pitching duties – striking out 11 over five innings while yielding two runs on three hits and a walk.

The championship win was the culmination of a dominant run through the District 15 bracket. After going undefeated in pool play, Susqco earned their trip to the championship with a 14-8 win over Canton in the quarterfinals and an 8-3 win over Troy in the semifinal.

With a team comprised of girls from four different local teams (Montrose, Choconut, Rush and Auburn), Coach Dylan Traver felt the girls run was aided by their ability to gel as a team so quickly.

“I am extremely proud and impressed at the way the girls came together as a team,” explained Traver. “It seemed almost instantly. The second they stepped on the field together they were no longer individuals – they were a team.”

Besides the team chemistry Traver has really been pleased with the team’s work ethic and commitment to get better.

“A big key to the success this far has been work ethic,” said Traver. “They strive to improve  at every practice no matter how good or poor the last game was.”

Susco will open Pennsylvania Sectional play tonight with a trip to Wellsboro where they will square off against the winner of Tuesday night’s game between Selinsgrove and Williamsport.