The Lathrop Street Elementary Archery team finished first at the state archery tournament held earlier this month in State College. The team, along with Choconut Valley, who placed third, and the Montrose Middle School team that also placed finished in third, qualified to participate in the national tournament. PHOTO COURTESY AMY LYDEN 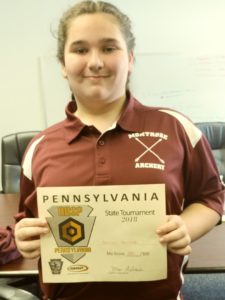 Lathrop Street fifth grader Jasmine Bennett scored 280 out of a possible 300 at the state tournament, setting the record for the highest score ever by an elementary girl.

After taking several top spots in statewide meets, 54 members of archery teams from different schools in the Montrose School District will travel to Kentucky this spring to compete in a national archery competition.
Top scorers from the district’s Lathrop Street Elementary School, which won first place for elementary schools in the state competition, were celebrated at a special assembly at the school Friday morning.
Passing through lines of cheering students holding balloons, the archers entered the gymnasium to deafening applause from coaches and classmates, friends, family and faculty. Some of the balloons, once released, exploded in loud bursts after hitting hot lights in the ceiling. Numerous special certificates were awarded.
Lathrop Street’s Jasmine Bennett won the highest score ever for an elementary girl at the Pennsylvania State Tournament held in State College earlier this month with a score of 280 out of a possible 300, chief archery coach Tom Oleniacz told the audience.
“Not only were you the number one elementary team in the state, you turned in the highest score ever for an elementary team,” Oleniacz said.
The top 10 girl elementary archers in the state all came from the Montrose School District, with nine from Lathrop Elementary and the tenth from Choconut Valley Elementary.
Other top scorers included Gabrielle Timm with 273, Ava Castrogiovanna with 264, McKenna Thomas with 262, and Alanna Welsh with 261.
Overall the Lathrop Elementary Team placed first, Choconut Valley Elementary placed third, the Montrose Middle School came in at third, and Montrose Area High School scored fifth, according to team coordinator Amy Lyden.
“We have never before had all the teams place so high at this state tournament,” Lyden said.
Oleniacz has competed and shot a bow and arrow for over 40 years.
“Standing on that line, you feel like a bowl of Jello. I know what those kids are going through,” he told the audience.
The Lathrop Street Meteors group will join other local archers, such as Ethan Brown of the Elk Lake Warriors, at the National Archery in the Schools Program Eastern National Competition in Louisville, Kentucky, May 10 to 12. Brown placed second in the state for high school boys at a lead up archery meet in State College earlier this month and has been recognized by the Elk Lake School board.
The Lathrop Street team has started fundraising efforts to cover the costs of bringing their archers to the tournament, explained team coordinator Lyden. Each tournament fee per archer is $35, so for all three tournaments the cost is $105 per archer, she explained.
“We are raising money and soliciting businesses to help offset these costs and to help the families with the large expense of travel to Louisville for this 3-day event,” Lyden said.
The Lathrop Elementary Archery Team has distributed fliers around town asking for donations which can be mailed to Montrose Archery, c/o Montrose Area High School, 75 Meteor Way, Montrose, PA 18801.
In addition to other fundraising events still being planned, the team will also be holding a Quiver Drive from 9 a.m.-5 p.m. in the Montrose Mall Shopping Plaza in front of Ray’s Market on Friday, March 30, and Saturday, March 31.