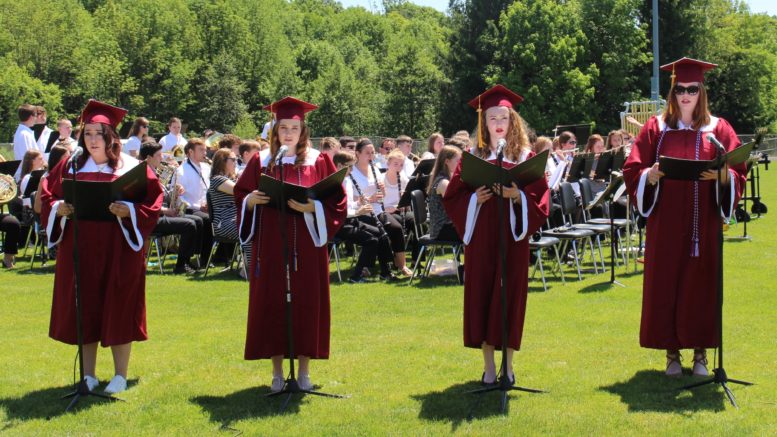 The weather could not have been better for an outside graduation – blue skies and plenty of sun provided the perfect backdrop for 125 Montrose Area seniors to finally graduate.

Seniors gathered before the ceremony in the school’s back gym, taking photos, sharing last minute words of good luck and congratulations and nervously awaiting the most anticipated moment of their high school career.

The MAHS Jr/Sr band, led by Suzanne Bennici, played the processional march for the seniors on their long walk from the gym to the stadium’s track, where they were greeted by packed stands filled with relatives, friends and teachers. After the invocation by Ryan Wilcox, the graduating members of high school choir sang a beautiful rendition of the national anthem.

Once the crowd was seated, Principal Eric Powers asked the graduating class and the audience to recognize the four seniors who committed to the Armed Forces: Donovan Baker and Brendan Hurlbert-Russell, Marine Corps; Michael Redding, Navy; and Caleb Reyes, Air Force.

Class president Seth Bulkley introduced the senior class by recognizing some of their teachers. He thanked Daniel Cherney, Cultures teacher, for being so passionate about teaching and his ability to “wake someone up from across the room.” He thanked Daniel Lukasavage, Graphics teacher, for “showing us we did not need to be proficient in drawing or painting to be artistic.”

Finally, Bulkley thanked Government teacher Hillori Schenker for preparing them for life after high school by doling out advice for the many different paths of life. The right to petition and protest and the right to remain silent, which after he pointedly looked at his classmates said, “Don’t forget that one guys,” and drew laughter from the crowd.

Next to speak was Salutatorian Kayla Eshbaugh. She focused on the joining of the two elementary schools in 7th grade, and the initial divide based on which school they attended.

Eshbaugh remembered English teacher Charlotte Sherwood’s challenge of sitting with students at lunch they thought they had nothing in common with, and “before we knew it, it was hard to remember a time when we were not together.”

Valedictorian Matthew Lonzinski also reflected on the meeting of the “Lathrop Street Meatballs and Choconut Coconuts,” the initial divide and then “quickly forming a family bond.”

It was in seventh grade that Lonzinski set big goals for himself, including becoming his class valedictorian. “I decided I would always try as hard as I could, with everything I did.”

He made several career choice changes in his young life – from cowboy, to radiology technician, to finally a science teacher – inspired by his work with both the IONS Club and I-Safe at MAHS.

Lonzinski’s hard work paid off, as he earned a full tuition scholarship to Kutztown University. “I have been so blessed to have been a part of such a loving family of classmates and teachers that I want to make the same experiences available for generations to come.”

The graduating seniors accepted their diplomas with smiles and to the cheers and applause of their families and friends. Some celebrated with a funny victory dance back to their seats.

After the singing of Montrose’s Alma Mater, led by seniors Elizabeth Bennici, Samantha Gurn, Jordann Monaco and Grace Wood and accompanied by the band, President Seth Bulkley and Vice President Tyler Dovin led the class in moving their tassels from the right to the left to signify them officially becoming graduates of Montrose Area High School.

Be the first to comment on "Montrose Area graduates 125"