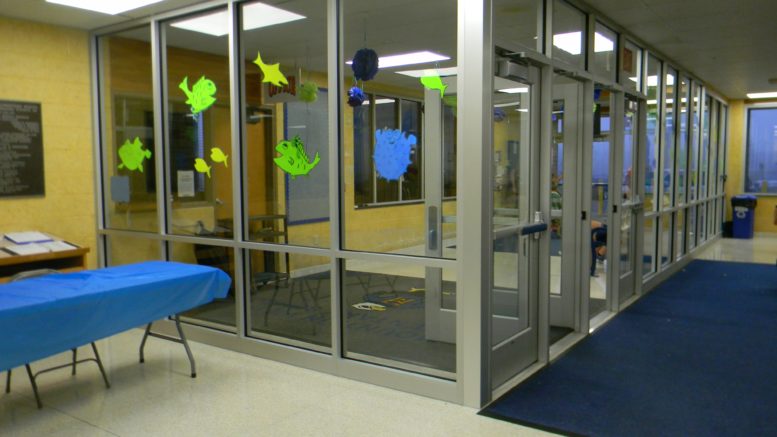 The new vestibule in the Mountain View Elementary School has been dubbed the “fishbowl” by administrators and aptly decorated. The addition offers a new layer of security at the entrance of the building. PHOTO BY COREY GESFORD

Despite concerns that mold discovered in a few Elementary School classrooms might be the reason to delay the start and not the finishing construction project, school opened as scheduled and elementary students were greeted by a couple extra security measures.

A new bus drop-off procedure had the buses dropping students off directly to the curb, a new vestibule and the new School Resource Officer met students at the door along with Principal Dr. Chris Lake and staff.

Retired Pennsylvania State Police Officer James Bernosky was hired to act as the School Resource Officer. Vetted and approved by the Susquehanna County Commissioners, Bernosky will be on campus alternating between the two schools which sit on separate sides of State Route 106.

Bernosky was there as students arrived and later in the morning met with high school students during class meetings. He will be going class to class to meet the Elementary students.

“Kids have been terrific, easy to get along with and friendly,” Bernosky said.

Principal Lake stressed that while Bernosky is there to act in case of emergency, he also serves as another avenue for students to address their concerns when they feel threatened, a role that Lake feels reinforces Bernosky’s title.

“He will be resource for them to go to if they (students) feel bullied or unsafe in any way,” said Lake. “He’s going to make himself very present.”

High School Principal Robert Presley introduced Bernosky to the students during the class meetings so that they would understand why he is in the building and so that they are not caught off guard by his presence. Bernosky is authorized to carry a firearm while he conducts his duties at the school and Presley did not want students to be alarmed by that.

“I just re-explained why he (Bernosky) is here, that it’s another thing to keep them safe, this is who he is and not to be alarmed by the firearm,” said Presley

Presley said staff reaction is split but not divisive on Bernosky’s presence and most understand that the recent events around the nation have prompted this action.

“For the most part it’s a welcomed thing, just one more layer of feeling safe,” added Presley. “It’s sad that we have to do it in today’s world…but in today’s world we have do everything we can.”

While Bernosky was in the elementary students’ presence, their attention was drawn more to the new vestibule that extended the old vestibule and leads visitors directly by the Elementary Office rather than immediately giving them access to the main hallways of the school.

Coined “The Fishbowl” by Lake the entrance is decorated with pictures of fish; but serves to address a central concern about safety. Lake said the vestibule was being decorated to give a warm welcoming feel as well as providing extended safety for the students.

“We had Kindergarten parents here for orientation, many of the parents were complimentary,” said Lake. “They were excited about the safety issue (being addressed).”

While safety is at the forefront of the elementary portion of the project, health was also a concern when district parents received a phone call Friday before school started that the facility was experiencing an issue with mold due to the unusual wet and hot weather.

Mountain View Superintendent Karen Voigt confirmed that mold was found in a few rooms in the school and that several factors played into the occurrence. The weather combined with the fact that the elementary school was shut down from the normal summer activities. While District teachers had three days of in-service the week before Labor Day, Elementary teachers were not allowed into their classrooms until the third day.

Voigt said that while the construction probably also played a part in the mold, it also helped in addressing the issue as well.

“Through the contacts that the construction contractors had, we were able to get a specialist up in 24 hours,” said Voigt.

Air quality was measured Friday and again Monday according to Voigt and it was determined that the school could be opened on time. One kindergarten classroom was moved as a precaution.

Voigt said that she estimates that 90 percent of the construction project is completed. Attempts to reach project manager Bill Slawter were unsuccessful. However, on the first day of classes a small crew was working on the High School roof and an electrical company’s truck was unloading materials into the new pole barn erected behind the high school.

Mountain View Maintenance Director Bob Taylor said that the bleachers in the elementary gymnasium were set to be replaced the week of Sept. 10.

Be the first to comment on "Mt. View safety efforts evident at opening"