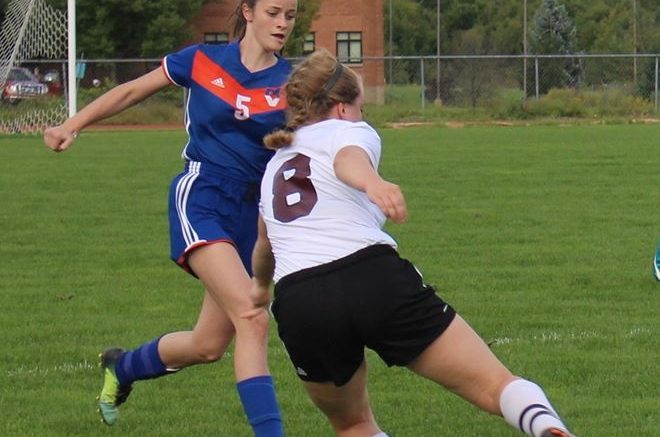 Mountain View did two things that no one else in the Lackawanna Girls Soccer League has been able to do to the Montrose Lady Meteors this season – score and lead.

Natalie Cross put the Lady Eagles up 1-0 with an unassisted goal nine and half minutes into the game and put Montrose into their first deficit of the year as Mountain View hustled and got to a majority of the 50-50 balls early in the game.

“They (Mountain View) acted like every 50-50 ball was theirs, and just put their head down and ran through it,” said Montrose’s Gabby Davis.

Maddy Gilhool soon ended the Montrose drought when she broke free and sent one of the 35 Montrose shots past Mountain View Goalkeeper Sydney Newhart at 18:42. Nine minutes later Gilhool once again freed herself and put Montrose on top.

Rachel Sorenson would score two minutes later to send the Lady Meteors into halftime with 3-1 advantage.

The score would duplicate itself in the second half as Chalice Guyette broke free from the Mountain View defense and score at 56:13.

Sydney Barhite brought the Mountain View faithful back to life with a goal six minutes later, but Gilhool tacked on two more goals to secure Montrose the 6-2 win.

Despite being under heavy fire Newhart was outstanding in the net registering 29 saves on the 35 Montrose shots. Her counterpart Katie Puterbaugh garnered seven saves on the nine Mountain View shots.

Finding themselves down for the first time Montrose was happy to prove that they could come back from a deficit and handle the situation.

“I was really proud of how we pushed through the first little deficit, we didn’t put our heads down,” Davis said.

Mountain View Coach Todd Calabro was satisfied with how his young Lady Eagles responded to the challenge and fought for every possession throughout the match.

While the loss stung, Calabro thought the Lady Eagles gained valuable experience. “It was all about just stepping to the ball, containing their good players, giving each other support, said Calabro. “It’s always great to have the experience to play against a great team and see what we need to do get to that level.”

Montrose Coach Jenton Esworthy was equally impressed with Mountain View’s effort and liked how his team responded to their first deficit.

“They played hard, they won a lot of the second balls, where we fell flat,” said Esworthy. “But high school soccer is a game of momentum, and when we got down, we stayed positive and fought back.”

Earlier in the week Montrose erupted with 10 second half goals to down Lakeland 11-0.

The Lady Meteors lead Division 2 with a 6-0 record on the season; followed by Mountain View at 4-1 and Western Wayne at 4-2.

Cross had a hat trick for Mountain View in their 4-0 win over Holy Cross. Forest City took Carbondale 4-0 and Elk Lake collected a win over Carbondale 3-1. The Lady Warriors dropped a crossover match with Lakeland 3-0.

MV, FC set to clash in district final; Meteors fall in semi round