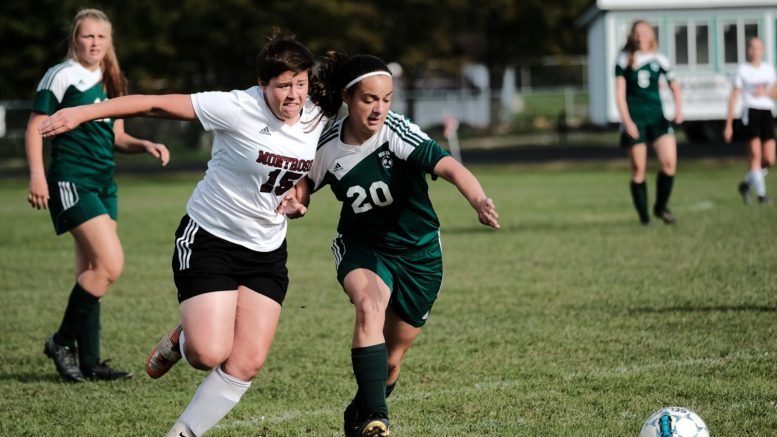 The rain drenched turf was soft on the soccer pitch at Robert Klenk Athletic Complex at Mountain View High School Thursday, but the action was anything but as the Mountain View and Montrose boys battled in an important Lackawanna League Division II contest.

Both teams were coming into the game after tough losses as Montrose had lost to Western Wayne 2-0 two days before; and Mountain View had dropped back to back games to Blue Ridge and Forest City.

Each squad had chances throughout the first half but could not capitalize on them.

Then Eagle Zach Polovitch turned the game around with a heads-up play. With Mountain View on the attack with just under two minutes to play in the first half a Montrose defender was called for a trip just outside the 18. Polovitch quickly put the ball down as the Montrose defense slowly set up their defensive wall and sent a shot just out of the reach of Meteor Goalkeeper Ethan Hitchcock.

The teams would go back and forth for much of the second half until midway through the second  half a miscommunication by the Montrose defense resulted in an own goal to put Mountain View up 2-0. The Eagles controlled much of the ball from that point and the Meteors were able to set up few scoring opportunities.

Mountain View Coach Joe Scanlon thought the key to his team’s success was the two days of preparation before Thursday’s contest. Coming off two losses and being rained out on Tuesday, the Eagles were focused on getting better.

“We had to get back to work and practice hard. I wasn’t concerned with who was on our schedule next, it was all about how were going to get better after a loss,” said Scanlon.

Senior Defenders Jason Seamans and Jake Andzulis agreed with their coach and set out to set an example and made sure their younger teammates kept focused.

“We just made sure to keep the intensity up at practice, no goofing off,” said Andzulis.

“We also tried to stay positive, there’s some criticism but guys understand how to take it,” added Seamans.

“Our guys finally put together a full team effort,” said Scanlon. “We’ve had individuals who’ve been playing hard all the time, but we haven’t put together that as a unit, and today we did.

Montrose Coach Dan Cherney knows exactly what his counterpart means and lamented that his team needs to work more cohesively and with a high level of intensity throughout the game.

“I get we’re young, I get we’re inexperienced, but there’s no skill for will, and if you are getting outwilled by team that’s not a good thing,” Cherney said.

“We just have to stay mentally engaged and do what we do best throughout the game, it can’t just be in spurts and flashes,” said Montrose Defender Nick Warriner.

Blue Ridge’s Ben Bleck led Kaleb Folk with a pass nine minutes into the game and the senior found the back of the net as part of the Raiders 3-0 halftime lead. Ryan Mills scored the first of his two goals with 14 minutes to go in the half and the Raiders received another on a Mountain View own goal.

Ben DeMark scored near the midpoint of the second half, but Mills countered with another goal a few minutes later. Blue Ridge outshot Mountain View by only two shots, 15-13, however were able to convert more. Eagles Goalkeeper Conner Richmond recorded six saves, while his counterpart Eric Hall saved four shots.

Forest City fell to Lakeland 5-1. Tyler Clift had the lone Forester goal and Goalkeeper Carmine Gigliotti recorded 12 saves. The Foresters bounced back against Carbondale exploding for four goals in the second half on their way to a 5-0 victory. Jay Lipko scored four times and Clift had a goal and assist. Gigliotti earned three saves.

Brandon Reed and Bryce Collins scored a pair of goals to lead Riverside past Elk Lake 5-2. Noah Johnson scored both goals for the Warriors and Goalie Jacob Kelley recorded 15 saves.

The next night the Warriors fell on Homecoming to Blue Ridge 3-1 as Mills again had two goals and Ben Bleck chipped in with one. Despite only being outshot 12-11 Elk Lake’s only goal came on a penalty kick from Nate Preston. Kelley registered five saves for the Warriors.

Montrose girls kept racking up goals and wins throughout the week, first dispatching rival Elk Lake 12-0 as Maddy Gilhool led the way with four goals and two assists. Fellow Seniors Gabby Davis and Brianna Spence each had a pair of goals and assists.

Thursday at Mid Valley, the Lady Meteors went on the attack and scored 14 first half goals on the way to a 16-0 win. Gilhool had five goals and an assist while Davis scored three and Spence had a pair. Also scoring for Montrose Lindsey Coy, Harper Andre, Katie Puterbaugh, Adams, Smith, and Sorenson.

Mountain View kept the win streak going with a 1-0 win over Dunmore as Cross scored the only goal of the game in the first half before leaving with an injury.

Elk Lake’s Maddie Bosscher took a pass from Tamara Voda in the second overtime and drilled it past the Holy Cross goalie to give the Lady Warriors a 1-0 Homecoming victory Friday night. Ives registered four saves for Elk Lake.

Be the first to comment on "Eagles prevail over Montrose"