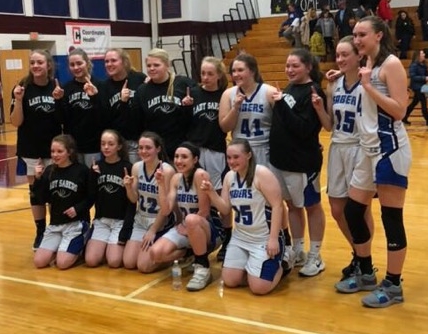 After an 11-day hiatus the Susquehanna Lady Sabers played three games in four days. For them, and their fans, it was worth the wait.

Susquehanna culminated the three-game stretch with a thrilling 49-44 victory over Weatherly to capture the District II/District 11 Class A sub-regional championship.

When Susquehanna Coach Kirk Fallon calls out “Mackenzie!” at practice, he can get several heads to turn. Opposing teams plan how to counteract 6-1 junior center Mackenzie Steele. But on Friday night it was Mackenzie Heath and McKenzie Rhone who led the way.

Heath scored eight straight fourth-quarter points, including a lay-up to give Susquehanna a lead they would never relinquish. Rhone hounded Weatherly’s star guard Emily Zoscin into 2-18 shooting performance to propel Susquehanna to the win.

“That was our game plan coming in,” said Fallon. “If we could take (Zoscin) out of rhythm, get her to earn all her points and disrupt their offense, then we had a shot.” 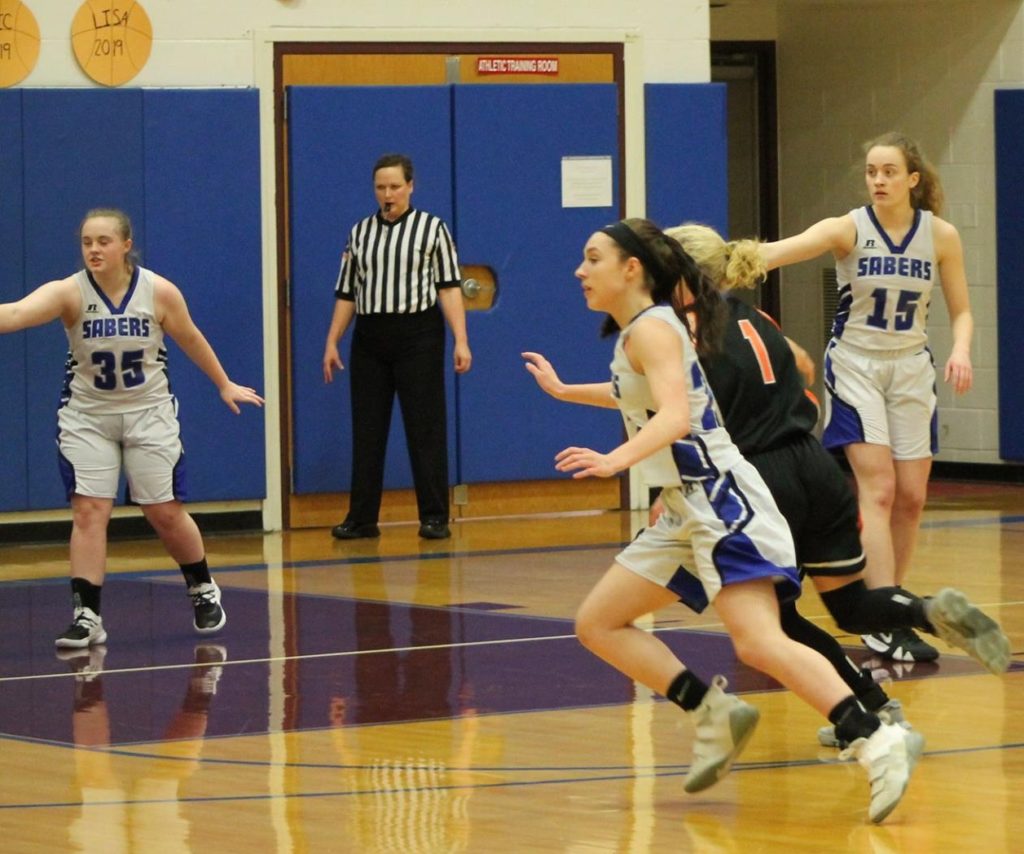 Rhone took on the responsibility and credited her teammates with helping her out. “She’s a lot faster, stronger compared to other girls I’ve guarded,” said Rhone. “But Coach Fallon and my teammates encouraged me and helped when needed.”

“It doesn’t show up in the box score sometimes, but no one does what McKenzie Rhone does for us,” added Fallon.

Weatherly came out with intense defensive pressure in the first quarter and jumped out to 8-0 lead before Taylor Hucyk responded with a pair of free throws and a lay-up to settle the Lady Sabers down and begin a 14-0 run.

Susquehanna squared the game as Steele scored twice in the paint on feeds from Heath and Rhone. The Lady Sabers seized the lead when Steele became distributor, kicking out to Huyck and Bethany Maby for wide-open threes to complete the run.

Weatherly would score on a put back with five seconds remaining to end the run and finish the quarter down 14-10.

“We knew they would come right after us,” said Fallon. “We turned the ball over more than we wanted, but we took care of it when it mattered most.”

Weatherly seized the momentum from there ripping off the first 8 points of the second quarter before two Steele free throws put the game into a back and forth. The lead exchanged twice and the game was tied two other times before the Lady Wreckers scored the final points to take a 25-23 lead into halftime.

Weatherly pressure would again force a couple early turnovers as the Lady Wreckers extend their lead to by three before a 6-0 Susquehanna run put the Lady Sabers in front.

Weatherly’s Lindsey Hoffman buried a three to knot the game at 31 and send the game into a back and forth shift between the third and fourth quarters.

Early in the fourth quarter, Maby hit a 16-footer to give Susquehanna a 35-34 lead. Heath pulled up for 3 of her 8 fourth-quarter points. But the Lady Wreckers scored 5 unanswered points as Megan Peifer nailed a trey and Zoscin converted a lay-up.

Heath responded with a drive and left-handed lay-up to put Susquehanna up to stay; and on the ensuing possession ignored Fallon’s plea for patience and buried another three from 23 feet to extend the margin.

“I’m yelling ‘no, no, no,’ and she probably hits the biggest shot of the game,” explained Fallon afterwards.

“I haven’t been scoring much, but I felt good, and I got shots where I wanted and took them,” said Heath.

Just under the four-minute mark, Huyck buried a three to give Susquehanna a seven point lead.

The basket closed over the next couple minutes for Susquehanna as short jumpers fell short and the Lady Sabers missed the front end of several one and ones.

Zoscin ended Weatherly’s scoring drought when she banked in a three and added two free throws with 1:17 left on the clock to cut the Saber lead to two.

After Rhone came up empty on another pair of free throws, Weatherly’s attempt to tie was thwarted by Steele who recovered from a scramble to swat a lay-up attempt. Huyck was fouled and swished two free throws to ice the game. She added another free throw when Weatherly Coach Kevin Kringe was assessed a technical foul after his team’s final shot fell short and time was added to the clock when the horn sounded prematurely.

Huyck led the way with 19 points and added 13 rebounds for the Lady Sabers and was instrumental in handling in the Weatherly press.

“We knew they were going to come after us and just had to remain calm and not let it get to us,” said Huyck.

Steele chipped in with 10 points, 16 rebounds and 7 blocks.

“We knew it was important to rebound and not give them second chances,” Steele added.

Road to the Championship

The Lady Sabers crushed Salem Christian 40-20 to set the stage for the Saturday sub-regional championship against Weatherly.

Susquehanna jumped out early as Taylor Huyck and Mackenzie Steele combined for 12 of Susquehanna’s first quarter points to lead 13-1 at the end of the first stanza.

They extended the lead to 22-7 before halftime and, if not for some missed shots and unforced turnovers, could have led by more.

After playing nearly even in the third quarter, Susquehanna outscored Salem 11-7 for the final outcome.

Huyck led the way with 17 points while Steele added 9 and Bethany Maby chipped in with 5. McKenzie Rhone corralled 10 rebounds.

Susquehanna primed up for the sub-regional tourney by facing Forest City at Mohegan Sun Arena in Wilkes-Barre as part of the District II Championships.

The match-up featured the two highest-rated girls’ teams in Class A, although Forest City failed to qualify for play in the District II-11 Sub-regional.

Susquehanna wasted little time in establishing control of the game as Huyck scored 4 of her 7 points in the opening quarter as the Lady Sabers opened with 9-0 lead and finished the quarter up 11-2.

With the sub-regional championship, the following night, Coach Kirk Fallon began substituting early in the second quarter. Susquehanna outscored the Lady Foresters 10-6 to take a 21-8 lead into intermission.

Forest City made a small run in the third quarter with a 6-3 run to cut the lead to 10, Maby scored 4 straight to close the quarter and were never threatened again in the 39-21 victory.

Steele led the way with 14 points while Maby added 9. Bella Pleska led Forest City with 8 points and Sarah Korty chipped in with 7 and 11 rebounds.

The Class A championship was the third straight for the Susquehanna girls team.

“It was an important win for us,” said Maby after the sub-regional championship game. “We set this as one of our goals going into the season.”

“To be the first team to win a league, district, and Sub-region is special,” she added.