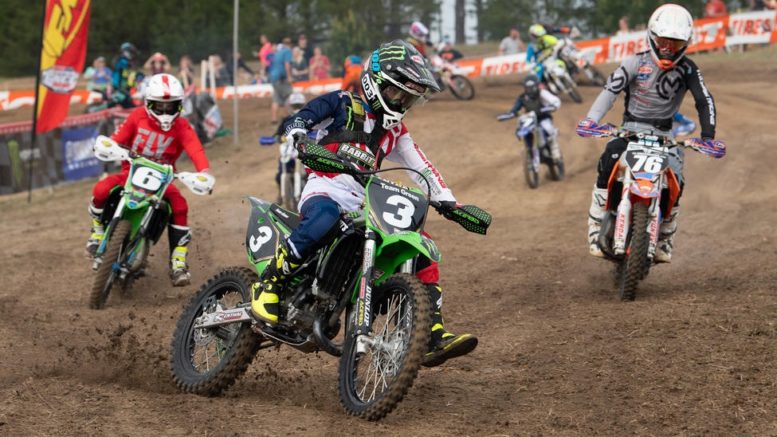 Grant Davis competes at the Camp Coker Motorsports Park in Society Hill, South Carolina in April. Davis won his class and 10 other races in the AMSOIL Grand National Cross Country Series YXC2 division during the 2019 season.

What started out on the hills and tracks of northeast 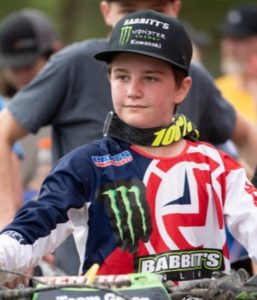 Grant Davis of Auburn Center waits for the action before one of his events on the AMSOIL Grand National Cross Country Series. Davis was the 2019 YXC2 champion.

Pennsylvania has taken Grant Davis all across the country.

The 14-year old from Auburn Center competes on the AMSOIL Grand National Cross Country Series for Team Kawasaki. GNCC races are just that cross country taking riders through the woods at high speeds.

Davis comes from a family of racers his father Bill racing before his sons were born, followed by an older brother, Nick. Grant won his first race when he was just three years old.

“Winning,” says Davis when asked what he enjoys most about the sport and during the 2019 season he did a lot of that.

Davis won his class 10 out of 11 races competing in the YXC2 Super Mini division to claim the championship and when moved up to the YXC1 Super Mini he won his first two races there to cap the season.

The series takes Davis up and down the eastern seaboard competing at tracks in Florida, North and South Carolina, and Georgia along with trips to West Virginia and the Midwest states of Ohio and Indiana. He and his family also had two shorter trips with races in Odessa and Harpursville, New York.

While Davis enjoys all the tracks his favorite was racing in Florida.

“I liked racing in the sand,” said Davis. “You can go a lot faster and it’s just different.”

Racing at this level requires a lot of practice and training both on and off the bike.

Davis practices on a track his father designed around the family property during the spring, summer, and fall and just after Christmas he will travel to South Carolina and practice at the facility of professional racer Steward Baylor.

The physical demands of the sport, races last over 90 minutes, requires Davis to train for his sport like many other athletes.  He trains several times a week focusing on his upper body and implements use of a rower and punching bag.

As a member of Team Kawasaki, the company provides the bikes that Davis practices and competes with. At his home were several motorcycles that are used only for practice purposes.

“They have mechanics that handle the maintenance and repair,” said Bill Davis “We just have to put them together after they arrive.”

Because of the travel involved and the time spent south during the winter months, Grant takes classes through an online charter school.

“It just became to difficult to coordinate with him missing so much during the winter,” explained Grant’s mother Lori Davis.

While the time on the road is demanding Bill and Lori are happy with the atmosphere and experiences that the opportunity has provided.

“It’s a family environment,” said Lori. “You get to know the other families and they are good kids.”

Grant also gets to interact with racers from other countries as one of his Kawasaki teammates is from Australia and while training at Baylor’s facility it is not uncommon to share the tracks with racers from Europe.

Within the Davis family everyone has a role as well. While Lori, a nurse, makes sure things are organized, Bill often finishes his work as a carpenter and drives the family’s motorhome to each event. Grant’s younger sister, Megan, isn’t just along for the ride.

While he trailblazes the youth competition today Grant holds out hope that someday he’ll cross the trails of the professional riders.

“I think it would be cool (to race professionally),” said Davis while sporting a cat-that-ate-the-canary-like grin.

Wherever the trail leads Davis will race, fast and furious.

Be the first to comment on "Davis blazes national trail"