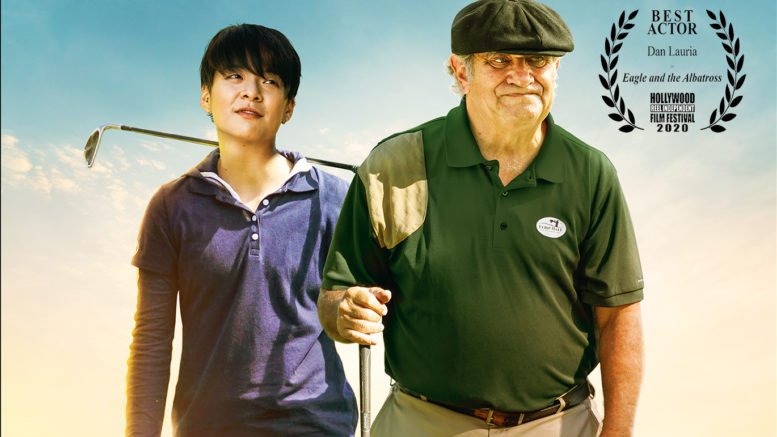 Eagle and the Albatross playing in Montrose, March 6-12

Independent filmmaker Angela Shelton doesn’t shy away from discussing her turbulent childhood, and rising from that, her search to find a father-figure and mentor.

She found that relationship with the late Jake Eberts, a producer, and local optometrist, Dr. Stuart Kaufman.

After filming the  drama, The Hammer (formerly titled Heart, Baby!), Shelton was looking to work on a project a bit lighter. She was dared to write a comedy, and then her husband added to the dare – challenging her to write a golf comedy. It was from these things that Eagle and the Albatross was born.

Sitting across the table from Shelton and Kaufman over lunch at a local restaurant, their genuine appreciation of one another is obvious.

In addition to being her friend, Dr. Kaufman is also Shelton’s golf coach. “Really he just yells at me,” she said, as he chuckled.

Shelton wrote “Eagle and the Albatross,” and filmed the movie in the Montrose Area and in various locations around the county. “I wanted to bring some economic love to the town,” she said. Scenes in the movie – which plays at the Montrose Movie Theatre, March 6-12 – were shot at Fern Hall, Tall Pines Players Club, Endless Mountains Health Systems, and Dr. Kaufman’s home and office. It also features appearances from a long list of local residents.

The theme of the movie is “belonging,” said Shelton. “Stuart is a total loner. I’m a big loner, too, even though I’m a people person. We just sort of hit it off,” she said of their friendship. “He’s my unwilling adoptive dad.”

The plot tells the story of an orphaned half Korean girl who finds herself in small town America with her only living relative. She seeks out a mentor to help her with the only things she loves – golf. A widowed optometrist, takes her under his wing in this irreverent comedy.

K-Pop star Amber Liu makes her film debut in the role of Ji-Min. K-Pop – short for Korean Pop – is a pop music genre that originated in South Korea.

Dan Lauria, of the Wonder Years, stars as the golfer and optometrist, Dr. Al Wiserman – a character inspired by Kaufman and Eberts. Earlier this year, Lauria won a Best Actor award for the role at the 2020 Hollywood Reel Independent Film Festival.

While Kaufman does not appear in the movie, his bright blue golf cart is prominently featured. And his is the voice that comes on the golf radio. “If you listen for him, you can hear him,” Shelton said, adding she now wishes she had pushed her friend harder to agree to be in the film.

Some scenes were filmed in Kaufman’s office and also at his home. “They closed off my street. That was the best part,” he said. The movie also includes shots of the interior of his garage – complete with golf clubs and tools. “Yeah, I’m ashamed of it,” he grinned, adding the crew actually rearranged some things to make it look worse.

SPOILER ALERT! Skip the next two paragraphs if you don’t want to know what happens before you see the movie!

In the film, Lauria’s character is diagnosed with ocular cancer. (Ebert died in September 2012 from a rare form of cancer of the eye which spread to his liver.)

Kaufman told Shelton he was fine with the character being based on him but Shelton said, He was like, ‘Why do you have to kill me?’” which was followed by, “Can I at least pay for the wrap party?”

AND YOU CAN READ AGAIN STARTING HERE: For her role as Ladies Golf Champ Tracy, Shelton gained 30 pounds. “It was a dare,” she said, adding she found it more difficult to lose those pounds now that she’s in her forties.

Shelton took a golf class when she was 14 but married into a golfing family. The first time she went golfing with them was in a tournament and was “hilarious.” “I won ‘Best of the Worst,’” she recounted. “And Stuart said, ‘You could be really good if you really played.’”

For now, Shelton has little time to play golf – much to Kaufman’s dismay – as she racks up frequent flier miles promoting Eagle and the Albatross; prepares for the May 5 release of The Hammer on DVD in Walmart stores; and spends as much time at her Montrose area home with her family.

Following showings and events promoting Eagle and the Albatross across the country this spring, the film is expected to be distributed worldwide in June.

Be the first to comment on "Golf, Friendship & Filmmaking"