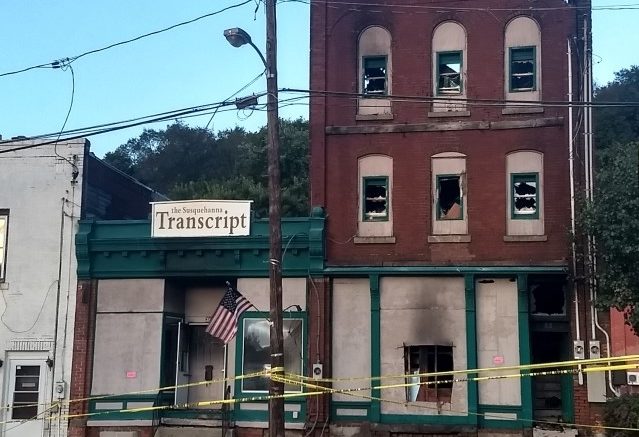 Arson charges lodged against the owners of the County Transcript Charles and Rita Ficarro were held over for trial following a preliminary hearing held Monday in New Milford District Court. The couple is accused of setting fire on Sept. 2, 2019, to the Susquehanna-based newspaper office and an apartment building they owned on Exchange St., Susquehanna. This photo was taken just days after the fire and the buildings have since been demolished. FILE PHOTO 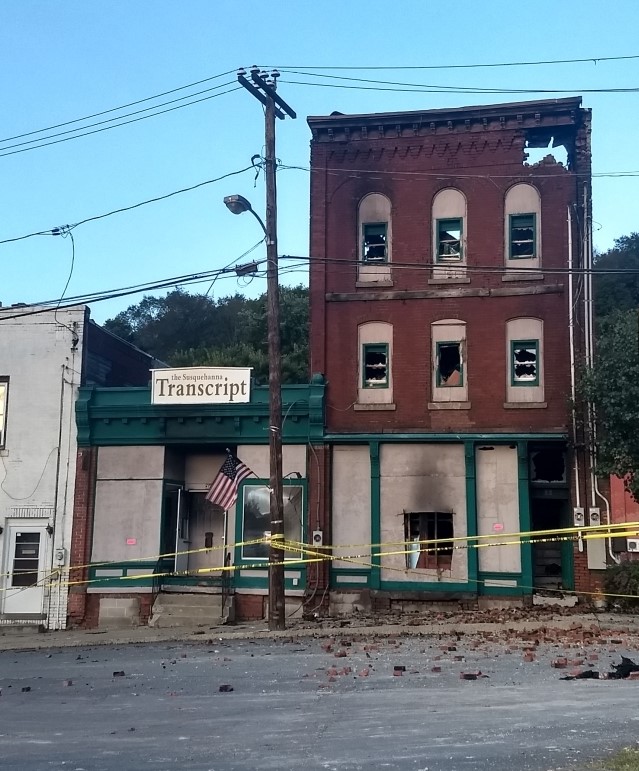 Arson charges lodged against the owners of the County Transcript Charles and Rita Ficarro were held over for trial following a preliminary hearing held Monday in New Milford District Court. The couple is accused of setting fire on Sept. 2, 2019, to the Susquehanna-based newspaper office and an apartment building they owned on Exchange St., Susquehanna. This photo was taken just days after the fire and the buildings have since been demolished. FILE PHOTO

Arson and insurance fraud charges lodged earlier this year against owners of a Susquehanna-based newspaper were bound over for trial in the Susquehanna County Court of Common Pleas following a preliminary hearing Monday in New Milford District Court.

Just prior to the hearing in front of Magisterial District Court Judge Jodi Cordner, charges for County Transcript president Rita Ficarro were amended and she now faces both arson and conspiracy counts in the fire that destroyed apartment building and the Transcript office on Exchange Street on Sept. 2, 2019. Both the commercial space and the apartment building were owned by the couple.

Attorney Jason Beardsley represented both Charles and Rita in court on Monday in the joint hearing.

Pennsylvania State Police Fire Marshal Tpr. Jason Mills was the only witness to offer testimony at Monday’s hearing – providing details of the investigation that had been outlined in the affidavit of probable cause filed earlier this year.

Tpr. Mills also offered testimony about the video surveillance footage captured from a camera at a convenience store located across the street from the Transcipt office.

According to the affidavit, at 9:06 p.m. on the date of the fire, the video camera captured a woman walking her dog past the apartment building, crossing the street and into a parking lot before walking out of view.

At 9:07, Charles and Rita Ficcaro pull in front of the business in their vehicle. Rita entered the building first and was followed in by Charles.

At 9:13 p.m., the woman walking the dog is seen walking back into the camera view and stops in front of the apartment building. She smelled and noticed smoke coming from the front of the building and called 911.

At 9:15 p.m., the video shows smoke coming out of the front of the apartment building, which becomes thick and encompasses the entire street.

According to the affidavit and Tpr. Mills’ testimony on the stand Monday, there was no indication of a fire within the building when the woman with the dog first walks by, or when the Ficarros enter the building. There was a two-minute span from when the couple left the building and the time the fire was discovered.

Tpr. Mills conducted an investigation of the scene on Sept. 3 and Oct. 1, 2019. He said he had been called to investigate by the Susquehanna Fire Co. Chief Kevin Kelly.

The affidavit contains detailed information of the scene and the fire damage. In the court documents and in testimony offered Monday, the origin of the fire was placed in the first floor closet and Charles is accused of lighting the contents of the closet on fire.

At the preliminary hearing, Tpr. Mills said evidence indicated the fire accelerated quickly, and discussed how he determined the origin of the fire based on physical evidence and reports from firefighters that initially entered the building.

Separate interviews with Charles and Rita were conducted on Oct. 9, 2019 at the Gibson barracks of the Pennsylvania State Police.

According to the affidavit, Charles told Tpr. Mills that he and his wife went to the Transcript to drop off their residential garbage and paperwork. An opening in the interior wall of the business led to the first floor apartment and that area was used as storage space for the Transcript. Charles said he placed the garbage near the front door of the building and unlatched the interior door to allow for the garbage hauler to access the room.

He told investigators that he did not see or smell anything suspicious while inside the business.

Charles was then shown the footage captured by the video camera and stated, “This doesn’t look good for me.” After several questions from Tpr. Mills, Charles stopped the interview and asked for an attorney.

Tpr. Sandra VanLuvender, assisted by Tpr. Mills, interviewed Rita who provided a written statement corroborating Charles’ account of dropping off garbage and opening the door to provide access. She also indicated she did not see or smell anything while inside the building.

She was told about the video footage and she asked for the audio recorder to be turned off. According to the affidavit, Rita said she was worried about what would happen to her husband, then proceeded to tell investigators that Charles had been planning the fire for awhile.

Rita said Charles wanted to set the fire because they didn’t want to go through another winter of paying the utilities for the apartment building. She also said the closet of the first floor apartment had been set up to burn but could not elaborate when asked to explain.

According the affidavit, on the statement, Rita was asked if Charles had made any statements about the fire or starting the fire. She wrote: “It has to be done. Think he was just talking out loud to himself.”

Celebrating with a birthday parade