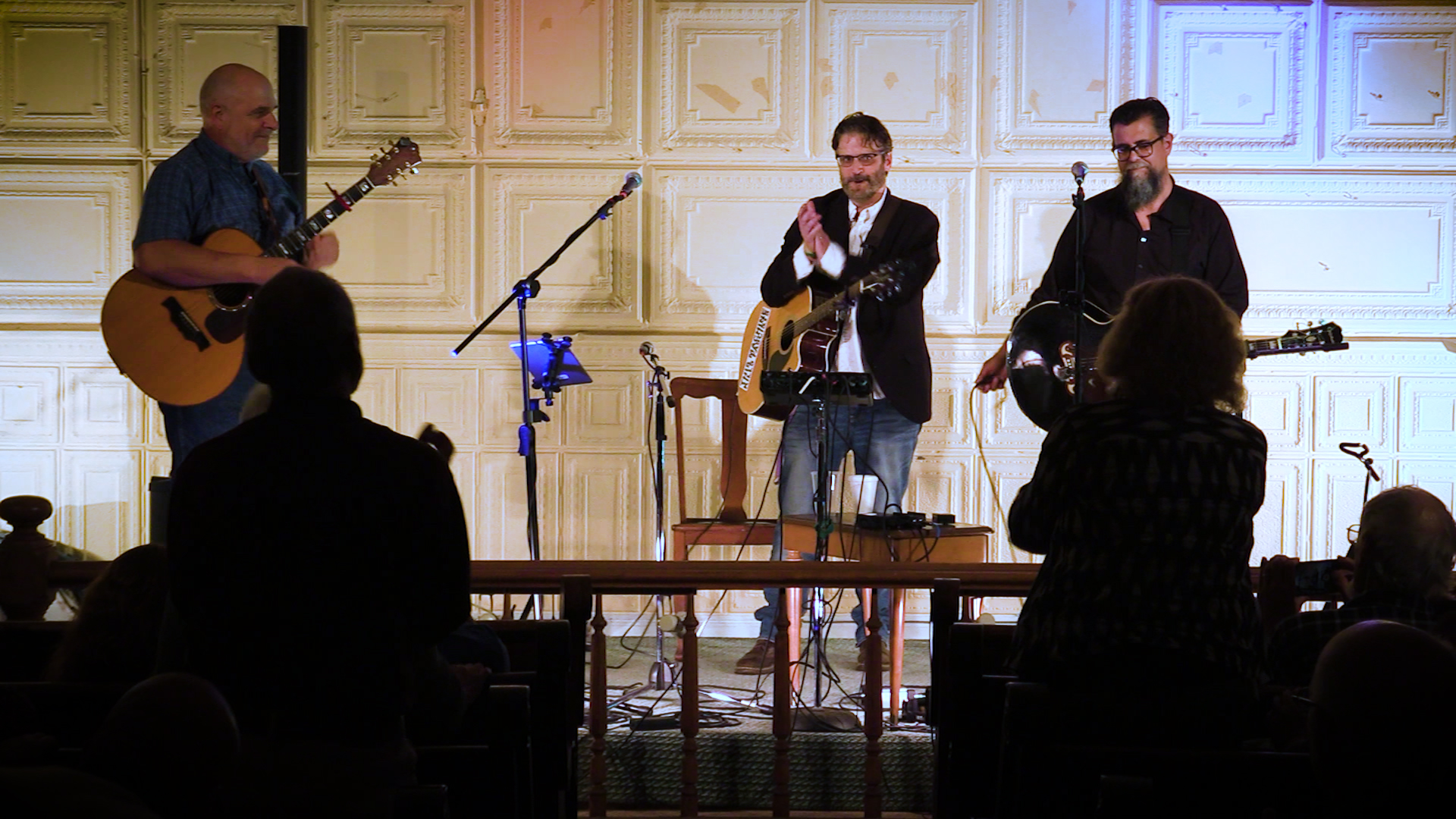 The final installment of the Old Lynn Concert Series, which was held in May 2019, featured (from left) Tom Flannery, Bret Alexander and Lorne Clarke. PHOTO COURTESY BELL, BOOK CAMERA PRODUCTIONS 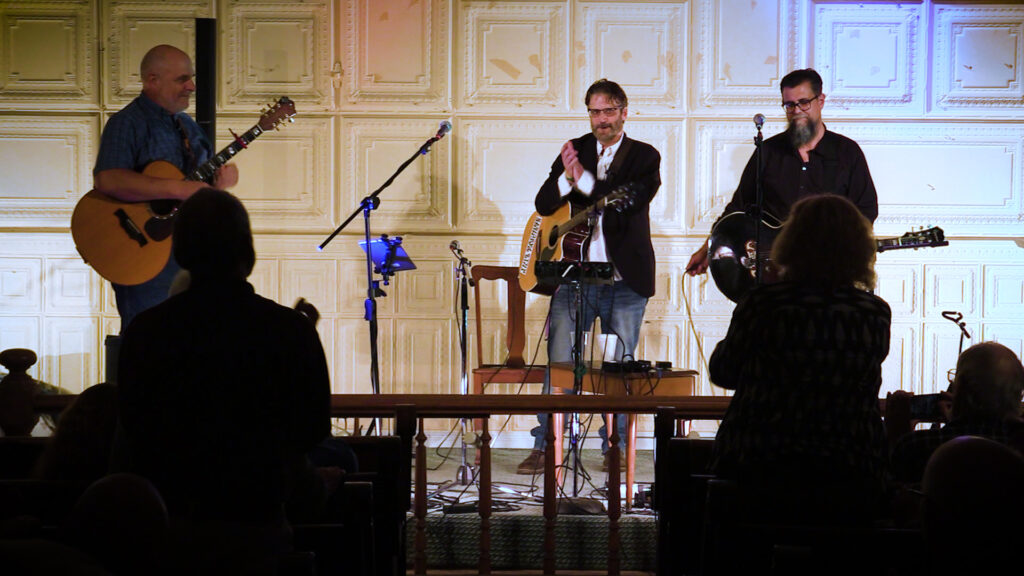 The final installment of the Old Lynn Concert Series, which was held in May 2019, featured (from left) Tom Flannery, Bret Alexander and Lorne Clarke. PHOTO COURTESY BELL, BOOK CAMERA PRODUCTIONS

For 19 years, fans of folk music and singer-songwriters headed to the former Lynn M.E. Church near Springville to enjoy live performances as part of the Old Lynn Concert Series. The music was presented free to the community, and guests often brought snacks and beverages to share. The final concert, featuring Lorne Clarke, Tom Flannery, and Bret Alexander was held there on May 25, 2019.

That performance is highlighted in a new documentary called “This Sacred Place: The Story of the Old Lynn Concerts.”

The documentary, directed by film producer Bruce Janu, also provides a historical perspective of the series via interviews with the performers. Janu began working with Clarke, Flannery, and Alexander in 2005 when they contributed songs for the soundtrack of the documentary on which he was working at the time. They followed up by providing a soundtrack for Janu’s “Crayons and Paper.”

“When Lorne told me that he was closing the Old Lynn Concert Series after 19 years, I wanted to document that show and the amazing history of this series,” Janu related on his Bell, Book Camera Productions website. “‘This Sacred Place’ is the story of how music can bring people together, even in a rural Pennsylvania town that does not appear on most maps.”

“The location is very remote,” said guitarist Dave Kuffa of Tunkhannock. “When you get there, you don’t believe you are in the right place. It’s literally in the middle of nowhere but, when you’re inside, you are at the center of a music universe.”

Kuffa managed a music store frequented by Clarke and was thrilled when he was asked to be the opening act for a show headlined by Ithaca, NY, folk and blues singer Patti Whitten.

Music had been a hallmark of the church since it was built in 1883, according to Janu’s website. Kuffa noted that old churches were built to amplify the sounds coming from the pulpit, and the phenomenal acoustics were appreciated by performers, which they also note in the documentary.

Around 1996, the Methodist Conference discharged both the Lynn church and one in Lymanville in Springville Township. That same year, heavy snows caused a partial collapse of the roof the Lynn church. According to Clarke, the trustees of the two churches incorporated into the Lynn Lymanville Community Church. The Lynn church was repaired, but services were no longer held there.

“After the repairs were done, the trustees wanted to say ‘thank you’ to the community and suggested presenting a music program,” Clarke related. “So we put on a concert featuring musicians from the area. Everybody enjoyed it and wanted us to do it again.”

Starting in the Spring of 2001, Clarke and his wife, Esther, along with friends Richard and Lisa Robinson began organizing more frequent shows with more established acts in the folk genre, many of them from Canada. The shows remained free, with musicians being paid from a free-will offering. Organizers also upgraded the venue by making it handicap-accessible and installing restrooms, often at their own expense.

“It was quite interesting because it brought in musical ability that we didn’t usually hear at the radio level,” longtime radio host and Wyoming County commissioner Ernie King related. “The basis of the music was the same for Canada and us.”

King and his wife, Marie, had long been fans of the folk music that was popular in the 1950s and ’60s and found many of the acts there, including the group featuring Clarke, to be in a similar vein as the Kingston Trio and Peter Paul & Mary.

Nick and Pat Shyshuk of Wallsville were early patrons of the series, having seen Clarke perform years earlier in a coffee house in Tunkhannock. “It was great to go out to a listening room to hear artists we didn’t know but often immediately liked,” said Pat, who would often plan her schedule around the shows. “We usually sat up close to the front, so we were just a few yards from the artists, and we could talk to them.”

The Shyshuks and other patrons formed personal connections with the musicians and would follow them to other venues. Pat crocheted a penguin for one her favorite artists, James Gordon, in honor of his “Sweaters for Penguins” song that he had performed at Lynn.

Attendance began to drop from more than 100 patrons to sometimes less than 50, so the Clarkes and Robinsons decided to take a break. “Maybe it had run its course,” Clarke suggested. “It’s a lot of work, and we presented the concerts for free. The artists don’t play for free, and they’re coming from all over the world. We had to pay them whatever we had contracted to pay them.”

“Lots of people are disappointed that it couldn’t continue, but we were all so enriched by the series,” said Shyshuk, whose amateur videos of the shows were sometimes posted on the Old Lynn Concert Series Facebook page.

“This Sacred Place” premiered Jan. 2 on Scener and has been well-received by those who have seen it. “The documentary tells the story better than I could. It was truly special,” Kuffa remarked. He misses the concerts but suggests that, if they hadn’t ended in 2019, it is unlikely that the series would have survived the pandemic.

Nonetheless, Kuffa hopes that the documentary can revive the Old Lynn Concerts in some form.

According to director Janu, “This Sacred Place” has been selected for inclusion in the Direct Monthly Online Film Festival at www.filmfreeway.com, where it can be viewed at no cost through the month of January. Until the documentary gets through the festival circuit, it will not be available for purchase. Janu hopes to see the short film aired on television as well.

The old Lynn church building sits empty at present, with a future as uncertain as any suspended program or entity right now. “We’ve had some inquiries, including a preacher who would like to use it,” Clarke explained. “But renting a church isn’t cheap. You have to heat it and keep it up.”

What does he think the chances are for a concert series revival? “Not until the pandemic ends for sure,” he stated. “But we’ll have to see.”