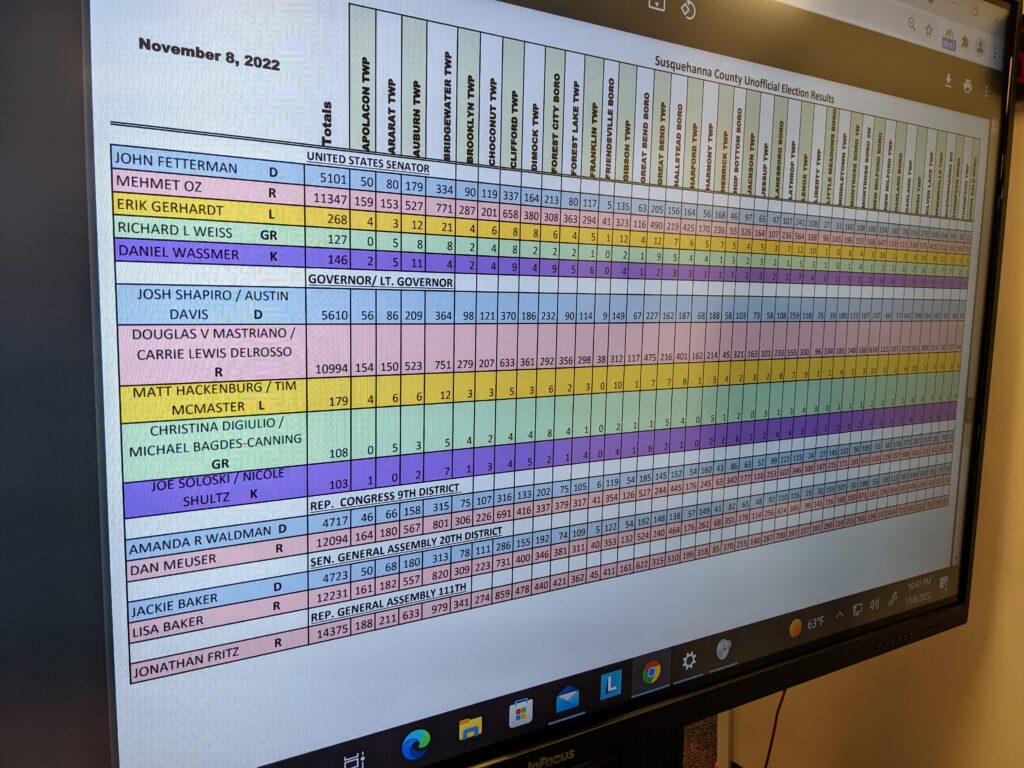 Unofficial election returns were posted on the screen at the Susquehanna County tabulation center on Tuesday, Nov. 8, as votes from the 41 precincts were tabulated. Counting of the unofficial returns on election night ended at about 11 p.m. STAFF PHOTO/STACI WILSON

Nearly 65 percent of Susquehanna County’s registered voters turned out for the Tuesday, Nov. 8, General Election, according to the county’s unofficial election results.

A United States Senate seat and the Governor’s race topped the ballot. The election was also the first following redistricting, which changed the US Congressional district and moved all of Susquehanna County into the PA Senate’s 20th District and the PA House 111th.

The county’s Returns Board convened Friday, Nov. 11, to be sworn in and reconvened on Monday.

Susquehanna County Director of Elections Macy Rudock said election day ran smoothly in the county. “We work hard to make sure there are no issues,” she said.

But statewide, the race was called for Fetterman in the early hours of Wednesday, Nov. 9, with the democrat securing 51 percent of the vote to Oz’s 46.6 percent.

The party-line held in the county down to the gubernatorial race, with Republican nominee and State Senator Doug Mastriano collecting 11,112 votes to current PA Attorney General and Democratic candidate John Shapiro’s 5,726.

Statewide, Shapiro garnered 56.3 percent of the vote to take the win over Mastriano’s 41.9 percent.

In Susquehanna County, Meuser received 12,234 of that vote total, while Waldman garnered 4,807 votes.

This will be the first term Meuser will serve as the representative for Susquehanna County. With Pennsylvania losing a congressional seat following the 2020 census which impacted current GOP Congressman Fred Keller and Meuser’s districts, Keller opted to not seek re-election to the US House.

Prior to the redistricting, the county was split between the 20th and 23rd PA Senatorial districts.