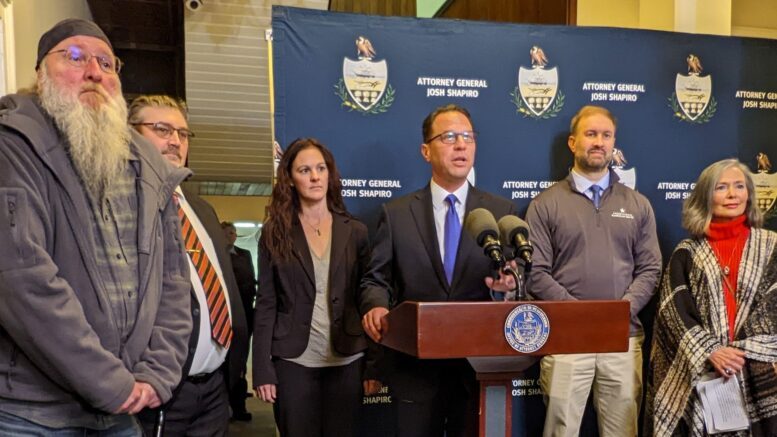 PA Attorney General Josh Shapiro (at podium) during a press conference held following Coterra Energy’s “no contest” plea last week to a misdemeanor clean water violation in the Susquehanna County Court of Common Pleas. Residents of Dimock, along with those involved in the resolution of the case, stood with Shapiro, from left: Ray Kemble, N. Scott Ely, Rebecca Franz of the OAG, Daniel Rickard of PAWC, and Victoria Switzer. STAFF PHOTO/STACI WILSON

PA Attorney General Josh Shapiro (at podium) during a press conference held following Coterra Energy’s “no contest” plea last week to a misdemeanor clean water violation in the Susquehanna County Court of Common Pleas. Residents of Dimock, along with those involved in the resolution of the case, stood with Shapiro, from left: Ray Kemble, N. Scott Ely, Rebecca Franz of the OAG, Daniel Rickard of PAWC, and Victoria Switzer. STAFF PHOTO/STACI WILSON

Coterra Energy, formerly Cabot Oil & Gas, entered a no contest plea to a misdemeanor count for negligently discharging methane into the Dimock-area water wells and agreed to pay $16.29 million for the construction of a local water system and distribution to the affected area in Dimock Twp. The settlement price tag exceeds the largest fine possible, said Attorney General Josh Shapiro following the hearing.

Charges were filed against the company in June 2020 by the Pennsylvania Office of the Attorney General prior to Cabot’s merger with Cimarex to form the new energy company. Coterra spokesman George Stark said settlement negotiations began over one year ago.

The main courtroom in the Susquehanna County Courthouse was filled by about 50 people – some residents in the affected area, as well as anti-drilling activists.

Two of the affected residents took the stand on Tuesday.

Nolen Scott Ely said that, since 2008, he had pursued many avenues to “make right the wrongs done in this area.”

He also spoke of the significant impact his family has felt in those years, with water issues occurring since before his children were in kindergarten – until now, as they head off to college. “They have never known a safe water source,” he said.

Ely said he hoped the drilling company has improved the process and “understand that they destroyed homed and families.”

“This is not a day of vindication,” Ely said. “It is a day of replacement.”

Susquehanna County President Judge Legg presided over the no contest plea deal with the following agreed upon details:

* Coterra will pay the mandatory $2,500 fine to the Clean Water fund.

* Details of the $16.29 million water well and distribution system – to be operated by Pennsylvania American Water Company (PAWC) – were also put on the record. The funds will be placed into an interest-bearing account in the Office of the Attorney General.

* Each property will have a $50,000 credit for the water – which is expected to cover the utility bills for about 75 years.

* While the water well/distribution system is being constructed, Coterra will install, operate and maintain water treatments systems.

*And, if the water system is unable to be completed, Coterra will maintain the water treatment systems for 30 years.

*If a property owner does not accept the treatment system or community water, Coterra’s obligation will be deemed as satisfied.

The agreement follows the property and not the current landowners.

In a press conference following the hearing, Shapiro said, ““Residents of Dimock have waited far too long for the clean water Pennsylvania’s Constitution is supposed to guarantee all of us.”

Coterra Energy released a statement following the court appearance: “Coterra has worked closely with the Office of Attorney General to resolve historical matters and create a path forward for all parties. As out operations today showcase, Coterra strives to follow best practices, exceed industry standards, and to continue to be a valuable community partner. We are committed to being a responsible steward of the Commonwealth’s natural resources and will continue to work closely with our landowners and community leaders.”

“This agreement brings justice to the residents of Dimock who for years had been ignored,” said Shapiro. “People across the country remember what happened here in Dimock, and now, they will know the rule of law won the day. Companies will take notice that we won’t allow communities like this to be taken advantage of or forgotten.”

In his statement, Shapiro said the agreement is the result of a thorough investigation and evaluation by independent experts to “sample and analyze the water contamination and develop and engineering plan that would best serve the needs of the residents of Dimock.”

PAWC will oversee the construction and operation of the water line. Construction is expected to take three to four years.

Although Switzer did not get to hear the drilling company deliver a guilty plea, she said, “I think $16 million is a good indicator of guilt.”

The resolution, Swtizer said, is the best scenario for residents. “The Attorney General got it done and I am grateful.”

Be the first to comment on "Driller to pay $16.29M to construct water system in ‘no contest’ plea agreement"