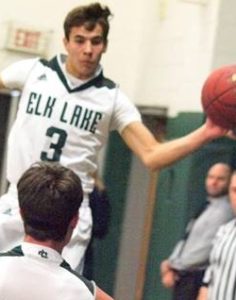 Rierdan Reyan, a senior boys basketball player from Elk Lake scored 39 points over two games, including the go-ahead basket, and stole the ball on the final defensive possession to help the Warriors capture the Championship at the Susquehanna County Holiday Basketball Tournament held at Blue Ridge High School. For these efforts, Reyan is the Independent’s Athlete of the Week.
Family: Parents – Rob & Holly Reyan; Brother – Tanner
Other Sports you play: I played soccer my first three years of High School.
Superstitions or rituals: I always keep my shoes tied even when not on my feet.
Things you enjoy doing outside of Basketball: Hanging out with my friends and hunting.
Three people you’d like to have dinner with? Grayson Allen, Duke Basketball Coach Mike Krzyzewski, and Russell Westbrook.
You had two great nights at the tournament, collecting 21 points versus Blue Ridge on the opening night and then 18 versus Susquehanna in the final. What was really working for you?
Moving off the ball was the key. My teammates were setting good screens, and I was able to come off them and get good looks. Whether it was the ball screens or down screens, I got good looks and guys were reacting to the defenders.
Take us back to that final minute of the Championship game, Susquehanna’s Mason Deakin hits a jumper to put them ahead and you come down and get the ball in your hands the ensuing possession.
We were just going punch for punch, and I knew we had to get the last punch in. I took the ball to the basket and the shot went in. It was quite the basketball game.
I thought early in the game Susquehanna tried to get very physical with you defensively, how did you keep your composure? I knew that a couple of their guys would try to do that, and they even did with some of my teammates. But you just have to be the bigger man and keep your head in the game.
What are your personal and team goals for this season? I’d like our team win the league title and compete for District title, and hopefully advance to the state titles. Individually, I hope to be an All Star and Division IV Player of the Year.
How does winning the Christmas Tournament help your team going forward? That especially will give us a big boost and showed how we need to up our intensity level. We’ve faced a lot of adversity already this season, so this should help us going forward.
What are your future plans? I’ve been accepted to Penn State Main Campus to study Animal Science and to the University of Northwest Ohio to study Diesel Technology. It’s just a matter of deciding what I want to do the rest of my life.
Being a Senior, you can start to see the light at the end of the tunnel, what do you want the Basketball Community and the Elk Lake fan base to remember about you as a player?
Obviously, I want to be remembered as a leader, but more importantly I’d like to think of me as a bank account, and that I made more deposits than withdrawals.

Be the first to comment on "Athlete of the Week: Elk Lake’s Rierdan Reyan"