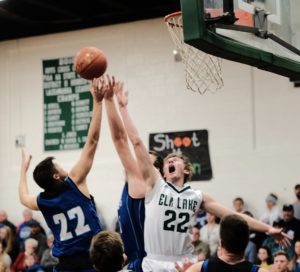 Kaleb Folk hit two free throws with less than one second on the clock to lift Blue Ridge over Montrose 47-45.

The Raiders got out early on the host Meteors. Sam Cosmello was 5-6 at the free throw line and scored 9 points to outduel Montrose’s Brennah Gilhool who had 8 points. Blue Ridge had a five point edge at the end of the first quarter.

The Meteors cut into that lead in the second. Gilhool tacked on 7 more points and the Meteors trailed 25-22 at the half.

The teams played even after the intermission, both putting up 12 more points on the board in the third.

Gilhool knotted the game at 45. Folk was fouled after taking a pass up ahead and attacking the rim.

Cosmello led the way for Blue Ridge with 17; Ben Bleck added 11; and Folk finished the night with 10.

Gilhool paced Montrose with 20; Tyler Rebello chipped in with 8; and Andrew Rapisardi scored 7.

Hunter Bomboy and Kyle Vanderfeltz each scored 8 points as the Warriors jumped out to a 20-4 lead. Blue Ridge regrouped in the second quarter holding Elk Lake to 4 to go into halftime down by 13.

The teams traded baskets in the third quarter. Blue Ridge surpassed their first-half total as Cosmello and Folk combined for 9 points and the Raiders scored 13. But Elk Lake maintained their lead as Bomboy and Kevin Valvano combined for 10 of the Warrior 15.

Bomboy paced the Warriors with 16 and Vanderfeltz finished with 13. Valvano chipped in with 10.

Cosmello led Blue Ridge with 10 points; Folk and Bleck chipped in with 9 each.

Susquehanna took the early lead as Mason Deakin and Adam Rockwell combined for 9 of the Sabers’ 11 points in the first stanza.

Montrose kept pace with Brennan Gilhool and Andrew Rapisardi combining for 7 of the Meteors 10 points.

Susquehanna extended the lead before halftime. Rockwell stayed hot with 7 more points and Gavin Baker came off the bench with 6.

With 8 points, Rapisardi kept the Meteors close as Montrose trailed 25-22 at the half.

The Sabers gained some breathing room in the third quarter holding Montrose to 8 points while Rockwell and Bryce Baldwin combined for 10 of the Susquehanna 13.

Montrose mounted a comeback in the fourth. Rapisardi hit two threes and scored 9 points in the quarter. Rebello chipped in with 7.

Deakin went 6-7 from the free throw line for the Sabers and Baldwin added 8 points to stave off a Meteor comeback.

Rockwell and Baldwin each finished with 16 to pace Susquehanna; Deakin added 12 and Baker had 8.

Rapisardi led Montrose with a game-high 20. Gilhool and Rebello chipped in with 10 and 8, respectively.

A slow start and a cold second half doomed Mountain View in their 49-33 loss to Lackawanna Trail.

The host Lions jumped out to a 13-5 first quarter lead with a balanced attack and a hounding of the Eagles’ leading scorer Mikey Schermerhorn.

The Eagles began to get into a flow in the second, outscoring Trail and closing the half down by 5.

Trail tightened down defensively after the half, holding the Eagles to 13 points. Schermerhorn’s 13 led Mountain View. 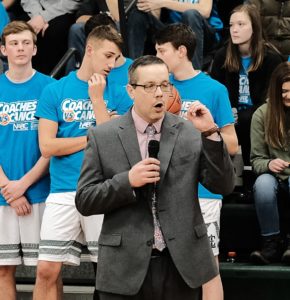 The Sabers used a fast start and pulled away in the fourth quarter to upend Elk Lake, 57-42.

Susquehanna jumped out to 16-9 first quarter advantage and led 30-24 at the half. Elk Lake cut the lead to 38-34 to start the fourth. But Deakin was solid at the line for the Sabers and Elk Lake had no answer for Baldwin inside.

Deakin led the way with 19 points while Baldwin and Canyon Stone each finished with 12. Nate Preston led Elk Lake with 16. Vanderfeltz added 9.

Mountain View traveled to Riverside for the Division III/IV Crossover game where the Eagles fell 55-47 to the Vikings.

Mountain View gained the advantage with a 10-8 first quarter but fell out of rhythm in the second and trailed 20-16 at the half.

Riverside extended the lead in third quarter. But, in the fourth quarter, both defenses softened, and both teams exploded for over 20 points.

Unfortunately, Mountain View could not keep the Vikes’ Brandon Reed off the foul line and he drained 9 of 10 free throws to prevail.

The following afternoon Mountain View used a quick start to upend Wyoming Area in a makeup of an earlier postponed exhibition game.

Schermerhorn had 21 points and freshman Ryan Henke scored a career-high 14 for the Eagles.

Blue Ridge bookended their week with their own heartbreaking loss to Forest City less than 24 hours after delivering a similar defeat to Montrose.

The Raiders had a one-point lead after the first quarter, but both offenses stalled through the middle quarters. Forest City took the lead at the half and played even in the third.

The game was tied at 40, with 1:40 left on the clock in the fourth. BR’s Cosmello was called for a player control foul and a subsequent technical foul. Forest City’s Corey Daniels hit one free throw to take a 41-40 lead.

On the ensuing inbounds the ball was knocked loose and Raider Folk fouled Daniels in the melee. Daniels knocked down both free throws and Jay Lipko added a pair.