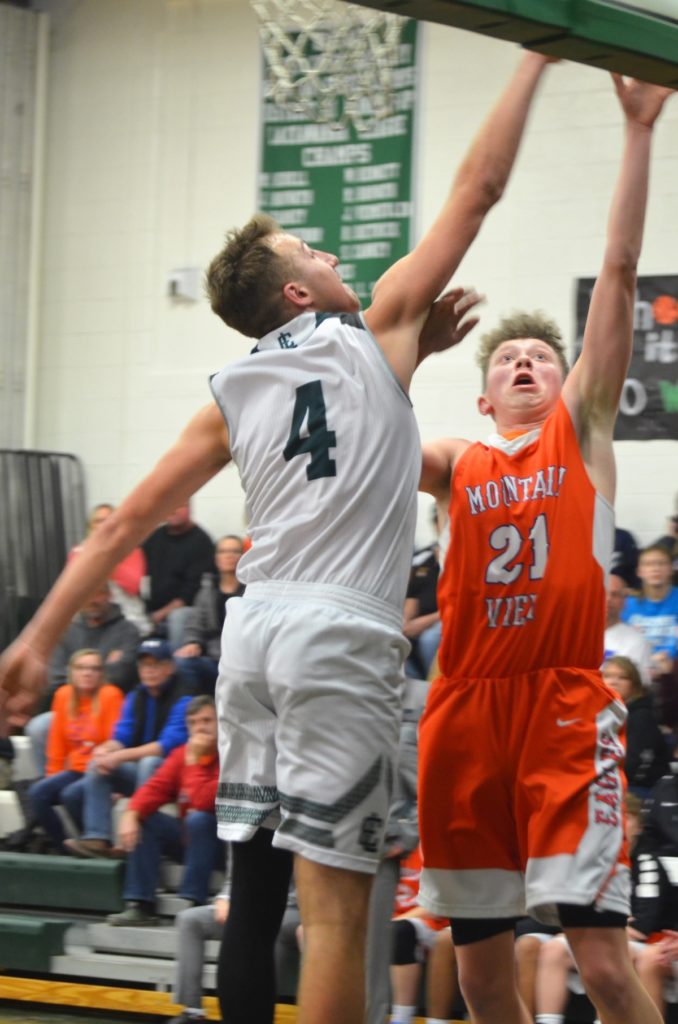 Elk Lake’s Hunter Bomboy (4) attempts to block the shot of Mountain View’s Mikey Schermerhorn. Mountain View prevailed 51-35 in the contest and with a win later in the week against Susquehanna put the Eagles in a tie with the Sabers. PHOTO COURTESY REBECCA WESCOTT

Same story. Different hero. Just like their first meeting Mountain View scored late in the game to give Susquehanna its second loss in league play. The Eagles joined the Sabers at the top of the standings heading into the final week of the regular season.

Freshman Ryan Henke’s free throw with 11 seconds left on the clock gave the Eagles a one point lead, 48-47.  Henke grabbed a rebound off a drive by Mikey Schermerhorn and was fouled.

The Sabers had an opportunity to win when Mason Deakin passed the ball to Canyon Stone in the corner. But Stone’s jumper fell short and the buzzer sounded during scramble for rebound.

To start the game, Susquehanna locked down on Mountain View’s Schermerhorn holding the division’s leading scorer to 2 points in the first half of the game.

Meanwhile for the Sabers, Bryce Baldwin powered his way to 15 first-half points and Stone hit a pair of threes to lead Susquehanna to a 26-22 advantage at halftime.

Schermerhorn got loose in the third quarter scoring 7 for the Eagles to help cut the Sabers’ lead to 2 heading into the fourth quarter.

Stone scored 6 more points while Wyatt Brozonis, Mike Fanelli connected from long range. Schermerhorn knocked down a three to knot the game at 47 to set up the climactic finish.

At Blue Ridge, Lackawanna Trail won every quarter to prevail over the Raiders, 57-46.

Kaleb Folk paced Blue Ridge with 13 points. Sam Cosmello and Carson Koehler added 9 and 8, respectively. The Raiders helped seal their fate with a 5-19 performance from the free throw line.

Elk Lake broke open their game at Forest City with 23-point third quarter on their way to a 57-40 win over the Foesters.

Hunter Bomboy scored 10 of his game-high 24 points during the stanza.

The Warriors got 9 points from both Adam Anderson and Kyle Vanderfeltz. Joe McAleer added 8. Corey Daniels led Forest City with 10.

Montrose traveled to Old Forge where a slow start doomed the Meteors as they bowed to Blue Devils, 46-37.

Old Forge doubled up Montrose by halftime leading 28-14. Montrose outscored Old Forge in the second half but could surmount a sustainable run. Brennan Gilhool led Montrose with 16 points and Jacob Weaver sank 3 threes to finish with 9.

The Sabers jumped out to a 19-10 lead after one quarter and tacked on 18 more in the second to take a 37-20 lead into the locker room. Baldwin scored 18 of his game-high 21 before intermission.

Canyon Stone finished with 16 points for the Sabers and Adam Rockwell chipped in with 11.

Folk led Blue Ridge with 11 who played without leading scorer, Cosmello. Ben Bleck added 9 and Calvin Scheideler chipped in with 7.

After two earlier division losses, Mountain View marked the start of their comeback week comeback with a 51-35 win over Elk Lake. 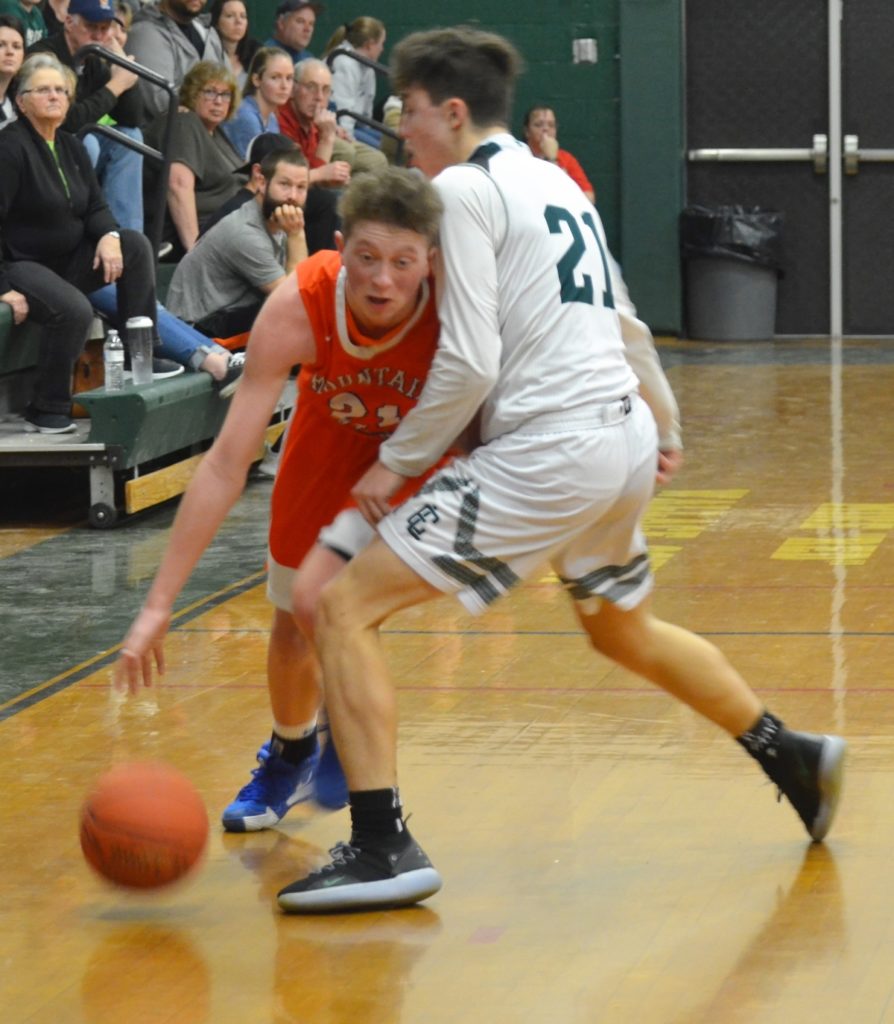 The Eagle defense held Elk Lake to single digits the first three quarters to build a 35-18 lead. Schermerhorn was again the top scorer finishing with 21. Fanelli added 11 and Tyler Henke chipped in with 8.

Bomboy and Nate Preston each scored 12 to pace the Warriors.

At Lackawanna Trail, Montrose rallied from a 14-point deficit to stun the Lions.

Weaver nailed a go-ahead three with 3.7 seconds left as the Meteors prevailed 48-46.

The Meteors jumped out to a four-point lead in the first stanza, but the offense went cold in the second and Trail outscored Montrose 17-4 to take the lead, 25-16, into halftime.

Trail increased the margin in the third tacking on 16 more for a 41-27 lead heading into the fourth. But the Meteors turned up the defensive pressure creating turnovers and empty possessions for the Lions.

Gilhool and Rapisardi led the way for Montrose with 11 each and Evan Snyder added 10 and Tyler Rebello chipped in with 8.

Forest City fell to Dunmore 75-36 as the Bucks jumped out to a 23-8 lead in the first and never looked back.

Be the first to comment on "Mt. View win over Sabers knots division leaders"