Representatives from Cabot Oil & Gas, along with GasSearch Drilling Services (GDS) met with local fire companies last week in meetings held at the Cabot office in Dimock and the Harford Firehall and presented 17 of the counties’ volunteer companies with supplies. STAFF PHOTO/STACI WILSON

Cabot Oil & Gas Corporation expects drilling to ramp up by 20 percent this year.

“We had a great year last year,” said Cabot spokesman George Stark at a meeting with area fire company representatives last week in Harford, “and we don’t see that stopping.”

Cabot’s investment in the Marcellus Shale is in Susquehanna County, Stark said. “There is no place else we operate absent right here.”

The opening of the Atlantic Sunrise Pipeline has helped get Cabot’s gas to market. The pipeline carries the gas from Susquehanna County where it meets a pipeline system in the Lancaster area. “(The gas) is going to places we were not capable to getting gas to before,” Stark said.

The cost of natural gas in those new markets has gone down, while the price paid to royalty owners has increased. Stark noted that people in the Boston, Mass., area are paying about $12 per thousand cubic feet. “They can’t get gas from here,” he said. “It’s a crying shame. Energy poverty is a real thing in New England.”

Stark told the firefighters that over the past 10 years, he hopes the companies are more familiar with the industry’s operations, including things they don’t need to worry about as well as things that are more concerning.

“There are a ton of trucks out there,” Stark said, “That is a major concern.” He explained that while the potential of incidents occurring on a drill rig are low, the possibility of a truck being involved in an incident is a more likely event firefighters would respond to. “There are more incidents where (our trucks) get hit,” Stark said. 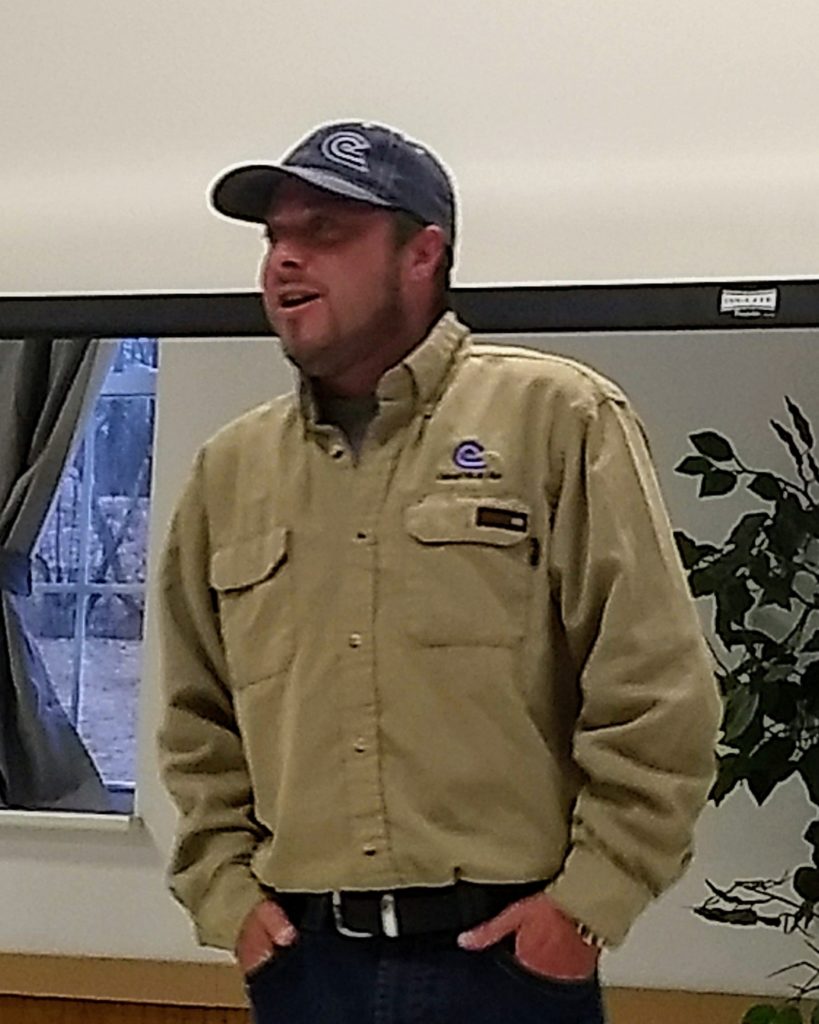 Chad Gorman, of GDS, talked about safety with the fire company reps at Thursday night’s meeting in Harford.

Chad Gorman, of GDS, spoke about the revamped mentor program in place with the company to better train drivers.

He also noted the company’s impressive safety record of traveling over 3 million miles with eight accidents – seven of which were minor scrapes of bumpers and grill guards at sites.

In 2013, GPS monitors were installed in all the vehicles. Gorman said the company saw a “huge change” in driver behavior then. He also said the system can be used by the company to address problems or respond to any complaints they receive.

Gorman said they are also asking the Dept. of Transportation for more road inspections for their trucks.

Gorman said the company needs to add 60 to 65 drivers and 12 mechanics to run its fleet of 67 vehicles in the county. By the end of the year, GDS expects to employ about 300. Currently they have just over 200 employees. A new facility is being built in Lenox Township to house 30-35 vehicles and a maintenance shop.

With CDL drivers at a premium, Cabot Bill desRosiers spoke about the training program in the works at SCCTC that should open within the next few months.

Some of the firefighters suggested the addition of a specialty course their drivers need to the training program.

Brody Webster, Cabot’s Safety & Environment manager, reported the company had an outstanding year for safety in 2018 with not a single reported injury in 300,000 work hours.

Along with the evening of dialogue, the fire companies were presented with equipment and supplies, along with a $500 line of credit with BX3 so they can purchase items based on their company’s specific needs.

BX3 will keep data on the items purchased in order to better see what the local companies are and are not using.