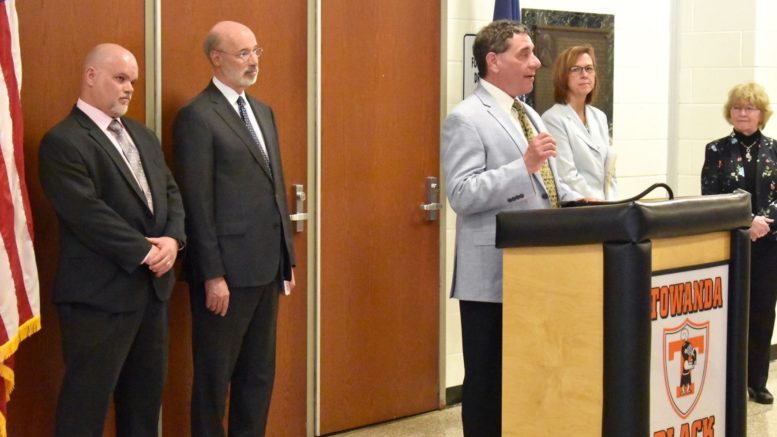 Governor of Pennsylvania Tom Wolf visited Towanda High School to tout his administration’s infrastructure initiative Restore Pennsylvania on Thursday morning. Wolf spoke in front of school administrators and local politicians in the high school lobby on how the plan would aid the county and specifically schools in the area.

The Restore PA plan aims to invest $4.5 billion over the next four years in infrastructure projects boosting high-speed, reliable internet, storm preparedness and disaster recovery among other projects — all paid for by a “commonsense” severance tax on produced natural gas in the state, according to Wolf.

Towanda Acting Superintendent Dennis Peachey and Progress Authority Executive Director Tony Ventello stood with the governor and spoke to the need of 21st century infrastructure in the county.

“The Towanda Area School District is thrilled that Governor Wolf recognizes the need to expand high speed internet service in the Northern Tier of Pennsylvania,” Peachey remarked after Wolf’s speech. “Our students and community deserve the same access to reliable broadband internet service as their counterparts across the state. Our district has invested in providing our students with the technology they need to be successful in today’s world. It is our hope that as technology continues to permeate the classroom, that students will have the same access in their homes and throughout our region.”

Ventello highlighted a plan at the event spearheaded by the Bradford County Commissioners, The Progress Authority and Hunt Engineers Architects Surveyors to install a dark fiber network in the county, connecting schools, emergency services, residents and more to an infrastructure that would allow state of the art connectivity.

“The real challenge is too many miles of road and not enough people in our topography,” Ventello said of the hurdles that rural areas must clear to bring their infrastructure to modern levels. “That goes with everything. Any service delivery I’ve ever been involved with in this county, all of the reasons that we love it here, all of the natural beauty that we have here poses challenges for service delivery.”

The dark fiber network would provide the “middle road” for modern high-speed internet service to reach potential customers according to Ventello. Private internet service providers have been reluctant to install a dark fiber network in rural areas for fear that they might not be able to recoup their investment as easily as they would in a urban area.

“We have to overcome that geography,” Ventello added.

The lack of 21st century infrastructure in the area was immediately apparent to Wolf on his visit.

“I flew in to the Towanda airport and almost couldn’t land because the GPS was dodgy,” Wolf told the Review with a laugh after the event. “You don’t really think about this but life in modern society requires connectivity. It’s not only that life would be so much better with it, it’s that you’re not going to be able to have life in the 21st century without it.”