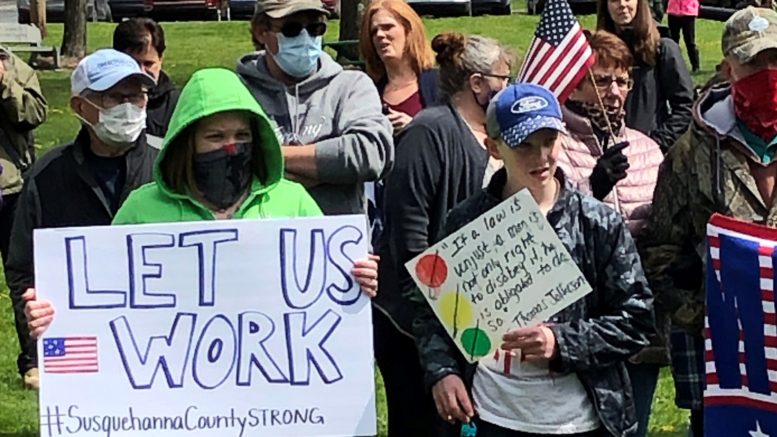 Susquehanna County Sheriff Lance Benedict and Commissioners Judy Herschel and Alan Hall address a group of protestors that gathered on the Green in Montrose Monday morning to call for the re-opening of businesses in the county. STAFF PHOTOS/STACI WILSON 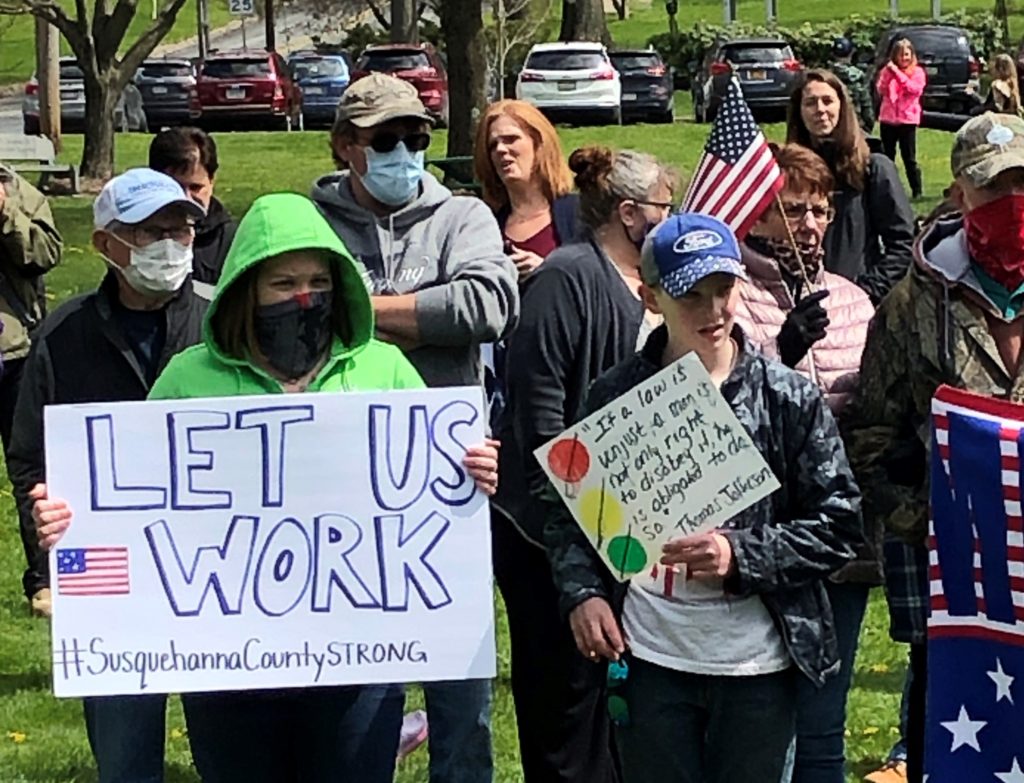 “Open up! Open up!” chanted a group of over 60 protesters that gathered on the Green in Montrose Monday morning. After a press conference held earlier that morning, some elected officials made their way to the group and were met by a chorus of “God Bless, America,” followed by the chant.

The failure of Susquehanna County to be moved from the “red” stay-at-home order to the “yellow” phase of aggressive mitigation that would allow businesses to re-open prompted the protest.

There were several tense exchanges between protesters and the commissioners, as the demonstrators called for the county leaders to defy Gov. Tom Wolf’s stay-at-home order and allow businesses in the county to open. Few protesters engaged in social distancing, but the majority of people present wore face masks, while others removed their masks while speaking, and some made no attempt to cover their face.

Some protestors took a more humorous approach, with this sign asking others to stop hoarding TOILET PAPER. STAFF PHOTO/STACI WILSON

When confronted by the local leaders about the lack of social distancing one protester challenged, “Arrest us all!” and another proclaimed, “We’re not sheep!”

Hall said decisions are being made in Harrisburg by people who know nothing about Susquehanna County.

“Unfortunately, people say the lines are drawn,” said Sen. Lisa Baker, “you are either for safety or for big business.” She offered that there is a middle ground. “Most would feel safer in a small business than a big box store.”

“State officials do not understand the difficulty of recovery in a rural area,” Baker said.

She said people’s lives have been “devastated” and residents “want a clear idea of when to move ahead safely. People don’t trust the wisdom of the state government opening Pittsburgh and Allegheny County before Montrose and Susquehanna County.”

She called for the county to be able to move forward “appropriately,” and called for fairness, transparency, and accountability from the state.

Baker also said that, last week, Sec. of Health Dr. Rachel Levine said the state was considering robust testing. “The time for testing is now,” Baker said. She also said local residents would not likely travel to the testing site set up in Luzerne County. She said she asked that mobile testing units be deployed but received no answer.

“To say it is frustrating to represent a region that is identified and misidentified by the administration – they don’t know who we are, where we are and what the impact has been to the people – and that’s what’s been frustrating when I hear from individual businesses and families,” Baker said.

Baker called the regional consideration “arbitrary.” The county has been grouped into the northeast region for coronavirus tracking but is a part of the Northern Tier Planning group, which also includes Bradford and other neighboring counties that were among the first to move to the yellow reopening phase. 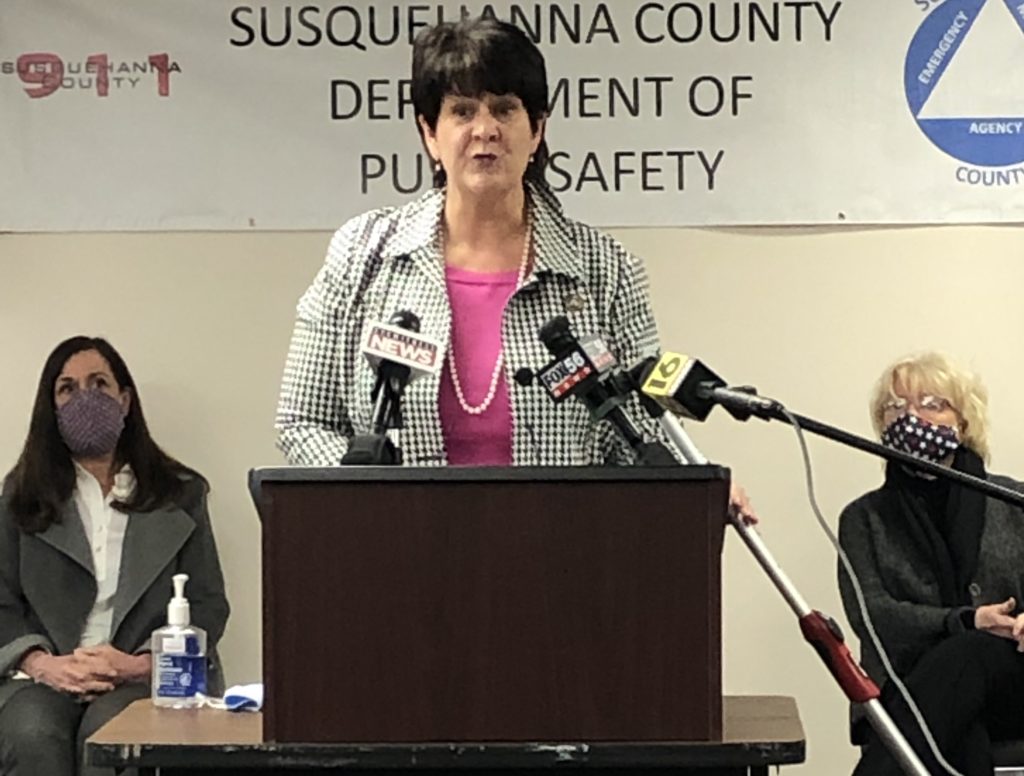 Susquehanna County Commissioner Elizabeth Arnold requested Gov. Tom Wolf include Susquehanna County in the next announcement of counties that will move to the Yellow Phase of the state’s reopening plan. STAFF PHOTO/STACI WILSON

She expressed frustration over the state’s response to local lawmakers, which she called “non-existent.”

Sen. Gene Yaw acknowledged that COVID-19 is a serious problem. “We know where the problem areas are in Pennsylvania,” Yaw said.

Years ago, Yaw said, if a person had measles or mumps, the property was quarantines by the county health department. “We quarantined sick people, not people who weren’t sick.”

Yaw added that people are fearful, and some in need of health care won’t go to a hospital because they are afraid.

Pennsylvania residents “work at problems and follow the rules, provided what is asked makes sense,” Yaw said. “The key to this is logic. Susquehanna County in 14 days had no cases. What logic is there to being shut down? (The county) should go directly to ‘green.’”

He also objected to what he described as the state’s “cookie cutter” approach to regions. “I can’t see the justification for absolutely destroying the economy of Pennsylvania and in parts of Susquehanna County.” 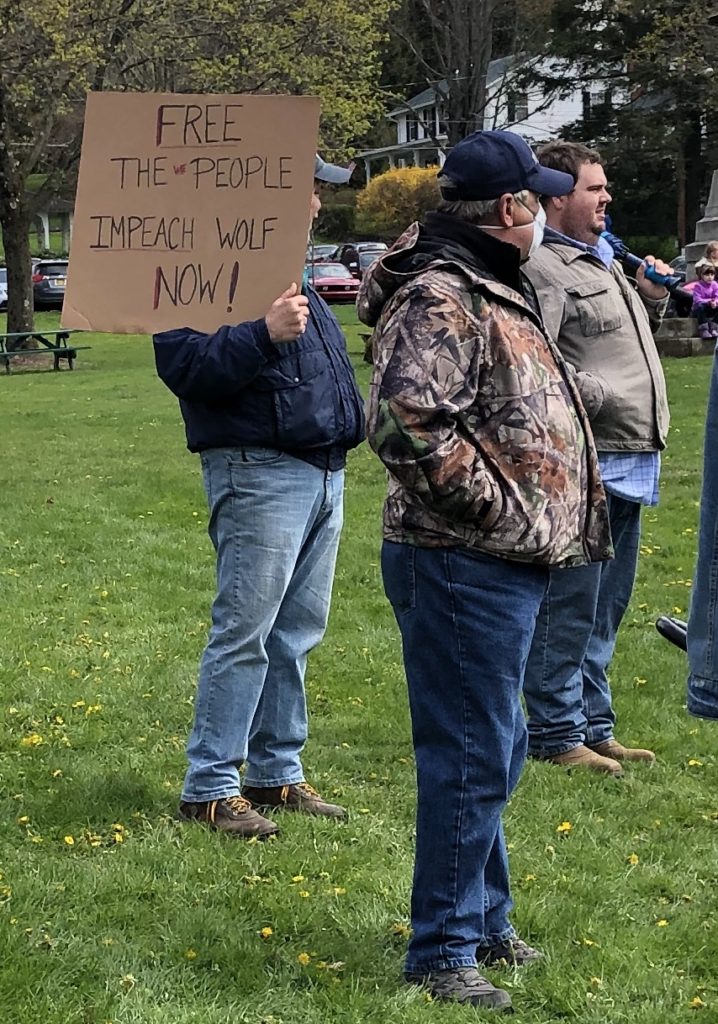 “No one knows this county better than (the county commissioners) do,” said Rep. Tina Pickett. “Gov. Wolf was absolutely wrong on Susquehanna County. This county needs to be allowed to move forward.”

Rep. Jonathan Fritz joined is the call to open the county. “Our rural economy is on life support,” Fritz said. “Examine the numbers and do what’s right in Susquehanna County,” he challenged state officials.

Commissioner Arnold said, “Last week we eagerly anticipated Friday’s announcement, hopeful we would be allowed to move to the yellow phase.” She said the commissioners were “dismayed” and “disheartened,” and Arnold said they also felt “disrespected” when the county was not included with the group that moved to the yellow phase of reopening.

“We hear it about the time you hear it,” Arnold said, “… on the internet.” She said the omission of Susquehanna County from the list of counties being moved to yellow on May 15 was distributed online before the commissioners were notified.

Arnold said that when she is out she sees people social distancing, wearing face masks, and being respectful of each other. She asked Gov. Wolf to put Susquehanna County in the next roll out, and said she had confidence local businesses would adhere to CDC guidelines.

Arnold also held back tears as she spoke about the personal toll of quarantine. “My own dad is 91 years old,” she said. “I miss him terribly. I haven’t been able to see him.”

Commissioner Herschel said small businesses in the county have been “hit hard” by the shutdown. “I get the frustration,” she said. Herschel also said that she has been requesting clarity from the state about what would be required for the county to move from red to yellow. 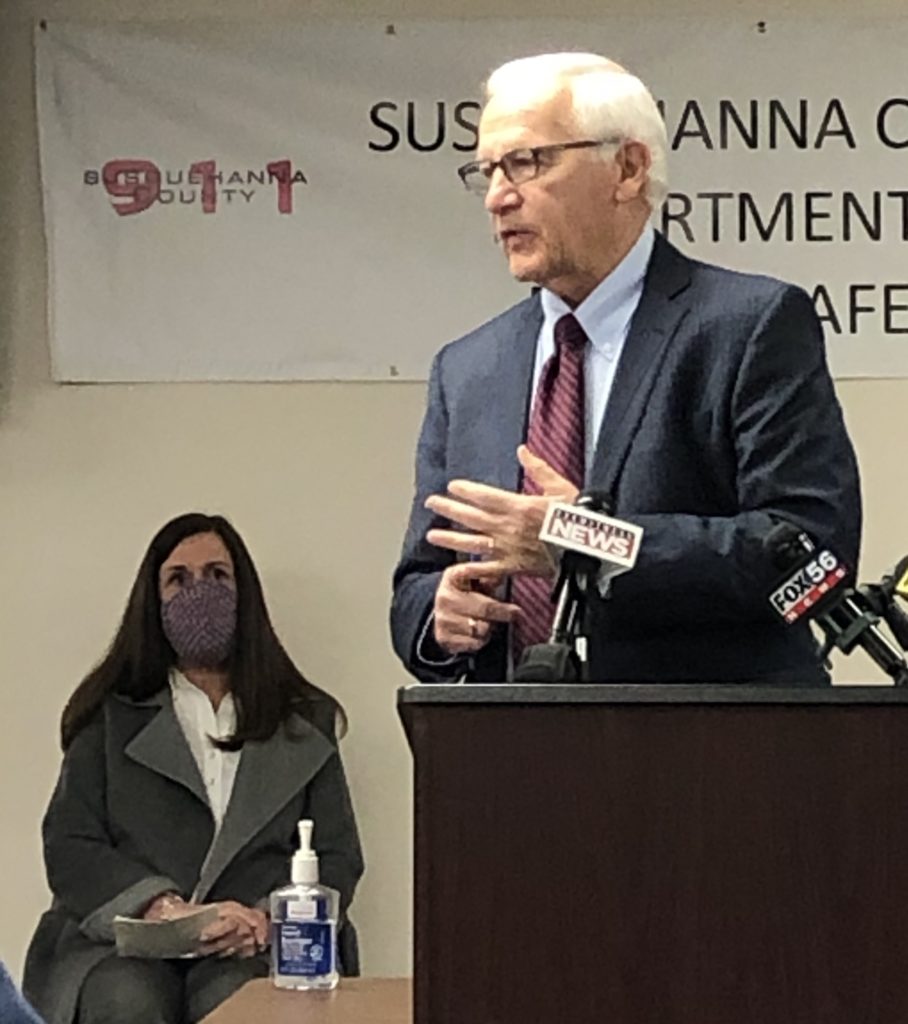 Sen. Gene Yaw, with Sen. Lisa Baker (seated) at the Monday, May 11, press conference in Susquehanna County. Both took issue with the state’s “cookie cutter” approach to the phased reopening. STAFF PHOTO/STACI WILSON

Hall said Susquehanna County is comprised of small businesses. “Why can big box stores be open but small retail can not?” he questioned. He warned that the continued, mandated closure would likely drive a number businesses to permanently shutter their doors.

“One size does not fit all,” Hall said, of the factors used by the state to determine whether a county can reopen. “Tell us what we need to do to move forward.”

As the protest started to wind down, Gov. Wolf launched his own press conference Monday issuing warnings to counties to “stay the course,” follow the law or face negative consequences.

“Pennsylvanians are fighting for our lives,” Gov. Wolf said. “We have fought this deadly virus in the best way we can, and sacrificed in ways we could never have imagined. It has been a new kind of heroism – in many ways a quiet heroism. These heroic acts deserve to be met not by surrendering, but by staying the course.”

The governor reiterated that reopening too soon can cause COVID-19 to spread, for cases and deaths to spike and for closures to be reinstated perhaps for much longer.

Reopening decisions are based on the advice of scientists, medical professionals, and the state’s epidemiologists. Factors that inform decisions include case counts, modeling, geographic location, contact tracing and testing capabilities for individual counties, regions, and the state. Each county is considered individually before deciding on placement into the red, yellow or green phases. Yellow counties have a lower risk of virus spread. Red counties have a higher risk of virus spread.

“I cannot allow residents in a red county to get sick because their local officials can’t see the invisible risk of the virus in their community,” Wolf said. “So, I must, and I will impose consequences if a county locally lifts restrictions when it has not yet been given the go-ahead by the state.”

The governor outlined the following consequences to counties that do not abide by the law to remain closed:

*Counties will not be eligible for federal stimulus discretionary funds the state receives and intends to provide to counties with populations of fewer than 500,000.

*Businesses in counties that do not abide by the law will no longer be eligible for business liability insurance and the protections it provides. The Pennsylvania Department of Insurance released details of this earlier today.

*Restaurants that reopen for dine-in service in counties that have not been authorized to reopen will be at risk of losing their liquor license.

*County residents receiving unemployment compensation will be able to continue to receive benefits even if their employer reopens. Employees may choose not to return out of concern for personal safety and safety of co-workers.

Susquehanna County Commissioners had indicated that they would not move to reopen the county against state orders and jeopardize the licenses and insurance coverage for local businesses. 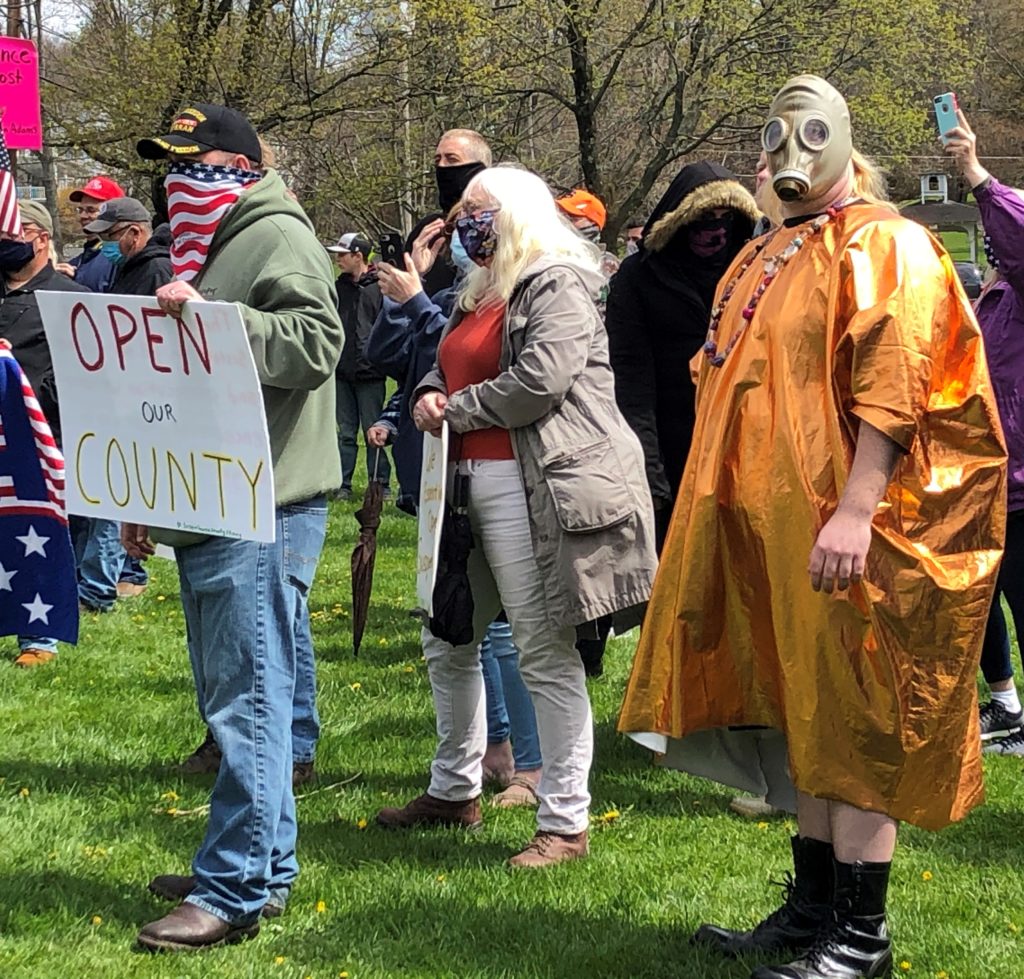 One protestor took masking seriously, donning a gas mask along with what appeared to be a metallic orange rain poncho. STAFF PHOTO/STACI WILSON

Be the first to comment on "Susquehanna County sees RED"