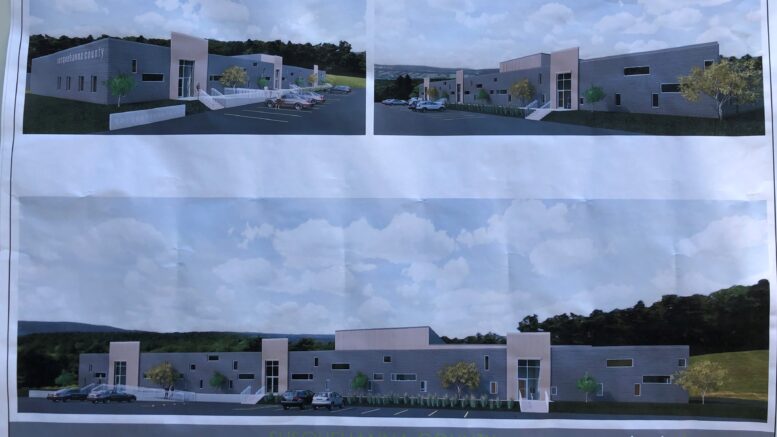 Architectural renderings of the new Public Safety Building, which will house the county's Emergency Management and 911 departments, as well as the Coroner's office and the New Milford District Court office. STAFF PHOTO/STACI WILSON

Cold weather has stymied progress on the construction of the county’s public safety center in New Milford Twp., but commissioners say the $20 million project is still on target for completion around mid-June of this year.

Commissioner Alan Hall reported that the outer walls of Buildings ‘A’ and ‘B’ are completed, and work continues this week on installing structural steel and roofing.

Hall said there is about 16-inches of frost in the ground, and heaters are running so the floors can be poured in mid-February.

Building ‘C’ – a PPE storage building for which the county received a grant to construct – has been completed.

The facility will bring the county into compliance. The current set-up for emergency management and 911 utilizes the basement of the county office building in Montrose, as well as offices on the main floor.

The county borrowed no money for the construction of the public safety center – instead saving about $15 million of its Act 13 revenue over about five years to pay for the construction. Grant money has funded other aspects of the projects, such as equipment and towers.

At the Jan. 27 meeting, the commissioners approved three contracts for communications and networking services at the public safety center.

The county contracted with Tu-Way Communications, Inc., for the relocation of call handling equipment from the current 911 Center in Montrose to the new 911 center. The total cost for the assembly, installation and construction services is $45,510 and the total cost for the installation of the remote VESTA network connection is $5,111.63, to be paid with PEMA funding.

A contract with Shadow Technologies was approved for network equipment, hardware, software licensing, and engineering services at a cost of $278,121.73 and $198,871.01, paid with a combination of Act 13 and PEMA funding.

The commissioners also approved a contract with Guyette Industries for the installation and hardware for the phone systems at the public safety center, at a cost of $29.609, paid with Act 13 funding.

The commissioners acknowledged the prison board’s hiring of Bruce Hall, of Vestal, N.Y., to the position of Warden/Outreach Support, effective Feb. 8.

Commissioner Hall asked that the meeting minutes reflect that the new warden is not related to him and that the commissioner was not involved in the hiring process.

The commissioners said the newly selected warden has a strong background with the criminal justice system, and previously served in law enforcement in the Elmira, N.Y., area and has also worked as a state investigator.

The commissioners approved the hiring of Jonathan Terry to the position of 911 Systems and Public Safety Building IT Technician, effective Feb. 8, per the recommendation of Bradley Ellsworth, Director of Public Safety Operations/911 Coordinator and Stephen Janoski, IT Director/GIS Coordinator.

The resignation of April Strohl from the position of IT Technician was accepted, with regret, effective Feb. 5.

Be the first to comment on "Despite weather, public safety center on target for June completion"