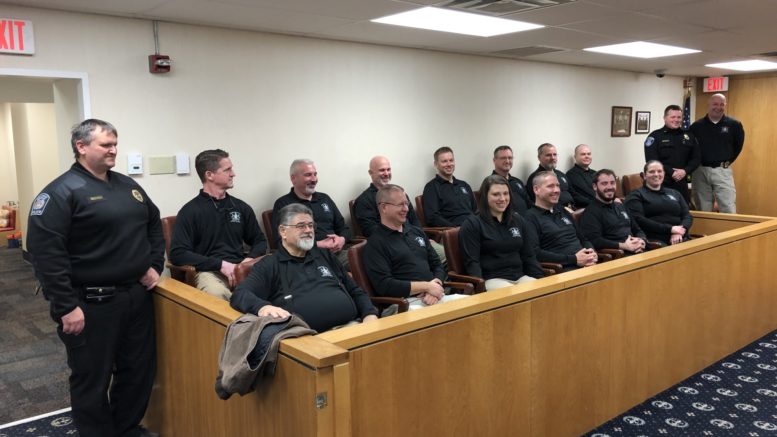 County detectives overflowed from the jury box in Courtroom 2 as they each were sworn in by the judge. 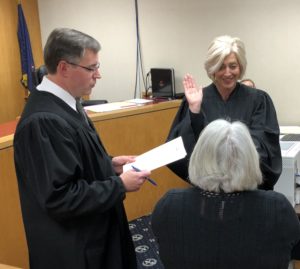 Magisterial District Judge Suzanne Brainard was sworn in for a six-year term by Judge Jason Legg. Brainard serves in the Clifford District Court.

oaths of office in swearing in ceremonies conducted by Susquehanna County President Judge Jason Legg. With the historic main courtroom undergoing renovations, the ceremonies were conducted in the Courthouse’s Courtroom 2.

Re-elected commissioners, Elizabeth Arnold and Alan Hall, are now officially joined by minority commissioner Judy Herschel. Herschel’s husband, Erick, held a family bible, and she was also joined by her two sons in the afternoon ceremony. Earlier that morning, Arnold was joined by numerous family members as she took the oath of office and her father held the bible. 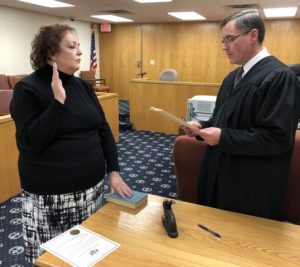 Register/Recorder Michelle Estabrook was sworn in for her second term by Judge Jason Legg.

District Attorney Marion O’Malley won election to the seat. She was appointed in February 2018 as the district attorney following the death of Robert Klein in December 2017. O’Malley won a primary bid on the Republican ticket over Bill Urbanski, who had served as Klein’s assistant and who challenged her appointment.

In addition to O’Malley, Assistant District Attorney Mark Darmofal was administered the oath of office; as were the county detectives, including those in the ranks primarily serving as school resource officers. 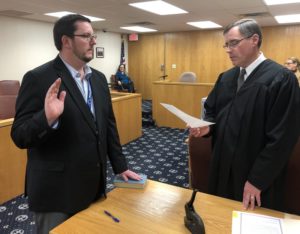 Michelle Estabrook – along with the deputies of each office – were sworn in by the judge.

Coroner Anthony Conarton took the oath of office early Tuesday, and deputies Jessica Chiarmonte and Sean Hennessey, were also sworn in by the judge.

Newly elected county auditors, Rick Ainey and Bob DeLuca, were sworn in, and join auditor Richard Suraci, who was re-elected to serve a second term.

School of PNG moving out of Susquehanna County

Be the first to comment on "Elected officials take oath"